Birgitta Birgersdotter was a religious mystic, visionary and author. She is the only Swede to have founded a religious order and was also the first Swede to be canonized a saint. Her piety contained a significant element of mysticism, which was embraced in particular by women in late-medieval Europe.

Birgitta was the daughter of Councillor of the Realm and magistrate of Uppland Birger Persson and his second wife, Ingeborg Bengtsdotter, herself the daughter of Östergötland’s magistrate. Birgitta was born into the core of Sweden’s social, political and economic elite. Her early childhood was spent on her father’s farm Finsta in Uppland, which is also considered to be her place of birth. After her mother’s death she and her sister were brought up by their aunt, Katarina Bengtsdotter. In 1316, when she was 13 years old, she married Ulf Gudmarsson, son of the Västergötland judge, who became magistrate of Närke in the late 1320s and Councillor of the Realm by the mid-1330s. They had eight children, including Katarina Ulfsdotter (Katarina of Vadstena). They lived at Ulvåsa farm in Östergötland. Both her background and her marriage brought Birgitta close to the political centre of power and enabled her to exercise significant influence through her religiously based authority even though she, as a woman, was excluded from holding official posts. She is described, for example, as a teacher, or tutor, of Queen Blanche of Namur, who came to Sweden in 1335, and she is said to have spent a lot of time at King Magnus Eriksson’s court.

Birgitta’s religion-centred world view was formed during her childhood and strengthened by close contact with learned theologians, mainly Mats Övedsson or master Mathias, chapter canon at Linköping cathedral and Birgitta’s main confessor, as well as the priest Hemming, later bishop of Åbo. Nils Hermansson, tutor of Birgitta’s children at Ulvåsa and later bishop of Linköping, was another of Birgitta’s teachers or mentors. The Cistercians at Alvastra monastery also played an important role in Birgitta’s spiritual development. Lacking formal school and university training, which at the time was not available to women, Birgitta nevertheless attained considerable and multifaceted knowledge, not least in the sphere of theology and law. Birgitta also gained deep insights into contemporary intellectual and cultural movements and she was well informed about the political circumstances of the time.

Birgitta went on pilgrimages, for example to Nidaros and to Santiago de Compostela with her husband Ulf in order to visit Saint James’ grave. The latter journey was begun in 1341. On return Ulf fell ill and died shortly after coming home to Sweden in 1344. He was buried in Alvastra monastery.

As a child, Birgitta began to have religious visions and these continued throughout her life. It was, however, when she was newly widowed that Birgitta heard her great religious calling. She began to receive visions and revelations, which led to her being viewed as a divine mouthpiece, or, as a “bride of Christ”. These apparitions and visions were treated sceptically and also doubted by Birgitta herself. She received support from and was persuaded about her divine duty by master Mathias; he and bishop Hemming collaborated to have her revelations theologically legitimized to her questioning surroundings.

In 1349 she went to Rome, which became her home until her death, apart from several trips to religiously significant places in Italy and a lengthy pilgrimage to the Holy Land via Naples and Cyprus. She was joined, amongst others, by two confessors, namely master Peter Olovsson from Skänninge and the prior Peter Olovsson from Alvastra monastery. After a year her daughter Katarina joined her. Two of her sons also spent various periods of time with her in Rome. From 1353 Birgitta’s household lived in a still extant house near today’s Piazza Farnese. Here she lived the life of an ascetic and through her religious authority gained significant influence. She had many contacts within the Roman aristocracy and was called “principessa de Nericia”, or princess of Närke as she was the widow of the judge, or “prince”, of Närke.

Birgitta experienced more than 600 epiphanies. They can be described as messages in the form of visions or voices, most of which were received from the Virgin Mary and Jesus Christ, sometimes even from God. Some of the revelations take the form of a conversation. At times the visions came from saints and dead people. In one of the apparitions Birgitta spoke to her dead husband, who was in purgatory. In another vision she spoke to the yet unborn child she was carrying. There are also apparitions where devils and demons appear. Birgitta transcribed, interpreted and explained these revelations in Swedish. Three of her hand-written notes have survived. Some of the visions were dictated to Peter Olovsson from Skänninge and Peter Olovsson from Alvastra, who in turn translated them into Latin. At her request the visions were later edited by Alfonso Pecha de Vadaterra (or Alfonso from Jaén). His edition of Revelaciones celestials from 1377, just a few years after Birgitta’s death, served as the basis for her canonization as a saint. This edition was divided into eight separate books, which comprise the majority of the apparitions. There are a number of other visions which were collected later and became known as Revelaciones extravagantes. Alfonso’s edition was disseminated across the Christian world in a huge number of imprints. Translations were made into different languages including old Swedish. Some of the surviving revelations in old Swedish served as the model for what was translated into Latin, but the majority are re-translations and date from the 1380s and later. The Swedish aristocracy, to which Birgitta belonged, were very interested in Birgitta’s works. In 1492 a printed edition of Revelaciones celestials was released in Lübeck, which was based on Alfonso’s text. It is difficult to establish just how Birgitta’s texts came about and several of the revelations are hard to date, but as a whole they are a complete, original and influential set of writings, which are characterised by extremely tangible imagery.

Birgitta’s visionary religiousness was based on God as a help to all people and was about the eternal fight between God and the devil within each individual. Her personal experiences as a woman and mother emerge in many of the revelations. Others are substantially more instructional and can be understood as a result of Birgitta’s outrage at the moral, social and political ills of the time. One of the subject areas was the ongoing dispute between the kings of France and England, namely the Hundred Years’ War, the devastating consequences of which Birgitta had experienced on her journey through France. Around 1346 she sent bishop Hemming and the prior Peter Olovsson to the pope in Avignon to prevail upon him to mediate between the kings, but they never received an audience. Another important aim of Birgitta’s was to re-establish the pope’s standing and to restore Christianity from its decline by re-establishing the pope’s seat in Rome. She advised King Mangus Eriksson on how to run his kingdom, admonishing him not to surround himself with bad advisors, not to impose unfair taxes, and to undertake a crusade in order to bring Christianity to the other side of the Baltic. Birgitta’s criticism of the king became increasingly harsh and in 1361 she sanctioned the possibility of deposing the king through revolt, supported by the national code of law. She urged Queen Blanka, along with the authorities in Naples and Cyprus, to pursue more pious and less frivolous lifestyles. She emphasized the obligations of various communities and called on the Swedish knights and aristocracy to improve themselves. She was also very harshly critical of worldliness and materialism among the priesthood as well as monks and nuns.

Birgitta had a great interest in those who lived in cloisters and the religious orders, particularly the Cistercians, but also the Dominicans and the Franciscans. Shortly after Ulf’s death she devised a canon for a new monastic order with detailed rules based on her visions. Her visionary ideal was that of a double monastery led by an abbess with 60 nuns and 13 priestmonks, four deacons and eight lay brothers. King Magnus Eriksson had plans to found a local monastery at the royal palace in Vadstena. In 1346 he and the queen made a significant donation to this future monastery. Birgitta seems to have managed to influence the king and her continued efforts to establish a new order became connected to Vadstena, which would become the first and most important house of her new order. Her monastic order, Ordo Sanctissimi Salvatores (The order of the Most Holy Saviour) was authorized by the pope in 1370. The Vadstena monastery was inaugurated in 1384, with the order already fully established.

Birgitta died in 1373 and the following year her remains were brought from Rome to the monastery at Vadstena. Shortly afterwards, efforts began to have her canonized, which occurred in 1391 and was authorized at the church council at Constance in 1415. She is celebrated on both 7 October (her sanctification day) and 23 July (her birthday). In 1999 Pope John Paul II declared Birgitta one of the patron saints of Europe. 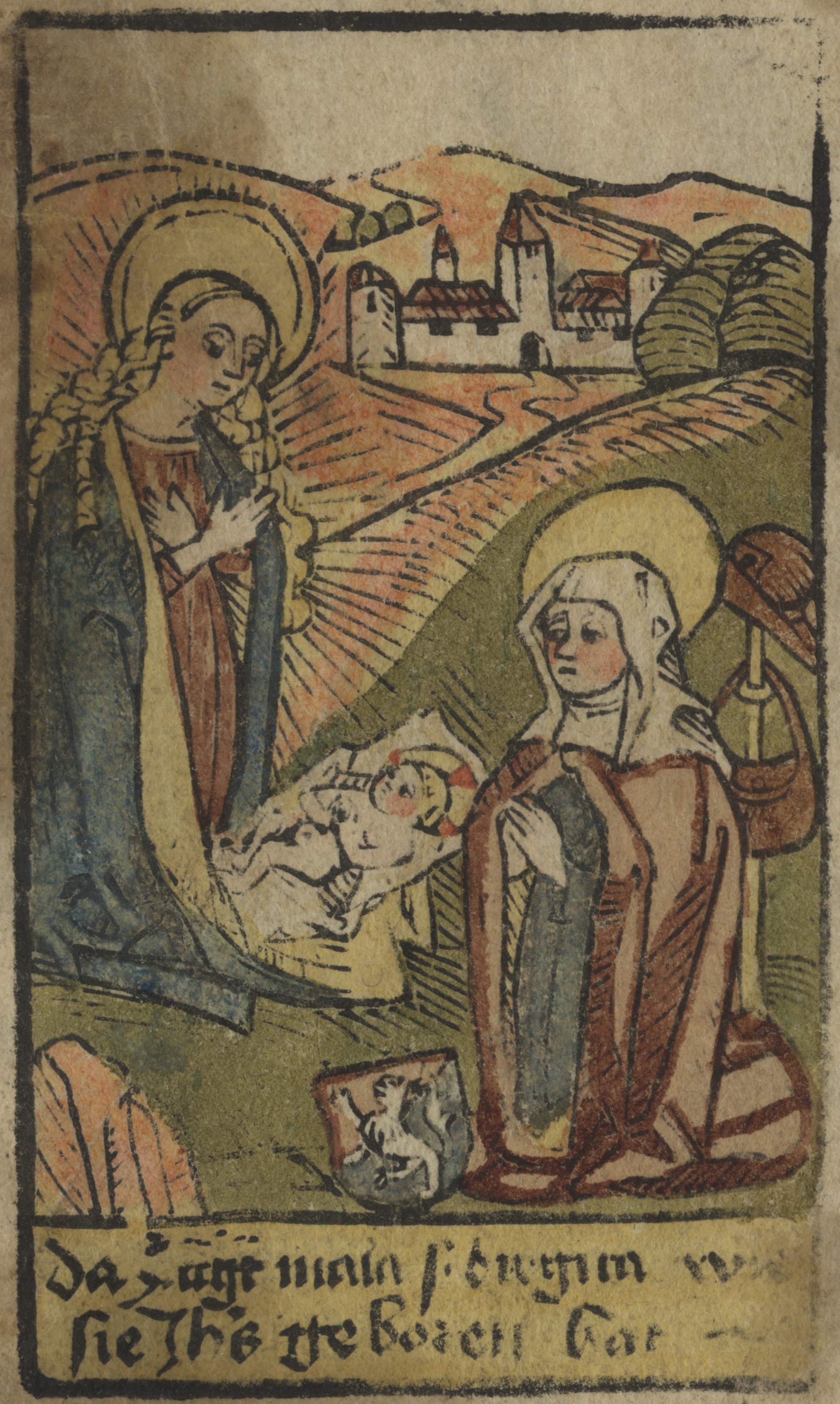