Brita Brilioth was a professional woman without a profession who created a career for herself, mainly in doing charity work. She was most prominent as archbishop’s wife, being the wife of Yngve Brilioth. Her mother Anna Söderblom had been in the same position a generation earlier.

Brita Brilioth was born on New Year’s Eve in 1896 in Paris, as Brita Söderblom, the daughter of the Swedish congregation’s young pastor Nathan Söderblom and his even younger wife Anna Söderblom. She was the next eldest of twelve siblings. The role of “big sister” would leave its mark on her life. Nordic cultural personalities and artists still at the beginning of their careers were frequent visitors to the family. Carl and Karin Larsson were among them, as was “Uncle Anders” Zorn and the sculptor Christian Eriksson.

After seven years in Paris, Nathan Söderblom was made professor at Uppsala University and also the vicar of the Helga Trefaldighets congregation with its vicarage at the small village of Stabby just north of Uppsala. More French-speaking than Swedish-speaking, Brita Brilioth and her siblings were brusquely uprooted from the world metropolis and settled in a red-painted cottage in the Swedish countryside.

The Lundellska school was situated half an hour’s walk away in town. Brita Brilioth shared a desk there with among others Bror Hjort. Her father held Monday soirées in Stabby for students. At these, new poetry was read aloud and songs and music were performed by artists who were sometimes famous, like Wilhelm Stenhammar and Emil Sjögren. This gave her a solid cultural grounding.

Their next move carried the family to the university city of Leipzig, a major cultural centre, where Nathan Söderblom was made guest professor. The rich musical life based on the Thomaskirche and the Gewandhaus concert hall made a deep impression on the teenaged Brita Brilioth. One of the last trains to be able to leave Germany in August 1914, at the outbreak of the first world war, carried the family back to Sweden and Uppsala, where their father was appointed archbishop.

Sweden may only have been a backwater in the world, but during Nathan Söderblom’s time as archbishop, the world came to the Archbishop’s home. Haile Selassie, Albert Schweizer, Rabindranath Tagore and the young Wilhelm Kemp were among the guests. The list can be made much longer with all the potentates and prelates who visited Nathan Söderblom within the framework of their ecumenical work.

Brita Brilioth would have liked to educate herself for a profession. She wanted to be a doctor. Despite the fact that Nathan Söderblom was an advocate of women’s right to vote, he did not however wish to listen to her. It was self-evident that her brothers were to carry on studying, and later even her little sister Yvonne was allowed to graduate from university. Brita Brilioth studied drawing and pattern design at the Technical college in Uppsala. She also did some training in healthcare and worked at the hospital in Uppsala in 1916. When the catastrophic Spanish influenza epidemic struck Sweden in 1918, she was a voluntary nursing aide. Not to be allowed to undertake academic studies was a great disappointment to Brita Brilioth, no doubt laying the foundations for her career in charity work and also for her lifelong endeavour to make the role of vicar’s wife into a recognised profession.

Young, gifted theologians flocked around Nathan Söderblom. One of them, Yngve Brilioth, a handsome but reserved vicar’s son from Tjust in the southern Swedish province of Småland, became the archbishop’s secretary. Yngve and Brita started taking long walks together. Their wedding took place in 1919, and they were to have six children.

After a brief period at Oxford and temporary homes in Uppsala, the young family ended up in Turku, Finland, where Yngve Brilioth had been appointed professor at Åbo Akademi in 1925. The children took up Brita Brilioth’s attention, but she also had time for lively socialising with her husband’s faculty colleagues and their families. She organised reading circles at which Strindberg’s and Ibsen’s dramas were read aloud. Music soirées were common and sometimes there were occasions for dressing up. After three years in Turku, in 1928, Yngve Brilioth was made professor at Lund University and Dean of Lund Cathedral.

Family life took a new turn. Their home was no longer a rented flat but newly built dean’s quarters in the magnificent Cathedral chapter building. Lively entertaining was now part of Brita Brilioth’s everyday life and she began to gain a public role outside the home. She was always “on the go” as her children recall. In Lund, she saw appalling poverty and started to take the initiative to collections and charity. Her own “career” was now under way.

In May 1931, the family’s fifth child was christened by Nathan Söderblom, but died soon after. Brita Brilioth took this very hard.

In 1938, the family moved to Östrabo, to the poet Esaias Tegnér’s great bishop’s residence on a hill outside the small diocesan and grammar school town of Växjö in southern Sweden. Extensive official hospitality now took over, with receptions, dinners and other events for which the bishop was expected to pay himself. There was no grant for entertaining. It was up to Brita Brilioth, as the overseer of cooks, maids and temporary staff, to see that everything worked out.

She acquired a prominent public role in both the city and the diocese. She worked single-mindedly to make women influential in the church, and when Växjö Diocese’s women’s council was founded in 1946, she was elected as its first chairwoman in close cooperation with the Dean’s wife Runa Ohlander from Ljuder as her enterprising secretary and executive member.

Brita Brilioth became more and more involved in organised charity work, not least the reception of refugees after the end of the war. Board and committee meetings were often held at the Residence with Ingrid Bergquist, the wife of the county governor, in the lead.

In 1950, the government appointed Yngve Brilioth as archbishop. The family now moved to Uppsala and the Archbishop’s Residence — where so much of Brita Brilioth’s youth had been spent. This involved balancing extensive entertaining against small resources, as had been the case earlier. She also had to plan for a large household and to be the overseer of the servants. One of the maids, Maj-Lis Cederlöf was for many years Brita Brilioth’s faithful support in the kitchen and household, and later also as the porter’s wife in the western wing.

Red Cross work was the core of Brita Brilioth’s own enterprise, from board and committees to bazaars, tombola and sales held in the Archbishop’s Residence. Brita Brilioth led her boards and committees with a firm hand; she had a pronounced gift for leadership and was not always merciful in opposition. However, people often had fun — to which her “Red Cross Ladies” bore witness — and things did get done. Brita Brilioth was the chairwoman of the Uppsala branch for almost thirty years, from 1952 to 1981. She was also a member of the central Red Cross Board in 1962—1974.

The Red Cross visiting service to prevent involuntary solitude was one of Brita Brilioth’s initiatives. Another issue close to her heart was the reunion of families split up as refugees from war and conflicts. In the Diocese’s women’s council, she took the initiative to starting the Women Students’ Advice Office for women students with problems. One annual assignment was the collection and distribution of the Christmas Fiver, as help to those in need. She was a member of the board of the St Katharina foundation, that under the energetic leadership of Margit Sahlin was the cooperative organ for the women’s councils in all the dioceses of the Swedish Church. Brita Brilioth had for a long time enthusiastically worked for women’s increased influence in the church, but she thought that women clergy were “unnecessary”.

Brita Brilioth had a large and lively social circle in the city of Uppsala and in castles and country estates in Uppland county. In Stockholm, she had a faithful circle of acquaintances among artists, musicians, singers and actors, in tune with her own artistic temperament. She also developed a productive network of contacts in finance and business, among whom she found donors for deserving projects. However, she only had really close friends in her own family – not least her younger brothers, whose big sister she remained all her life.

Yngve Brilioth retired in 1958 and died in 1959. Brita Brilioth had to leave the Archbishop’s Residence for a roomy flat in central Uppsala with a very suitable view of the Cathedral, the castle and the university library Carolina Rediviva. However, she retained part of her role of archbishop’s wife for a while longer, since her husband’s successor Gunnar Hultgren was a widower. When her official role was finally taken away from her, it was not entirely easy to accept.

Brita Brilioth intensified her voluntary work, now also for the handicapped in De Handikappades Riksförbund, currently DHR – Delaktighet, Handlingskraft, Rörelsefrihet (Participation, Drive, Liberty of action), in which she was active as the chairman of the Uppsala branch for eleven years and later as a member of the national board. She worked at the Folke Bernadotte home in Valsätra (currently the Folke Bernadotte regional habilitation centre), a Red Cross initiative for the rehabilitation of children with disabilities. She was also active in the European mission Inomeuropeisk Mission, IM, currently Individuell Människohjälp (Individual Human Help).

Even at an advanced age, Brita Brilioth led journeys to Paris and Salzburg for groups of disabled people. She was a diligent lecturer in churches and parish halls. Two themes on which she regularly lectured were “Nathan Söderblom and music”, sometimes with musical illustrations by her son Helge; and “Elsa Brändström – the angel of Siberia”. 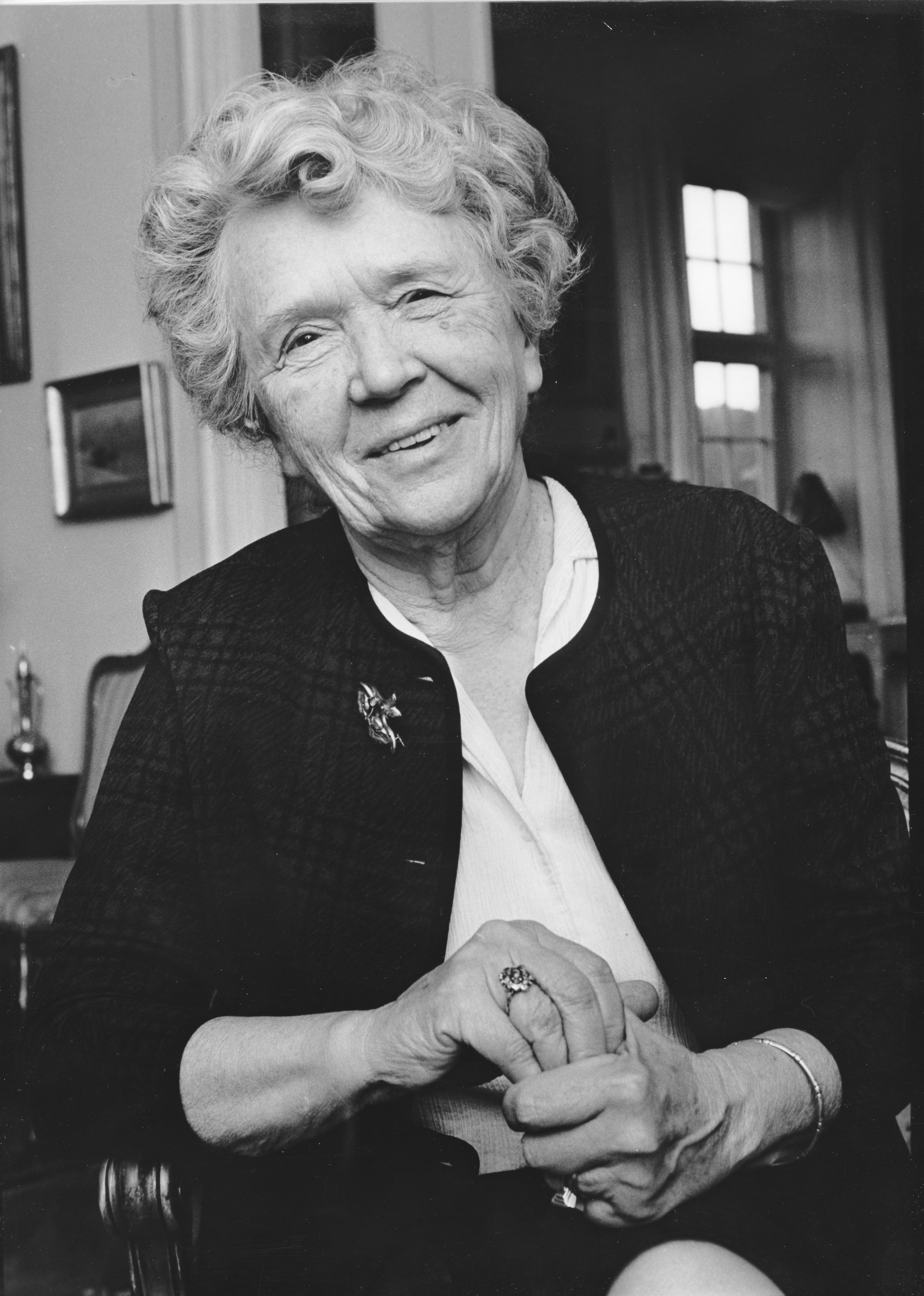