Britta Gröndahl was a translator, a journalist, an author and a political activist within the Syndicalist movement in Sweden.

Britta Gröndahl was born in 1914. She was the daughter of Hans Maartman, treasurer and city council representative for the right-wing party, and his wife Dagmar, who came from an agricultural working background. Her parents clearly led a bourgeois lifestyle and of a certain status, to a degree that they, nevertheless, found hard to sustain. This generated conflicts in the family and made Britta Gröndahl aware of the nature of class society.

Britta Gröndahl spent her childhood in Skogstorp, in the Eskilstuna area. In 1931 she was one of that small minority of girls who gained her school-leaving certificate in the Latin section of Eskilstuna Högre Almänna Läroverk (advanced general school). It was during this time that she met Gustav Gröndahl, a professional musician who was seven years her senior, and whom she later married. They settled in Stockholm and she began to study languages at university level – this was a choice deemed appropriate for her gender, despite her recently developed interest in politics inclining her towards political science. She adopted the then dominant ideals of family life and during the 1940s she became the main responsible adult for her home and the three daughters she bore. She was nevertheless able to hold down a job and pursue studies on the side, and in 1945 she released her first translation, which was of the novel The Anointed (Resa mot svart ocean), by Clyde Brion Davis. This was rapidly followed by several other works, of which the majority were translations from Dutch and English. In 1953 she gained her licentiate in literature.

Once her children were old enough she decided to further develop her political activities and found a receptive sphere at the Arbetaren newspaper and in Sveriges Arbetares Centralorganisation (SAC) (Swedish workers’ central organisation – the syndicalists). The German syndicalist Helmut Rüdiger became her special mentor due to his great knowledge of and many important connections within international syndicalism. Britta Gröndahl took an interest in Spanish and French syndicalism and in 1959 she wrote a book on Pierre-Joseph Proudhon.

During the first half of the 1960s Britta Gröndahl gained experience of and studied libertarian movements in Spain and France and in 1965 she became the first international secretary of the SAC. The 1968 student revolutions and the general strike in Paris came to have a lasting impact on her. She adopted a more radical route than many of her colleagues in SAC and it was not long before she gave up her position on Arbetaren and resigned from her role as international secretary. Her activism became channelled in the direction of the new anarchist youth movement, including as co-creator of and colleague at a bookshop café at Bellmansgatan 12 in Stockholm. She was also involved in Frihetlig socialistisk tidskrift.

Britta Gröndahl published her memoires, entitled Äventyrens år, in 1994. She died in 2002 and is buried at Bromma cemetery. 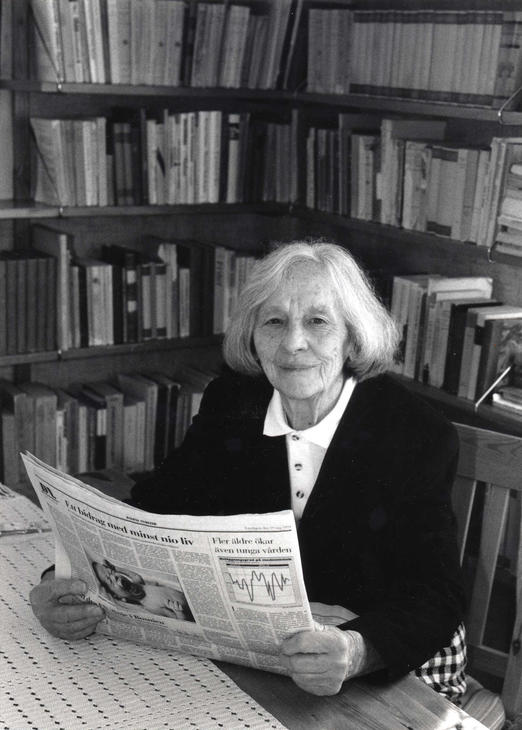