Carin Boalt was the first female professor to work at a technical college. Her research and her role in public education were of great significance to the public perspectives on domestic work and homes.

Carin Boalt was born at Molstaberg estate in Södertälje municipality in 1912. She and her elder sister Brita Åkerman studied at Stockholm College during the 1930s. Carin Boalt married Gunnar Boalt, a professor of sociology. Together they had five children. They separated in 1957.

Carin Boalt’s initially focused her research on issues of nutrition and diet. During the crisis period of the 1930s knowledge of the importance of a healthy diet was generally poor and this issue became central to the work ongoing at Statens institute för folkhälsan (state institute for public health), where Carin Boalt worked for several years.

Diet and housekeeping habits were closely related to the developments in house building. Crowding and inadequate provisions for food preparation was a reality shared by many. As one of the founders and managers of Hemmens Forskningsinstitut, established in 1944 and later known as Konsumentinstitutet, Carin Boalt undertook systematic investigations into the functional aspects of the home environment. Women’s and children’s needs were prioritised within this research. The scientifically tested knowledge which was established through the work of Hemmens Forskningsinstitut put Swedish consumer research onto a world footing. It also formed a part of the housing sociology, which became prominent in the post-war social planning and welfare policies.

Carin Boalt became professor of functional design studies at the newly instituted college of technology in Lund. She was responsible for ensuring that future architects would be educated as to the various functional needs required of domestic homes. Owe Åhlund’s tribute to Carin Boalt summarised her scientific approach as one focused on the users and the future. Functional design studies were an interdisciplinary subject in which Carin Boalt sought to provide a unified perspective.

In addition to her professorship Carin Boalt also performed a range of other duties and she remained active in social matters even after retirement. She was engaged in aid projects for several decades, including a role with SIDA (Swedish International Development Cooperation Agency) in Tanzania. Another one of her projects involved handicapped youth in Sri Lanka.

Carin Boalt’s research and activities concerned matters which were important to the wider public but she also defended the importance of skills and research. In 1990 she set up Forum för kunskapsvård och forskningsinformation for which she served as the first chair.

Carin Boalt was a research pioneer who also played a role in promoting Swedish welfare policies.

Carin Boalt died in Stockholm in 1999. 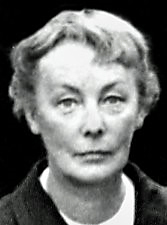