Caroline von Knorring was born in Gothenburg in 1841. She was the daughter of Major and Baron Gustaf Isak von Knorring. Her father was a member of the Swedish noble von Knorring family which had been introduced to the House of Nobility in 1756. However, due to her father’s failing finances it was left to Caroline von Knorring to find a way to earn a living. Women gained the same right as men to enter trades on the abolishment of the guild system in Sweden in 1846. Further, the 1864 trade decree entailed that complete freedom of trade was introduced and women were now allowed to enter new professions. Caroline von Knorring opted to work as a photographer. Several of the earliest female photographers belonged to the bourgeois class and some were even members of the Swedish nobility. Photography was seen as a respectable occupation and women were able to establish themselves as photographers and earn a living.

Caroline von Knorring travelled to Stockholm where, in 1864, she opened a photography studio at Regeringsgatan 59, entered from Jakobsbergsgatan 21 just at the corner of Regeringsgatan. By 1865 Caroline von Knorring had two photographic assistants in her studio and two further female staff in her home. She took both portrait pictures and stereoscopic photographs. She also frequently used her camera to document ongoing construction work in Stockholm. She created two portfolios, one entitled Stockholm och dess omgifvningar and the other called Vyer af Kungliga Djurgården. These also contain ten views of Stockholm taken from Mosebacke, Gustaf Adolfs torg (square), Norrbro, and Slussen. Caroline von Knorring displayed her photographs at the 1866 Konst- och Industriutställningen (art and industrial art exhibition) held in Stockholm. She was a member of Deutscher Photographen-Verein in Berlin. She was active as a professional photographer in Stockholm from 1864 to 1872.

In 1872 Caroline von Knorring married Ehrenfried Roth, an ironworks owner and parliamentarian. After marrying she closed her photography studio in Stockholm and moved to Sunnansjö manor in Grangärde parish. From 1872 to 1900 she took pictures of Dalarna landscapes, the local environment and Västerbergslagen ironworks. Her husband died in 1905 and at that point she moved to Ludvika manor, another property in the family. Sunnansjö manor then came to serve as a summer house. Caroline von Knorring ran the manor until her daughter took over the property in 1912. At that time Caroline von Knorring moved back to Stockholm.

Proof of Caroline von Knorring’s well-composed Stockholm photographs can be seen at Stockholm stadsmuseum (city museum). In addition to the calling-card pictures of herself and of her family – some of which are coloured – her photograph album is unique in that it includes a music-box which begins to play as soon as you open it. It also contains a beautiful photograph of Caroline von Knorring standing, dressed in crinoline, beside her large wooden studio camera. 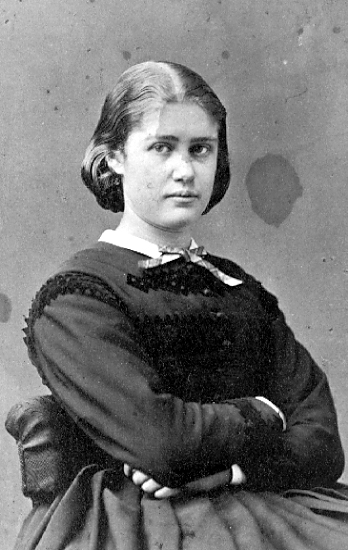