Carolina Wilhelmina Stålberg was one of the most versatile, productive, and popular authors of the 1800s. She wrote and translated a great number of works and she took an active part in the social debates of the day.

Wilhelmina Stålberg initially wrote poetry which she published in the daily press, including in Allmänna Journalen and in Stockholms-Posten. Her first two collections of poems, Min lyras första toner and Min ungdoms idealer were already published during the 1820s. Wilhelmina Stålberg also wrote prose. Her subject matter reflected a wide range of interests. Wilhelmina Stålberg gained particular fame and popularity for her historical novels. Her characters included the medieval queen Filippa and Katarina Månsdotter, who lived in the 1500s, but she primarily wrote about famous figures from the 1600s and 1700s, such as Queen Kristina and Hedvig Charlotta Nordenflycht. In addition to producing her own fiction, Wilhelmina Stålberg also worked as an editor for various journals.

In 1839 C J L Almqvist published a story, called Det går an: En tafla ur lifvet, about Sara Videbeck and Albert who fall in love on a steamboat journey across lake Mälaren. This book engendered vociferous discussion and Wilhelmina Stålberg was one of those who directed criticism towards Almqvist’s vision of the cohabiting lifestyle. Using the byline of Faster Karin and with the help of Sara Videbeck’s fictional daughter in her 1849 novel Eva Widebeck, eller Det går aldrig an: En arabesk ur lifvet Wilhelmina Stålberg asserted that free love was not a solution which favoured women. In fact it was, indeed, just a dream desire of men. In reality – if Wilhelmina Stålberg is to be believed – women were best served in life if they were able to be free and unmarried.

Wilhelmina Stålberg’s output as both a writer and a translator were aimed at the general populace. This was particularly true of the ballad of Hjalmar and Hulda, “På blomsterklädd kulle satt Hjalmar och qwad”. It was first published in Wilhelmina Stålberg’s 1939 novel entitled Emmas hjerta although it did not became a major hit until the 1860s. At that point it was printed as a broadside and through its 50 or so editions it became available throughout Sweden, as well as in Norway and Denmark where songs about Hjalmar and Hulda could be heard. Stefan Johansson’s biography of Wilhelmina Stålberg for Svenskt biografiskt lexikon reveals that if one only counted the Swedish editions alone they would account for nearly a quarter of a million prints.

Despite her popularity Wilhelmina Stålberg was not particularly highly esteemed by contemporary literary critics. Stefan Johansson’s article notes that she was considered overly moralistic and that her books were viewed as typical of poor literature – if one excludes certain translations. However, with regard to the emergence of Svenskt kvinnobiografiskt lexikon Wilhelmina Stålberg – along with P G Berg – provided important preliminary work in Anteckningar om svenska qvinnor, published from 1864–1866. Although this work does include a number of fictional characters and the information contained within is not always reliable, nevertheless both this early publication and the present online dictionary share the intention of making women’s contributions to history visible.

Wilhelmina Stålberg spent her final years in Mariefred, where she died in 1872 following a period of illness. Her body was subsequently buried in St Johannes cemetery in Stockholm. 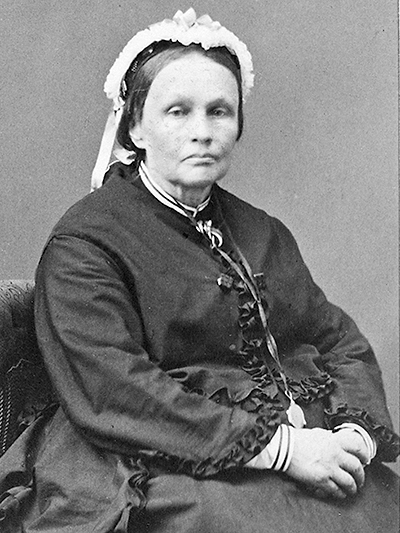