Cecilia Anderson was a pioneer woman entomologist and traveller. She probably counts as the first woman in Sweden to be an active insect collector on a global level with her own collection of scientifically labelled insects.

Cecilia Anderson was born Cecilia Andersdotter in Brunnby in Skåne in 1855. Her mother was Sissa Olsdotter and her father was Anders Larsson. She had one sister, Olina. The family lived on Fjällatorp estate where Anders, as the previous owner, owned the right to live for the rest of his life. Cecilia Olsdotter attended Brunnby elementary school from 1864.

When she was 17 years old, Cecilia Anderson emigrated to America, leaving Sweden on 25 April 1873. She travelled alone and is registered as an unmarried maidservant. It is not established how she first met her husband-to-be John Frans Anderson from Jämshög in Blekinge. He was in the USA to build bridges. He was also of very humble birth and had worked his way up as a successful engineer in what was known as the country of opportunity. Their wedding took place in New York on her twenty-fifth birthday in 1880.

During the 1880s, the couple travelled around in the USA to wherever bridges were to be built, and also made longer journeys, to Australia among other places. From 1891, they were active in Cuba, where a great amount of construction work was to be carried out on account of the large-scale mining enterprise that was started. During all these travels, the couple collected natural and ethnographic objects, and Cecilia Anderson focused especially on collecting insects. The couple seems to have travelled round the whole world, and among the collections they left are objects from Japan, Sri Lanka, Venezuela, China, Congo, Egypt and Morocco. However, in some cases they were collections from trips made by John Frans Anderson before his marriage. In 1897 or 1898, they moved back to Sweden, now a wealthy couple, and settled at Djursholm in Stockholm.

At the end of the 1800s, there are many examples of women who undertook independent enterprises while they travelled around accompanying men with diplomatic or commercial assignments. Among these, Cecilia Anderson is one of a minority from obviously humble origins. From being a maidservant to becoming a global insect collector may be considered a unique path in life.

The house that the couple had built in Djursholm also has a special fortress-like architecture and is still called Cuba-Anderson’s villa. During her time in Stockholm, Cecilia Anderson was repeatedly a guest at the National Natural History Museum’s entomological section, where she got to know Professor Christopher Aurivillius and later also Signe Ramberg, the country’s first professional woman entomologist and a preparator. In 1906, Cecilia Anderson was elected a member of the Entomological Society in Stockholm.

The same year, 1906, the couple moved to Båstad, where they had yet another, even more spectacular house built, called Buena Vista, a fifty-two-room villa inspired by Cuban haciendas. From Båstad, Cecilia Anderson sent insects on several occasions to the National Natural History Museum. In 1915, John Frans, now John Francis Anderson, was appointed as the USA’s general consul in Copenhagen, and the couple moved to Denmark. In connection with their move from Sweden, they got rid of most of their great collections of natural and ethnographic objects. These were partly donated and partly sold at auctions and ended up in many different places, for example in the Swedish Museum of Natural History (the etnographical collections are currently in the Ethnographic Museum in Stockholm), Kulturen in Lund, Malmö museum (currently Malmö museer) and Kristiandstad museum (currently Regionmuseet Kristianstad). It seems to have been in this context that Cecilia Anderson’s insect collection ended up in Helsingborg Museum. However, she also kept one insect collection and continued to expand it, and it may be this that can now be viewed in the Biological Museum in Lund. She is also said to have had a large collection of molluscs, but it is uncertain where that has gone.

After a few years in Denmark, the couple retired and moved to San Diego in California in 1916. Cecilia Anderson was described as being very charming and social in a typically American way. She was known for her collecting and her wide social circle where they were living. The San Diego natural history museum is also said to have received some of the couple’s collections.

Cecilia Anderson died at her home in San Diego in 1919 and lies buried in Greenwood Memorial Park. 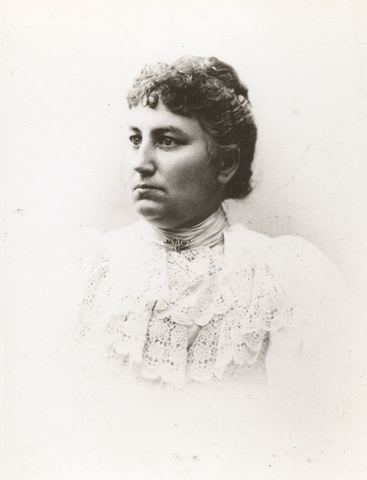