Charlotte Mannheimer was an artist who was also a patron of the arts. Her role as patron had a major influence on the artistic life of Gothenburg during the 1910s and 1920s.

Charlotte Mannheimer’s parents were the Danish wholesaler Arnold Abrahamson and his Dutch wife Flora de Jongh, who were both of Jewish heritage. Charlotte Mannheimer was the second oldest of six siblings and was born in London in 1866. She began to study painting when she was 16-years old at the South Kensington School of Art. In 1884 the family moved to Copenhagen where Charlotte Mannheimer continued her studies with a variety of artists until 1888 when she began studying with Viggo Johansen at Det Konglige Danske Kunstakademi. Charlotte Mannheimer moved to Gothenburg following her marriage to the lawyer and liberal politician Otto Mannheimer in 1893.

Charlotte Mannheimer was firmly determined to carry on with her painting despite being married. She enrolled at the Göteborgs Musei rit- och målarskola (drawing and painting school; later Konsthögskolan Valand). However, given that she had five children between 1894 and 1904 she was only able to attend classes sporadically. Her family duties took precedence and, despite having access to a studio she barely had time for her painting.

In 1901 the Mannheimer couple – along with other Gothenburg families who shared their pedagogic and cultural proclivities – set up a reform school for boys and girls called Göteborgs Högre Samskola (advanced coeducational school), which was one of the first secular schools in Sweden. The school devoted a lot of time towards music, theatre, and drawing, at which Charlotte Mannheimer would sometimes provide relief teaching for drawing classes. In 1920 she put on a production of her fairy-tale “Den vise mannen och prinsessan”. In order to bridge any potential discrepancies arising between the school and the students’ homes Charlotte Mannheimer would invite parents and teachers in for discussions about child rearing and to listen to visiting authors, such as Ellen Key and Fridtjuv Berg, an educator and politician.

From 1918 to 1925 Charlotte Mannheimer ran the art gallery called Ny konst. She served as deputy chair of Göteborgs Konstförening (art association) from 1917 and during the 1920s she was on both its working committee and purchasing authority and championed the acquisition of young contemporary artworks for the art lottery. Charlotte Mannheimer was able to influence which art was displayed in Gothenburg both through her own gallery and through the Göteborgs Konstförening exhibition premises, which initially lay at Valandhuset and then, from 1923 onwards, in the Konsthall. It was through her efforts that the collections of Gothenburg Museum of Art were expanded through the acquisition of new artworks. In 1918 and 1919 the museum received extra funds to acquire art from young artists through donations received from her parents-in-law Theodor and Hanne Mannheimer’s fund. Acquisitions were made through a specific agency which Charlotte Mannheimer belonged to along with the museum director Axel Romdahl and the artist Birger Simonsson. Charlotte Mannheimer’s economic generosity and strong interest in contemporary art inspired several artists to settle for longer or shorter periods in Gothenburg. The Mannheimers’ home at Föreningsgatan 8 was always available to supporters of the new avant garde.

Although Charlotte Mannheimer was a talented colourist she felt isolated as an artist until she met artists who were 20 years her junior and who later came to be known as the first generation of Gothenburg colourists. Gösta Sandels, Sigfrid Ullman and Birger Simonsson were jokingly called “Charlotte’s boys”. They appreciated Charlotte Mannheimer’s art and she quickly gained an appreciation of their new modern art in return. Encouraged by her younger colleagues she travelled with some of them to Paris in 1909 and spent a short time studying at Matisse’s painting school. Her painting style did not change as a result of this.

An early fan of Charlotte Mannheimer’s work was the artist Richard Berg and he had ensured that in 1894 she was elected onto the important Konstnärsförbundet (artists’ association), under whose direction she made her debut that same year. Her first solo exhibition was held in 1913 through the Valandhuset konstförening (art society). The museum director was not generous in his appraisal of her work in the Göteborgs Handels- och Sjöfarts-Tidning newspaper, whilst the Göteborgs-Posten reviewer Birger Baeckström wrote that Charlotte Mannheimer had a sure feeling for both composition and form and a captivating colour scheme. He complimented her with his statement that she was “the best female artist in the country”.

The following year Charlotte Mannheimer, along with Birger Simonsson, Gösta Sandels, and Sigfrid Ullman, held an exhibition at the Sveriges allmänna konstförening (general art society of Sweden) premises. In 1921 she participated in the Föreningen svenska konstnärinnor (Swedish female artists’ society) exhibition at the Liljevalchs art gallery in Stockholm along with the likes of Siri Derkert, Sigrid Hjertén, and Vera Nilsson, as well has her daughter Agnes Heiberg and her sister Florence Abrahamson who were also artists. Her paintings were displayed within a dedicated single room in the retrospective section of the large exhibition at Gothenburg art museum, held in 1923 to mark the 300 year jubilee celebrations of Gothenburg’s founding. In 1933 she exhibited at the Norwegian Kunstnerforbundet in Oslo.

Charlotte Mannheimer largely painted portraits and interiors, as well as a number of garden views. Her children served as models in several of the paintings. She also made several portraits of friends and family. One of these was a light-coloured portrait of the coeducational school principal, Sven Lönborg, clad in blue. This was a much-acclaimed painting at the time and a later reviewer noted that it was reminiscent of the French impressionist Auguste Renoir. The Mannheimer couple owned Renoir’s painting Garden (Trädgård in Swedish) which their heirs donated to Gothenburg art museum in 1935. Stylistically speaking Charlotte Mannheimer’s paintings lay close to intimate Danish realism, albeit with impressionist influences.

The 1935 memorial exhibition at Gothenburg art gallery was held jointly for Charlotte Mannheimer and her daughter Agnes Heiberg. 15 years later another memorial exhibition of 42 paintings was held at Konstnärshuset in Stockholm. At this one she was called a “Swedish Berthe Morisot”, in reference to the female French impressionist. Charlotte Mannheimer did not produce a massive amount of paintings but she was appreciated for her picturesque and colourist qualities. Gotthard Johansson, a reviewer for Svenska Dagbladet, believed that these qualities justified her a place within Swedish art history as more than just a patron but as an artist in her own right. 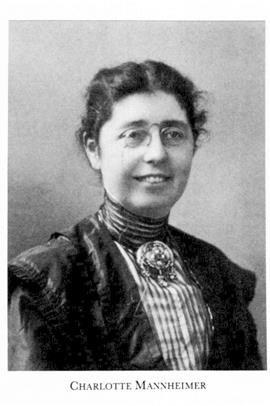