Christina Charlotta Hjärne was a church donor and one of the most important individuals within the early Herrnhut (Moravian) movement in Stockholm. She wrote an autobiography and kept a diary during the period of 1744–1803.

Christina Charlotta Hjärne was born in 1722. She was born to Olof Rudbeck the younger when he was in his third marriage. She was her mother’s – Charlotta Rotenburg's – first child, but Olof Rudbeck’s 20th child. It was said that she was her father’s favourite, and she has been described as an intelligent child who was keen to learn, as well as spoiled and given to perfectionism. Although she did not want to marry, she was forced to accept a proposal from Erland Hjärne, of the mining board, who was the son of the then well-known Urban Hjärne. Erland Hjärne was 39 years old at that time. Christina Charlotta was 23. Erland Hjärne, apart from being on the mining board, was also a poet and wrote hymns for the Herrnhut hymnal Sions Nya Sånger.

Christina Charlotta Hjärne’s unwillingness to marry was possibly related to a mortal fear she had. She understood that childbirth could be fatal and her account in her diary of her own pregnancy and first experience of childbirth in 1747 is heavily marked by this fear. However, the son born of this occasion, Urban Olof Hjärne (the Hjärne couple’s only surviving child), became a problem child.

In Christina Charlotta Hjärne’s autobiography and diary readers are presented with a woman who intensely and with great detail depicts and studies her inner self whilst also describing the people around her and her daily life. These portrayals are combined with descriptions of her inner religious experiences. These entail experiencing a judgemental voice, clearly related to her father, Olof Rudbeck, which drives her to examine her inner self. Her worries about her son and her fears that she had failed in bringing him up pushed Christina Charlotta Hjärne towards the Herrnhut movement through which she was able to free herself from her strong feelings of guilt. The focal point of Herrnhut piety was (and still is) the unconditional grace of belief in Christ.

Christina Charlotta Hjärne’s diary and autobiography are illustrative of a Christian tradition in which women were also allowed the right to express their Godly feelings by writing about their inner selves, their lives, and their activities. This religious parity – which was sometimes very narrowly defined – was unusually extensive within the Herrnhut movement. The fundamental reason for this was that the founder of the movement, Nikolaus Ludwig von Zinzendorf, believed that only like could influence like. Herrnhut women therefore should and ought to teach, preach, and evangelize. They were even allowed to perform priestly duties such as baptism and to supply the Eucharist.

Christina Charlotta Hjärne’s son, Urban Olof Hjärne, returned from his European adventures in 1767, but died in 1769 already, aged only 22. His mother, now childless, also became a widow in 1773. For the remainder of her life she provided premises where her local congregation could hold their services and run a school for less well-off girls. She willed her large property at Kungsträdgården in Stockholm – where she had had a large building including a church hall built – to the Herrnhut congregation in 1783.

Christina Charlotta Hjärne died in 1804. Her autobiography, which she probably wrote during her final years, was read at her funeral – in Herrnhut tradition – and delivered as a kind of sermon or a type of lesson for the congregation. 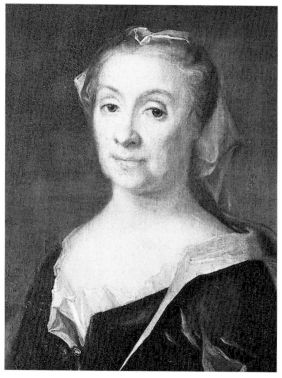