Barbro Svinhufvud was an author, a teacher, a programme director and host. She was active during Swedish Radio’s earliest years, from the 1930s–1950s. She also held key positions within Swedish Television when it was being set up in the 1950s and 1960s.

Barbro Svinhufvud was born in Stockholm in 1909. She was the daughter of Edward Adams-Ray, a language teacher, and Dagmar Sandberg. In 1938 Barbro Svinhufvud married Torkil Svinhufvud, an insurance director. They had four children, born during the 1940–1945 period.

After gaining her Master of Philosophy at Stockholm college (now Stockholm university) in 1937, where she had served as chair of the female students’ association Stockholms Kvinnliga Studentkårsförening, Barbro Svinhufvud then spent some time working as a teacher whilst also working with Radiotjänst (now known as Sveriges Radio). One of her colleagues was Sven Jerring, nicknamed “Uncle Sven”, the instigator of the Barnens brevlåda children’s programme, for whom she worked on a freelance basis as an assistant. It was not long before she largely became responsible for children’s programmes and she was keen to see these programmes recognised in their own right within the broadcasting service. She gained a fulltime position at Radiotjänst in 1941 and in 1953 she was made head of children’s programming, the first woman to be appointed as head of a programme. Prior to that there had been no women amongst the permanent staff. In 1943 Barbro Svinhufvud set up Radions Kvinnliga Tjänstemannaförening (female radio-workers’ association). During the 1960s she transferred to Sveriges Television (SVT) where she worked as head of planning from 1961–1963 and as head of international services from 1964–1969. She then returned to Sveriges Radio where, from 1969–1970, she was the director of international radio programming.

Barbro Svinhufvud appeared on the radio for the first time in 1935 when she sang children’s songs written by Alice Tegnér. She believed that these songs were “best suited to Swedish children”. At that time she went under the name of “Tant Barbro” (Aunt Barbro) in her public engagements, to complement “Uncle Sven”. Throughout the 1930s and 1940s Barbro Svinhufvud appeared on various children’s song programmes aimed at the youngest listeners. She also produced various programmes in which fairy tales, stories, classic folk-tales as well as newly-written stories were read out, sometimes even in her own voice. During the 1930s children’s radio programmes became subject to criticism from Svenska Kvinnoföreningars radiokommitté (Swedish women’s associations’ radio committee) who felt that the programming should be more educational with obvious goals following national guidelines. Specific programmes should be produced to suit selected target groups and the programmes should contain clear activity-based and pedagogical aspects. Barbro Svinhufvud obviously took these comments on board. She broadened the repertoire of children’s programmes and emphasised the importance of engaging children and youth themselves in order to find out what they wanted from the radio and created new types of programmes. For example, she interviewed children and youth on air and produced documentary programmes for children. Barbro Svinhufvud sought to modernise approaches to children’s programming so that it no longer solely comprised morality tales and stories which were then didactically presented to the public. She shared Svenska Kvinnoföreningars radiokommitté’s doubts about the radio “sagotanter” (traditional female storytellers). In an interview she gave to the Radiolyssnaren journal in 1935 she pondered whether “modern children even appreciate them anymore”. Here Barbro Svinhufvud is referencing “modern children” who had moved away from old-fashioned fairy tales and she believed that more “realistic tales and songs could rouse their imagination and their interest in the things they encountered on a daily basis”. Children’s natural curiosity was emphasised, which radio could help to satisfy. Barbro Svinhufvud therefore also developed pedagogical programmes which contained puzzles and other activities for children of various ages as well as programmes with guessing competitions and intellectual puzzles. The range of programmes on offer during Barbro Svinhufvud’s time as head of programming became more comprehensive and more varied.

During the time of the Second World War Radiotjänst considered how to better engage with their younger listeners. Some believed that children should be spared from knowledge of global events. Barbro Svinhufvud believed, however, that children needed to be informed of developments and wanted to address the younger listeners directly – but she faced disagreement from her line managers on this.

Following the end of the Second World War radio services began to take a more light-hearted approach to programming. Barbro Svinhufvud was influential in this change, believing that children should both be entertained and motivated by radio programmes – albeit not by the teacher’s rod, but by offering them a good choice of programmes, such as guiding them in their choice of reading material whilst also encouraging their interests and hobbies. Children’s programmes also benefited from organisational improvements and fixed scheduling and airing times.

As television began to emerge during the mid–1950s, Barbro Svinhufvud was recruited to produce a family-friendly televised version of a previously popular radio programme called Snurran. Barbro Svinhufvud also featured amongst the pioneer television hosts of children’s and youth shows. She also provided advice and hints for parents, published in trade publications, on how to manage the time children spent watching TV as there were fears that too much exposure could have a damaging effect on the young.

After a few years focusing on establishing children’s and youth programming on television Barbro Svinhufvud then took on various administrative managerial posts. This included serving as head of planning for SVT.

Barbro Svinhufvud died in 1991. She has left an archive of her personal papers, including letters, manuscripts, press cuttings, and family notes as well as notes on her time working at Sveriges Radio. 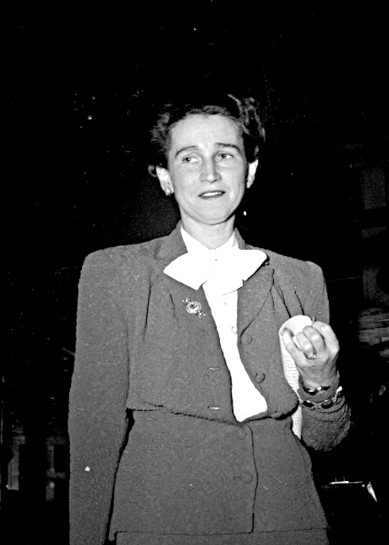