Queen of Denmark, Norway and Sweden

Dorothea of Brandenburg was Queen of Denmark, Sweden and Norway during the 1400s.

Dorothea was probably born around 1430 as the youngest daughter of the Margrave Hans (Johan) of Brandenburg and Barbara, daughter of the Elector Rudolf III of Sachsen. Dorothea’s father was really the heir to the title of Margrave, but gave it up in favour of his younger brother and moved with his family to the principality of Bayreuth, in present-day Bavaria in Germany, in 1438. Dorothea would then have been about eight years of age. Bordering on Bayreuth was Oberpfalz, governed by Count Johan, whose son Kristofer had been appointed as King of Denmark in 1440. According to the very tendentious Karl’s Chronicle, Kristofer was looking for a suitable bride and came to hear that the Margrave of Brandenburg’s daughter was “The loveliest a man could see”.

Since Kristofer was Dorothea’s second cousin, papal dispensation was sought and granted for the marriage. The motivation given was that the Nordic kingdoms were afflicted by false beliefs. The Kalmar Union was threatening to break apart and King Kristofer was the only contender able to claim the position of King of the Union on account of his blood ties. Dorothea’s marriage to King Kristofer would thus further strengthen the Union.

According to the Karl’s Chronicle, Dorothea was 14 years of age when she became King Kristofer’s wife in September 1445 in Copenhagen. It is said to have been the most lavish wedding ever in the Nordic countries. And on 14 September 1445, young Dorothea was crowned Queen of Denmark, Sweden and Norway.

The ambition to present Dorothea as the legitimate Queen of the Union was obvious. Members of the noble families of the three countries were invited to the wedding. All the Danish bishops as well as the bishops of Oslo and Strängnäs assisted at the coronation. Dorothea was also granted a life or widow’s pension from all three kingdoms. It included Örebro Castle and the provinces of Närke and Värmland in Sweden, and the town of Roskilde in Denmark.

After the coronation, the royal couple travelled around in their kingdoms, landing in Sweden at the end of 1446, where they visited the Convent at Vadstena among other places. At the beginning of the year, Dorothea and her husband arrived in Stockholm. The visit is described in the Karl’s Chronicle that in itself is actually a political document in favour of Karl Knutsson Bonde. At the time of Dorothea’s visit, Karl was the Marsk – the military commander-in-chief – in Sweden. According to Karl's Chronicle, they met in Stockholm where the Queen “often invited the Marsk to her table”. She is said to have had nothing but good to say about him.

The marriage to Kristofer was brief and childless, since he died in January 1448, probably no older than 30 years of age. Dorothea, his young widow, was probably in her late teens, and she continued to reign in Denmark with the help of the Royal Council until a new King could be elected. In October 1449, Dorothea remarried, this time Kristian of Oldenburg who was crowned King Kristian I of Denmark a few days later.

The years that followed were characterised by the Nordic Union’s instability and the struggle for power mainly between Dorothea’s husband and Karl Knutsson Bonde, who had been elected King of Sweden. In 1451, 24 delegates convened, twelve from Denmark and twelve from Sweden, in the small Danish border town of Avaskär in northeastern Blekinge, nowadays a province in Sweden. The aim was to agree on an order of succession. Top of the Danish list was the demand that Queen Dorothea should be given access to her life or widow’s pension, withheld from her by King Karl. The negotiations stranded however and war broke out, but Dorothea did not give up her demands.

In the chronicle Danmarckis Rigis Krønicke there is a description of how Dorothea sent her procurator to insist on her rights before the council. She asserted that Karl Knutsson Bonde knew very well that the life pension was hers and that he had broken his oath by refusing to hand over her property. In 1457, Karl was dismissed and driven out of the kingdom. The same year, Kristian was acclaimed as also the King of Sweden, and Dorothea was able to return with him to Stockholm. In May the following year, King Kristofer’s dowry to Dorothea was handed over with “the council’s counsel” and in the presence of a great number of prelates and privileged classes.

The dispute concerning Dorothea’s life or widow’s pension was not thereby over. Dissatisfaction was brewing in Sweden, and in the coming years armed conflict broke out against antagonists to the King, which led to King Kristian’s losing the Swedish crown in 1464 and Dorothea thereby once again losing her life and widow’s pension. Karl Knutsson returned to be the Swedish King twice more before his death in 1470, but it was Sten Sture senior who was to be the new opponent to Dorothea.

Sten Sture became regent in 1470 and it was not long before he also came to experience Dorothea’s determination. Dorothea had namely turned to the Pope to get the matter cleared up, and on her visit to Rome in 1475, Pope Sixtus IV issued a papal bull of excommunication against those who refused to give the Queen her rights. During the following years, Dorothea single-mindedly carried on a lawsuit against Sten Sture, who was convicted and excommunicated by the Pope in May 1486. In December 1488, the Swedish regent wrote to Dorothea’s son, who had become King of Denmark after his father’s death, begging him to prevent his mother’s litigation. That did not help at all, and Dorothea visited Rome again the same year to pursue her cause with the help of the Pope.

It was hardly likely that Dorothea’s battle for her life or widow’s pension was grounded in personal greed, but rather in political strategy. Excommunication of the Swedish regent would open the way to the Swedish throne for her son.

Dorothea is accorded several lines in the Sture’s Chronicle (Sturekrönikan), in which the chronicler asserts: “about Queen Dorothea I cannot write anything good, only bad ignominy and spit, for that was the worst woman you could ever find”. Rather than being a description of her person, these lines should be read as evidence of her political importance. She used her remarkable energy and enterprise to support King Kristian I and above all her son Hans. Dorothea was the progenitrix of the Oldenburg family and she participated in decisions about the succession that led to her sons’ later being elected as the Kings of Sweden. Her long battle for her life or widow’s pension, lasting several decades, was also a persistently recurrent problem for Swedish regents.

Queen Dorothea died in 1495 and was buried beside King Kristian I in the Cathedral at Roskilde. There is a portrait of her on the triptych from Nyborg Castle, now in Nationalmuseet in Copenhagen. 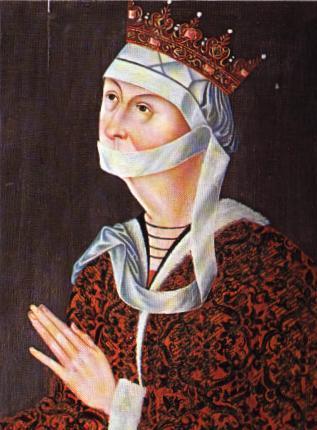