Ebba Brahe was a countess and a manager of property holdings and industrial enterprises. She was also politically influential.

Ebba Brahe was the only child of Brita Leijonhufvud and Magnus Brahe. Through both her maternal and paternal ancestry she belonged to politically and economically significant Swedish families. Her maternal grandmother Ebba Månsdotter (Lilliehöök) had been one of the most belligerent women of her time, while her maternal grandfather had been the Swedish queen Margareta Leijonhufvud’s brother. Thus Ebba Brahe was related to the royal family. Through her father she belonged to the most prominent of Swedish noble families, the Brahes.

Ebba Brahe lost her mother when she was 15 years old. In 1611 she became a lady-in-waiting at the royal court. The royal court served as a kind of educational institution for the girls and young women of the upper nobility where they not only learned social customs and traditions but also – to use a modern term – created networks. The leading force at the Swedish court following the death of King Karl IX in 1611 was his widow, Queen Kristina of Holstein-Gottorp. It was under her guidance that Ebba Brahe was educated in the skills of being a lady of the nobility.

During her time at the royal court Ebba Brahe began a relationship with King Gustav II Adolf, which lasted for three years. It is likely that the king intended to marry her but, because the Dowager Queen Kristina was against it, the relationship was ended.

In 1618 Ebba Brahe married the military man and count Jacob De la Gardie. The family lived in various places across the Baltic during De la Gardie’s military deployments. The sources tell us that Ebba Brahe had several children during this period and longed to go home to Sweden. In 1628 the whole family did return to Sweden and from that time onwards Ebba Brahe came to take an increasingly active role managing property and various industrial sites. She also actively networked on behalf of her children. She was careful to ensure that her children maintained a close relationship with King Gustav II Adolf’s daughter Queen Kristina, and her relatives from the Palatinate who lived in Sweden. Ebba Brahe also wanted her children to nurture contacts with members of the powerful Oxenstierna family.

When Ebba Brahe’s father died in 1633 she inherited industrial works at Axholm, Färnebo, Långsjö and Svanå in Bergslagen. She took great interest in these industrial sites for the rest of her life and her letters reveal that she visited them often and genuinely played an active role in running them. Her husband shared her interest but, due to increasingly failing health, over time he became limited in his abilities to work, particularly after he lost his sight. Swedish exports of iron bars increased tenfold during the first half of the seventeenth century and the works which Ebba Brahe and her husband ran played a part in this expansive rise.

Ebba Brahe was widowed in 1652. The property acquisitions which she and her husband had made, and those she had inherited from her father, meant that she was now fully occupied with running estates and industrial sites in Uppland, Södermanland, as well as Bergslagen. She held a ten-year monopoly on iron bar exports to Amsterdam. After a lengthy and complicated inheritance quarrel Ebba Brahe also came into ownership of her mother’s childhood farm of Kägleholm in Närke, and Tullgarn in Södermanland. At Kägleholm Ebba Brahe was able to increase the production of iron, whilst Tullgarn came to supply profitable fishing from its streams. After the peace of Roskilde in 1658, Sweden gained control of Scania from Denmark. Affluent Swedish noble families bought properties in the region, thereby playing a fundamental role in integrating Scania fully into Sweden. Ebba Brahe became part of this development when she bought Herrestad and Bjersjöholm in 1668. Similarly, her daughter Maria Sofia De la Gardie bought Krapperup near Höganäs, and Ebba Brahe’s son Pontus Fredrik De la Gardie used his wife’s money to buy Skarhult just outside Eslöv.

Ebba Brahe’s position as a property and works owner meant that she became locally powerful. In addition to running the works and those employed in them, she also made use of her “patronsrätt” (the rights a local landowner had to decide over church matters) in several parishes. Her letters contain several examples of her manoeuvers in support of particular candidates for the role of parish priest, as well has how she supported employees who sought help from the state. As a widow she often turned to her son Magnus Gabriel De la Gardie and through him tried to obtain benefits for people around her whose loyalty she wanted to reward.

Extremely little is known of what education Ebba Brahe received as a child, or as a young adult. It is likely that she was brought up according to the ideas of her paternal grandfather, Per Brahe, as expressed in his book Oeconomia eller Huuszholdzbook, för ungt adelsfolck. In it he specified that young ladies of the nobility should learn to read and write, and know the catechism. Further, they should know how to bake, brew, spin and weave, so that as adults these ladies would be able to run a household and be in charge of and teach those who served them. Presumably any theoretical education was rather limited. However, Ebba Brahe’s early years saw her surrounded by women of great integrity who exercised a certain amount of power. Of course the same can be said of the men Ebba Brahe was surrounded by, but it is possible that women like her maternal grandmother and the Dowager Queen Kristina, amongst others, contributed to an informal kind of upbringing allowing her to become an active dynastic strategist and both economically and politically powerful. 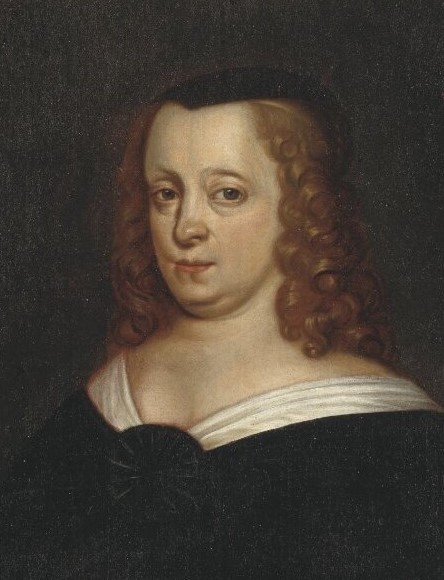