Noblewoman, lady of the castle, landowner

Ebba Gustavsdotter (Stenbock) was a baroness who played an important role in Swedish political life at the turn of the seventeenth century.

Ebba Gustavsdotter was born around 1550. Her father, Gustav Olsson, a member of the Stenbock family, was one of King Gustav Vasa I’s closest supporters, while her elder sister Katarina became the king’s third wife. Katarina remained a supporter of her younger sister, Ebba Gustavsdotter, throughout her life and she arranged the marriage between Ebba and Klas Fleming, a nobleman and knight who owned Svidja farm in Nyland, Finland. Klas Fleming was a member of one of the most powerful families in the eastern part of the Swedish kingdom. The people complained, however, that he was a callous man whilst his social peers considered him to be unreliable and cruel.

Ebba Gustavsdotter rarely appears in sources before 1597. She seems to have frequently accompanied her husband on various political duties but she also spent longer periods living with her sister, Katarina, at the latter’s castles of Strömsholm and Kastelholm. The sisters’ correspondence provides an insight into their family life. Ebba Gustavsdotter had at least three daughters and three sons. Two of her sons died in early childhood whilst she herself also suffered from ill-health and physical weakness. Ebba Gustavsdotter is noted in subsequent memoires as a friendly hostess at Åbo castle, who, in motherly fashion, personally cared for a young noble boy who had been injured in an accident at the castle farm.

Following the death of King Johan III of Sweden in 1592 Ebba Gustavsdotter and her family became drawn into the power games which erupted between the newly crowned King Sigismund and his paternal uncle, Duke Karl (later King Karl IX). Whilst the duke was able to gain power quite rapidly in Sweden proper, Klas Fleming continued to defend the reigning king in the eastern part of the kingdom through his own role as marshal of the realm, admiral, and governor general of Finland.

Ebba Gustavsdotter is noted as one of her husband’s advisors and some accounts imply that she tried to persuade her husband to enter into peaceful negotiations with Duke Karl. The duke was, after all, a cousin on her mother’s side. Indeed, on several previous occasions Ebba Gustavsdotter had successfully helped others who had been imprisoned for political reasons to regain their freedom. She, as was normal for the times, played an important role as mediator between Klas Fleming and those who sought his favour.

Klas Fleming died in 1597, not long after he had foiled the peasant revolt known as ‘Klubbekriget’ (the Cudgel War). It now fell to Ebba Gustavsdotter to defend King Sigismund’s position in the feud with Duke Karl. She may have disagreed with her husband on certain political issues and personal decisions but as his widow she was determinedly loyal. She swore that she would clear her late husband’s name of hostile accusations, in accordance with the promises she had personally made to him shortly before his death.

As official posts were heavily tied to the individual appointed to fulfil them, as were the individual’s family and household, it was not common for a widow to take over certain of the duties. Ebba Gustavsdotter thus participated in discussions regarding the selection of her husband’s replacement. Her involvement was criticised by some noblemen who believed she was trying to exploit her late husband’s authority. However, her help was necessary as it was she who summoned the nobility to a meeting at Åbo castle, she who had the requisite connections with King Sigismund’s court, and she who had personal knowledge of Klas Fleming’s plans and earlier negotiations with Sigismund’s supporters.

The pro-Sigisumund faction lauded Ebba Gustavsdotter as a fearless ‘manly’ woman who personally served as a good role model when Duke Karl’s army arrived in Åbo in the autumn of 1597. Contemporary sources recount that she took charge of the defensive forces and exhorted them to remain loyal. She was described as an inspiring leader despite lacking any formal legal power as such. After several weeks, however, her troops grew tired of defending Åbo castle and both Ebba Gustavsdotter and Bengt Söfringsson, the commanding officer, agreed to surrender. She handed the keys to the castle over to Duke Karl and was then taken prisoner and removed to Stockholm.

In conjunction with the surrender it is said that the duke had the late Klas Fleming’s coffin opened just to ensure that he was truly dead. Tradition has it that Duke Karl shook the corpse and pulled the dead man’s beard whilst exclaiming that he would have preferred to have captured Klas Fleming alive. A short version of this account was found in a contemporary source, but subsequently either tradition or some unknown historian added a snide answer from Ebba: “Had my husband lived your princely grace would never had made it inside the castle”. This story has come down to us through Zacharias Topelius’ book Boken om vårt land as well as Albert Edelfelt’s painting entitled Hertig Karl skymfar Klas Flemings lik, from 1878.

Duke Karl confiscated the family’s holdings and properties. Ebba Gustavsdotter and her daughters were placed in prison or under house-arrest in Stockholm. She did, however, successfully make contact with Sigismund’s supporters – including her own son Johan Fleming who was in Poland – but by the end of 1599 all was lost. Duke Karl undertook a second campaign across to Finland and Ebba Gustavsdotter’s last surviving son, the twenty-one-year-old Johan Fleming, was executed in Åbo that year. 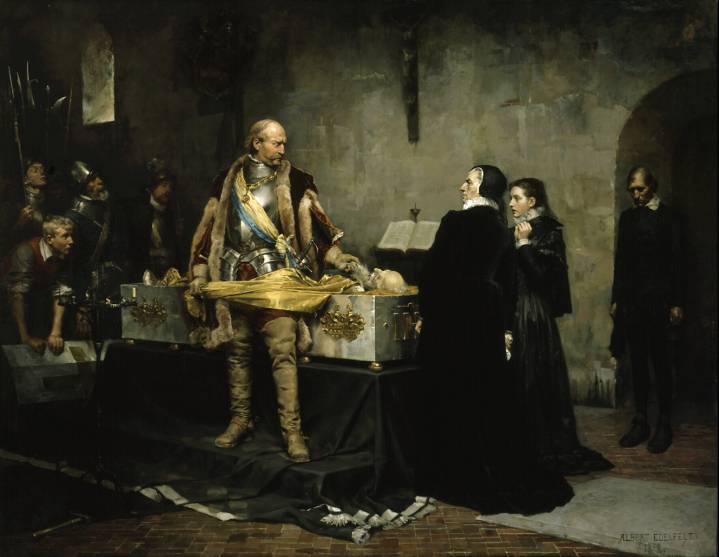