Marianne Greenwood was a photographer, an adventurer, and an author. She created a unique ethnographic archive.

Marianne Greenwood was born Ebba Marianne Hederström in Gällivare in 1916. Her childhood was spent in an hospitable home where cultural and academic interests were encouraged. She had three brothers and two sisters. Her mother, Elin, loved to travel and had named Marianne in honour of the personification of the French revolution. Her father, Sune, was a head forester who had a great love of nature and was a keen reader of National Geographic. He was sometimes visited by adventure-travellers such as Sven Hedin and Knut Rasmussen and his own cousin, Gösta Montell, head of Etnografiska Museet. All these early influences certainly helped to form Marianne Greenwood’s great love for travel.

However, Marianne Greenwood’s career began in a conventional manner. Just before the outbreak of the Second World War she made her way to Stockholm in order to study at Konstindustriella fackskolan. For a brief time she earned a living producing architectural drawings as part of the VVS project. She had also married a forester named Karl-Bertil Hedberg, with whom she had two children named Christer and Lilian. Her daughter died when she was just one month old leading Marianne Greenwood to decide to leave her husband and her secure lifestyle in Sweden. Later she described the death of her daughter in these words: “There and then the vagabond was born”.

As the Second World War raged Marianne Greenwood made her way to Lausanne where she attended a hotel management school. Her son, Christer, remained with her parents. However, Marianne Greenwood interrupted her studies in order to marry a British business man and millionaire named Anthony Greenwood. They had a son together who was born in London. It was not long before her life of luxury lost its lustre and within a couple of years Marianne Greenwood decided once again to leave everything behind and set off. All she took with her was her second husband’s surname (their divorce was only finalised in 1978) and her wedding ring. Her second son, Alan, remained with his father. Marianne Greenwood's contact with both of her sons during their childhoods was sporadic in nature and largely occurred through the postcards she sent.

Marianne Greenwood sold her wedding ring and used the money to acquire her first Hasselblad camera. She and her camera arrived in a Paris that was still war-ravaged – without a penny to her name – in the early 1950s. The tall blonde who went barefoot and wore men’s shirts cut to size quickly became a popular model amongst the young artists of the day. She became a close friend of Pablo Picasso and his family. She spent seven years living and working at the first Musée Picasso in the Grimaldi castle of Antibes, serving as a guide and house photographer. She undertook a huge project to document and publish the art collections (which included a publication entitled Picasso à Musée d’Antibes from 1954). The sole drawing she ever received from Picasso she subsequently gave away, but she did often serve as a model for Françoise Gilot, Pablo Picasso’s partner at the time. Gilot’s drawings are preserved in the book Pages d’Amour, which was published in 1951 and is dedicated to Marianne Greenwood.

Authors and artists from all over the globe were drawn to Antibes leading Marianne Greenwood to meet a variety of celebrities including Fritz Lang, Henry Miller, Andy Warhol, and Anaïs Nin. The latter went on to describe Marianne Greenwood as “the eternal vagabond” who had “a rare talent for friendship”. Marianne Greenwood’s most remarkable friendship in Sweden was without doubt the one she had with Evert Taube, another person she first met in Antibes. Their “passionate friendship” led to the poetry collection entitled Septentrion from 1958 as well as the books Svarta tjurar, also published in 1958, and Återkomst from 1961, which contained text by Taube and photographs by Marianne Greenwood. The image of Evert Taube which is familiar to the majority of people, that of a Rönnerdahl child of nature wearing a white shirt and bearing a wreath of flowers in his hair, was arranged and taken by Marianne Greenwood in Antibes.

Whilst she considered it a positive thing to be called a creative man’s muse Marianne Greenwood also felt that her close relationship to Evert Taube placed her in an awkward position in Swedish cultural circles. Her book, Evert Taube – ett personligt porträtt, published in 1984, was received with great silence in Sweden. “It was probably felt that I had dragged a national hero through the dirt”, Marianne Greenwood said in an interview for the magazine Vi in 2000.

In 1960, Marianne Greenwood planned on accompanying Evert Taube on his travels through South America, but when he failed to show up on time, she grew tired of waiting and headed off alone. Initially she travelled from Guatemala to New York, serving as a waitress on a Norwegian vessel. When she disembarked in New York she had nothing but her seaman’s papers and her camera. She presented her photographs of the rainforest to various publishing houses and soon found a taker. This led to a 30-year period of endless travelling with her camera as her sole constant companion. Lacking in language skills but possessing a unique talent for meeting and understanding people Marianne Greenwood hitched her way around the globe, far off the beaten tracks. She has described herself as a hippie before the hippie movement was even born – poor but curious, constantly restless, with an undying hunger for new connections. During that 30-year period she took tens of thousands of photographs, documenting the everyday lives and celebrations of the folk she met on the road, from indigenous people in North and South America to the peoples of Afghanistan, Nepal, Thailand, and Papua New Guinea. She would often spend lengthy periods of time with families who took her in but always adapted to their conditions. She was thus able to establish trust and many of those she met on her travels remained friends she returned to for the rest of her life.

Marianne Greenwood’s unique ability to get close to people in spite of cultural differences almost makes it misleading to describe her photographs as ethnographic works – she never considered herself to be a documenter of indigenous peoples; she was quite simply photographing her friends in the same way that she took portraits of Western cultural celebrities such as Doris Lessing and Malcolm X. Her published travelogues, including the 1964 Det Tatuerade Hjärtat i Livingston and Varför gråter puman? from 1984, are not ethnographic studies of the cultural ‘Other’ but rather reflect her personal impressions and experiences. Her portraits of the people who took her in along the way are warm but her books do not shy away from the sometimes dangerous times, and intermittent episodes of hunger, she experienced. For example, she had her beloved sailboat the Pen-Kalet (Breton for numbskull), in which she spent five years sailing to South America and Oceania in the late 1960s, stolen from her by a couple that she had fallen in with.

Marianne Greenwood never sought out fame or riches but lived hand to mouth. Due to her nomadic lifestyle her output as a writer and a photographic illustrator, both of her own and other people’s texts, never became particularly extensive. As most of her work was produced in English, French, and German – such as Charleton Beale’s 1967 book Land of the Mayas and the articles in Mankind Magazine and Meridian Magazine – she remained largely unknown in her home country. Whilst Marianne Greenwood was known as a photographer and adventurer in European and American circles, back home in Sweden she was merely Evert Taube’s ‘bit on the side’. When Resa i min adressbok was published in 1989 it was not reviewed in Sweden’s major daily newspapers and there were even those who believed that she had imaginatively spiced up her stories because it was just not considered possible that one person had been through all those experiences.

Having spent thirty years travelling Marianne Greenwood returned to the Lapland of her childhood to spend time living amongst the Sami of Jokkmokk. However, when she finally decided to settle down at a permanent residence it was in Antibes. There she chose a studio apartment not far from the Musée Picasso. Towards the end of her life one of the things she devoted herself to was translating her own books for publication in several languages. A large portion of her almost 30,000 strong collection of portraits of people from around the globe were given a home at Etnografiska Museet in Stockholm. However, a lot of her work had been lost along the wayside, including irreplaceable pictures of Picasso which she had entrusted to a friend.

Marianne Greenwood’s final years were eventful ones and entailed receiving both Swedish and international recognition for her work. In 2005, in conjunction with a New York exhibition of her work, she was awarded the prestigious “Women of Discovery Award for Lifetime Achievement” by the Wings World Quest organisation for female adventurers. She was then contacted by Titti Johnson and Helgi Felixson, both film-makers, who had previously wanted to make a documentary about her. This time she accepted and she was able to provide enough interview material to enable Motståndare till längtan – En film om Marianne Greenwood to be completed posthumously, in 2008.

In 2006, just a week after a major exhibition of a selection of her photographs had opened at Etnografiska Museet in Stockholm, Marianne Greenwood passed away at her home in Antibes. She was honoured by an exhibition held in her memory at the Musée Picasso. In typical fashion her death generated greater attention in France and elsewhere than it did in Sweden. Titti Johnson believes this lack of recognition in Sweden is primarily down to two aspects: partly the fact that she published her Swedish-language books through smaller publishing houses which rarely gained exposure in the cultural print media, and partly because she, unlike her contemporary esteemed “ethnographic” photographers, was a woman.

Marianne Greenwood died in 2006 at the age of 89. Her remains lie at Norra begravningsplatsen (the Northern Cemetery) in Solna. 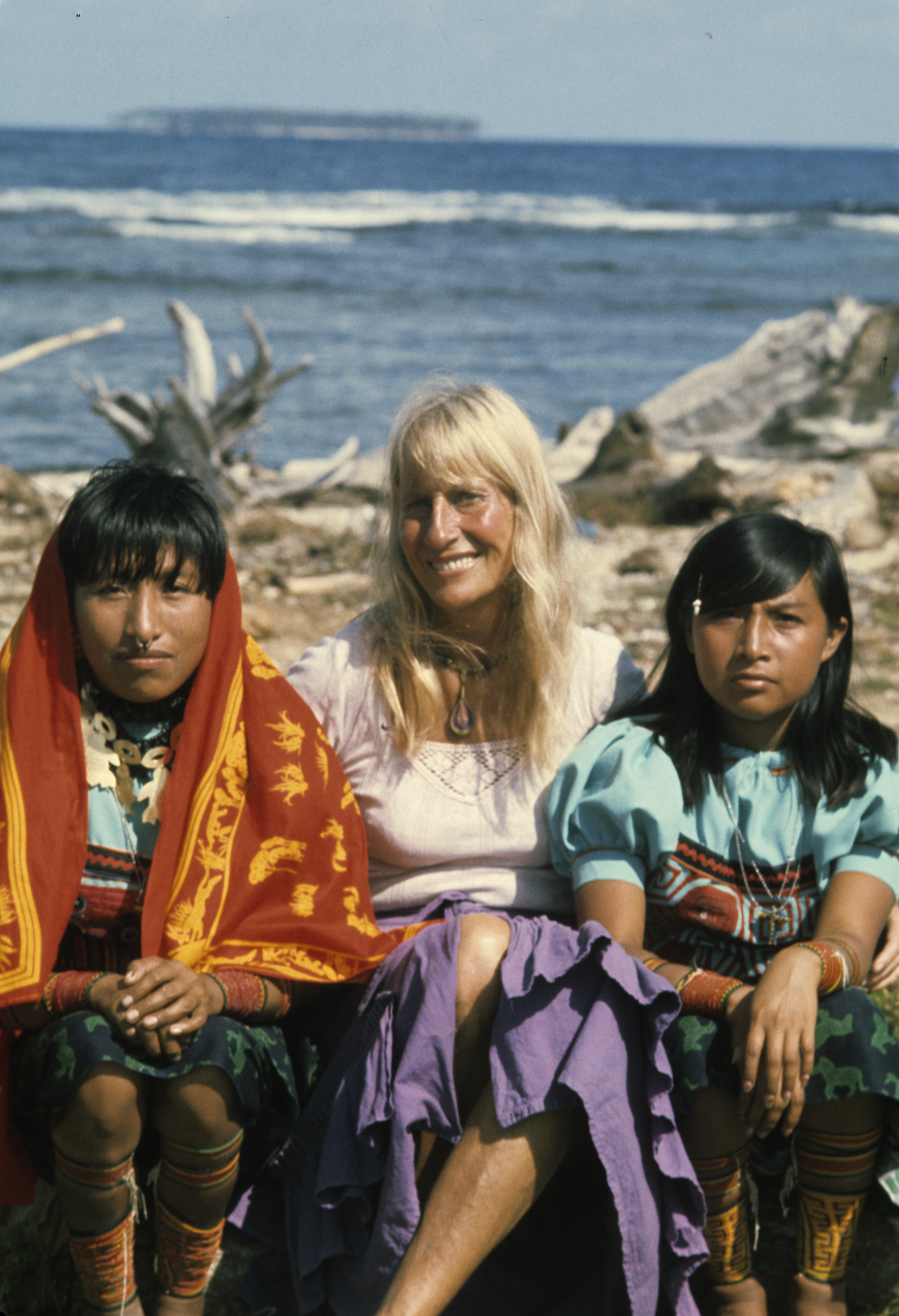