Ebba Nordenadler was an author and a translator, mainly of books for girls.

Ebba Nordenadler was born on 18 March 1864 in Hudiksvall. She was the only daughter of the doctor of philosophy Marcus Wester and Hilda Engelke. Her father was initially an assistant teacher and then editor of Hudiksvallsposten, and finally a rural dean in Trögd near Enköping. Ebba Nordenadler lost her mother when she was only nine years old. Her father later remarried to Kristina Ottilia Isaeus, and they had a daughter called Amy Sofia. Despite these events Ebba Nordenadler appears to have enjoyed a harmonious childhood at Veckholm deanery, which later came to play a significant role in her writing.

In 1892 Ebba Nordenadler became engaged to forester Herman Nordenadler. The following year she, as a 29-year-old, graduated from Palmgren co-educational school in Stockholm. It was likely that she intended to seek employment outside the home. She had a role model on her mother’s side in the author Jenny Engelke and Ebba Nordenadler described her achievements in the journal Idun in 1907. Amongst her friends she also counted the eminent literary critic Klara Johanson.

Ebba and Herman Nordenadler got married in 1894. They had two daughters, Eivor and Louise, and a son called Karl Erik Hermansson. A second son only survived a few months. The family initially lived at Verka north of Stockholm, but when Herman was appointed extra forester in 1908 they moved to Eksjö.

In 1894 Ebba Nordenadler published her first short stories and translations in Svenska Dagbladet. The short stories often focused on priests or had connections to vicarages. “I eget hem”, for example, tells the story of a newly wed couple who finally gain access to a home at the vicarage after many years’ waiting. Another work based on a similar theme is the sacred story “Paradisets lustgård. En dröm af Ebba Nordenadler, f. Wester” and the short story “Förlåt”, where the main character is a female pastor. The vicarage also recurs in her books for girls: Den gamla prästgården: berättelse för flickor, 1901, and Det var då: fortsättningen af Den gamla prästgården, 1903.

Ebba Nordenadler’s first novel is, however, set in a girl’s school. In 1899 she sent a manuscript entitled I Edsbro pension to Norstedts publishers. In an attempt to sell the novel she approached the Fredrika Bremer association’s book committee as they had noted that there was a lack of Swedish girls’ school stories. To further strengthen her chances of getting her manuscript favourably reviewed she wrote: “If I had not heard from my husband, forester Nordenadler, of your goodwill and benevolence I would probably not have turned to you.” This letter made reference to her husband’s employment by Norstedts as a translator. Despite this, for some unstated reason Norstedts declined to publish her manuscript. I Edsbro pension was instead published by Beijers in 1900. The reviewer for Dagens Nyheter described the book as a “very pleasant girls’ story”. In 1901 Ebba Nordenadler released another girls’ book, Den gamla prästgården: berättelse för flickor, which was later re-titled Tomteboda prästgård, 1924, for the Barnbibliotek series. Two years later the sequel was published: Det var då: fortsättningen af Den gamla prästgården, 1903.

Initially she would write alongside her translation work, but the writing quickly took over. Like her husband, Ebba Nordenadler mainly translated literature for children and young readers, but she also dealt with light entertainment literature for adults. It was not unusual for the couple to translate different works by the same author, for example Frances Hodgson Burnett, Beatrice Harraden, Edith Nesbit, and Robert Leighton. It is probable that the couple helped each other out with the translations, particularly as the last translation officially completed by Herman Nordenadler was published in 1912 whilst Ebba Nordenadler continued her translation work until her death.

Ebba Nordenadler translated from Norwegian, Danish, German and English into Swedish. She herself would suggest works that she felt were worthy of translation. It was typical of her that she approached Norstedts publishers in 1915 just as her main employer, the Beijers publishing company, began to lose its position in the market. In 1917 Beijers merged with the Bonniers publishing company. Norstedts rejected all of her proposals and thus a little later in the 1920s Ebba Nordenadler offered her services to the B. Wahlströms publishing house. Her first job for Wahlströms was to translate two books for girls by the Danish author Anna Baadsgaard, and they wanted this completed within six weeks. Part of the job involved shortening down the books by “removing unnecessary parts from the originals”. Ebba Nordenadler’s correspondence with Wahlströms also reveals that she was conscientious about maintaining high standards of language in her texts and that her translations generated well-deserved compliments. Her translation of Thackeray’s The Rose and the Ring (in Swedish Rosen och ringen) led a reviewer to comment that “the translation has been undertaken with intelligence and humour”.

Ebba Nordenadler was a very pious woman. Her mother-in-law Louise Nordenadler’s obituary conveys a traditional view of women as spouses and mothers. However, this view of women directly contradicted Ebba Nordenadler’s own life experience as a professionally active author and translator. She combined work with family commitments throughout her adult life. When her children were young she repeatedly advertised for nursemaids in the newspapers. The same year that she exalted her late mother-in-law’s assiduous life as a housewife she herself took on six translations, largely of adventure novels and detective novels, each published by different publishing houses.

Ebba Nordenadler remained a very active translator right until her death. She died aged 67 in November 1931. The same year three of her translated novels were published. 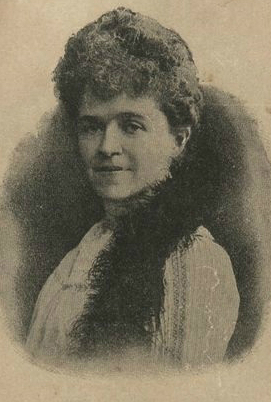