Ebba Ramsay was an author, a translator, and a philanthropist. Her philanthropic efforts particularly involved the care of handicapped children.

Ebba Gustava Ramsay was born in Stockholm in 1828. She was the daughter of Wilhelm Svedin Karström, the head of customs in the district, and his wife Carolina Catharina Almqvist. Her childhood home was heavily religious. Ebba Ramsay attended Augusta Bjurström’s boarding school, studied music at Adolf Lindblad’s institute, and also studied languages. She learned to draw and paint at an early stage, and later she tended to work in water-colours when she was travelling. When she was nineteen years old her family moved to Gothenburg. There she became the secretary of a society which supported single mothers and this put her into contact with children who were ill or handicapped.

The heavily religious nature of her childhood home was also expressed in her adult life. She was involved in her home town’s revivalist movement within the church. Through this movement she met Betty Ehrenborg-Posse as well as Mathilda Foy, the daughter of the British consul-general. The three of them became some of the earliest Sunday School teachers in Sweden. From the 1870s onwards she served as editor for Svenskt Söndagsskole-Bibliotek (Swedish Sunday School library). She was also active with domestic missionary activities in Jönköping, where she had settled in 1860 with her husband Carl Magnus Ramsay.

Ebba Ramsay spent much of her adult life working with child rearing matters and childcare and youthcare, all from the perspective of her religious beliefs. She developed an interest in handicapped children at a young age and, following a study trip to England in 1854, she took this interest further. During the 1860s she set up a junior school in Jönköping and, in 1874, she opened a home for ill and “lame” children, which was situated on Vättern north of Jönköping. Her father had acquired the land precisely for this purpose and had named it Wilhelmsro. Within fifteen years the home primarily catered for children suffering from epilepsy. Later she, along with others including Princess Eugénie, established a society to provide care for Stockholm’s sick children. Eugeniahemmet opened in 1880 and remained in service until 1971.

Further to her activities on behalf of children and young people Ebba Ramsay also spent her time writing and was responsible for a sizable number of translations, all of it reflecting the same Christian beliefs. Her authorial debut came through a poetic work entitled Sanning och dikt. Pennritningar från Skärgården, published in 1854. Her poetic themes are traditionally religious but also include aspects of social activism. It is probable that her writing and translation work increased after 1870. She published nearly one hundred works in the ensuing years, usually under the signature of E. R-y. The vast majority of these writings were brochures which included instructions for Sunday Schools and other spiritual subjects, but they also included information for carers of epileptics, temperance matters, and children’s health. A lot of her publications were directly related to her own activities, such as the 1894 work entitled Om Wilhelmsrokolonien för barn. Ebba Ramsay also wrote biographies, such as ”Tag och läs.” Augustini lif, published in 1902, a collection of ballads, and a fairy-tale book. Further, she also published and edited several series of pamphlets for Sunday Schools, produced a brief run of children’s magazines in Gothenburg, as well as a few missionary publications. Just a few years before her death, in 1919, she released through Norstedt publishers her memoires entitled Från mina barndomsdagar 1828–1845.

Ebba Ramsay’s writings and her translation work must be seen against the background of the marked increase in publications of religious material from the late 1850s onwards. At that point the Conventicle Act had been abolished and it became legal to meet for bible study and religious conversations in private homes without the presence of a priest. The flourishing of publications served an important basic need for all who wanted to discuss religious or social issues in this new context.

Ebba Ramsay was also a productive translator, mainly from English into Swedish, but also from French and German into Swedish. Just like her own publications these tended to be brochures. Her first translation was, however, voluminous: this was Catherine Maria Sedgwick’s Gift och ogift eller Ännu några sanna skildringar ur det husliga lifvet, 1852–1853. It comprised a two-volume set which numbered over 700 pages. Her translations often included markings, edits, or loose translations, particularly where Christian passages were involved. Several of her translations included Biblical themes from both the Old and the New Testaments. She was also quite loose with her translation of the highly popular contemporary English author Charlotte Tucker’s books for young people.

Ebba Ramsay’s main significance lay in the fact that through her engagement across a variety of spheres, at a time when handicapped children tended to be overlooked, she highlighted the importance of affording these children adequate care.

Ebba Ramsay died in Jönköping in 1922. 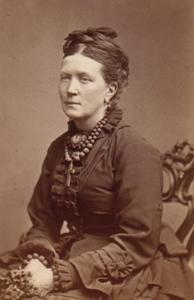