Ebba von Eckermann was a pioneer in the conservative women’s movement. She was the first chair of Moderata Kvinnoförbund (the Moderate Women’s Association).

Ebba von Eckermann was born in 1866. Her father, Walther von Hallwyl, was a military man and a count from Switzerland, and her mother, Wilhelmina von Hallwyl, née Kempe, was the only child of Wilhelm and Johanna Kempe. The Kempe family had built up a considerable fortune by establishing sawmills in Norrland. Ebba von Eckermann and her sisters were educated at home combined with trips to Europe, for instance to Switzerland, France and Italy where their father had relatives. These trips made Ebba von Eckermann very familiar with Europe and its many languages. At the age of 16 she began to attend the Wallin school in Stockholm, whilst staying with her maternal grandparents. She gained her school-leaving certificate as a private student at the age of 18. Ebba von Eckermann’s greatest desire was to continue her education, particularly to study architecture, but her parents decided that she should marry instead. In 1885 Ebba von Eckermann became engaged to naval lieutenant Wilhelm von Eckermann. They married in the following year and moved to Karlskrona.

During her early student days Ebba von Eckermann had been approached by Sophie Adlersparre, who recruited her to join the newly established Fredrika Bremer association in Stockholm. However, the move to Karlskrona caused a break in their relationship. In the meantime Ebba von Eckermann had three children. Her husband subsequently fell ill and left the navy, which meant that the family returned to Stockholm. Although the couple had a fourth child together in 1893, the child did not survive a case of diphtheria and died aged six.

Ebba von Eckermann received a large dilapidated estate in Södertuna, Sörmland from her maternal grandmother. She then set to renovating both the main building and the farm. Another move was on the cards and the whole family moved to Södertuna while maintaining their Stockholm networks. Later on Ebba von Eckermann made Södertuna available to the Swedish girl scouts for summer camps.

Ebba von Eckermann became active in the Fredrika Bremer association again and took on the position of chair of the association’s stipend for the education of poor girls, which she came to hold for 50 years. She became a member of Landsföreningen för kvinnans politiska rösträtt (LKPR, National Association for Women's Suffrage) when it was established in Stockholm and worked with women’s defence associations; here she met like-minded women who were not rooted in any particular political party. At the time conservative women still did not have access to a political party. Thus Ebba von Eckermann took it upon herself to organise the conservative women.

In 1909 the parliament affirmed women’s rights to participate in municipal elections and to stand for election to municipal councils. Valfrid Palmgren was elected for Allmänna valmansförbundet (AVF, today Moderaterna) in the 1910 election. Valfrid Palmgren was also supported by the women of the Moderate party and she made significant contributions during her brief period as a municipal councillor, particularly for libraries. She got married in 1911 and then moved to Copenhagen, which meant that she had to resign from the council. The women of the Moderate party then decided to become organised as an independent women’s association. In March 1911 Lizinka Dyrssen, Louise Stenbock and Cecilia Milow met at Ebba von Eckermann’s house to set up a temporary committee and work out proposals for statutes. On 28 April that year the Stockholm Moderata women’s association (MKF) was founded. The statutes highlighted the independent nature of the organisation and its intention to reform. The first committee comprised twelve women, who were mainly financially independent and active members of LKPR, charitable organisations and women’s defence organisations. Ebba von Eckermann was elected chair. The association worked intensely ahead of the district elections, holding courses, giving lectures and enabling discussions, and by the time of the 1912 election they had already managed to get their own candidates placed high up on the voting lists, resulting in several of these women becoming successfully elected.

In 1913 the women of the Moderate party became recognised as official party members of AVF but, as women’s suffrage was not a priority until 1914, the Stockholm-based association decided to expand and become a national association. The members outside Stockholm were numerous and on 15 May 1915 Sveriges Moderata Kvinnoförbund (SMKF, Swedish Moderate party women’s association) was constituted with Ebba von Eckermann as its chair. Their independence was reflected in part by the fact that it was the women themselves who financed the association through their subscriptions and by the fact that local associations elected their own committees.

SMKF took formal positions on political issues by taking decisions at their representative meeting. This was particularly true for women’s and family issues, such as support for large families, increased salaries and better training for midwives, harsher punishments for immoral behaviour and crimes against minors. In 1918 SMKF took action against the so-called “reglementering”, state-sponsored investigation into female prostitutes in order to track venereal diseases. Given that the prostitutes’ male clients were not investigated to see whether they had been infected the diseases continued to spread.

SMKF engaged in lobbying and Ebba von Eckermann gained a respected reputation in Stockholm. She was also the association’s most prominent public speaker, and as such travelled throughout Sweden. As it was sometimes difficult to obtain premises for meetings she carried a collapsible lectern, which could even be set up outdoors. In 1922 the association began to release a members’ magazine called Medborgarinnan. The association’s finances improved when Dagmar Svensson, who was an accountant, began to work for Borgerliga Kvinnors Ekonomikommitté in 1921. Now internal training could be delivered across the country.

Ebba von Eckermann lost her youngest son to diphtheria, and then lost her eldest daughter – who had trained to become a doctor – to tuberculosis aged only 26. These experiences fuelled Ebba von Eckermann’s commitment in support of health care. She was on the board of both Sophiahemmet and Eugeniahemmet. There was a special project within SMKF in support of health care in the sparsely populated areas of Sweden in the middle of Norrland as well as in Jämtland, Dalarna and Värmland. Each local association ran fundraising activities and the money raised was used by the Red Cross in order to fund medical centres in these areas.

Ebba von Eckermann died in 1960. She is buried at Frustuna cemetery. 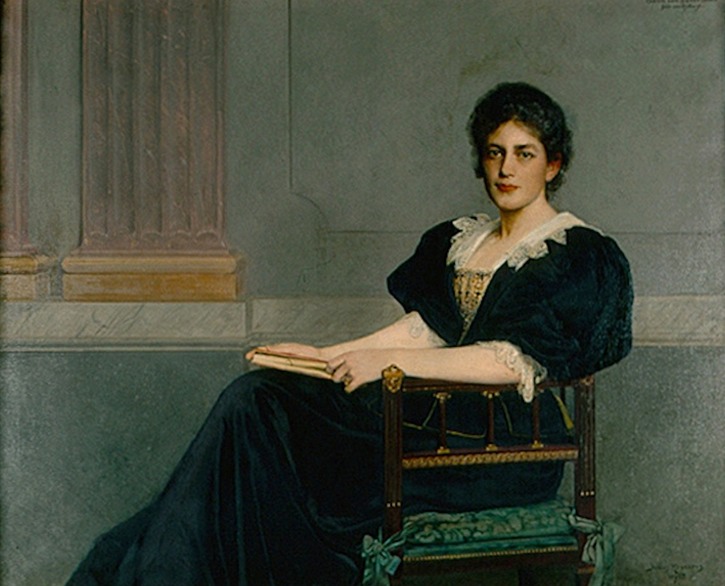