Elin Engström was a pioneer of the workers’ and the Social Democratic movements. She was also one of the founders of Stockholms allmänna kvinnoklubb (public women’s club).

Elin Engström was born in Stockholm in 1860 and named Augusta Eleonora Carlsson. Her father, Fredrik Carlsson, initially worked as a driver for the newly-established town doctor. Later he worked as a stoker at the so-called ‘health farm’ of Brunkebergstorg, where Elin Engström’s mother, Christina Carlsson, also worked as a bath attendant.

Elin Engström dreamed of becoming a teacher but following the death of her father in 1874 the family had to move to Kungsholmen. There she was required to help with housework and caring for her younger siblings, tasks which she found boring. In order to entertain herself she often sang whilst doing the chores and she was overheard by a young barrel-maker out in the yard. He took a shine to her and initiated contact. At 18 years of age Elin Engström married the man, called JM Engström, known as John.

John Engström had grown up in very straightened circumstances. He had lost his parents at a very young age but was nevertheless an avid reader and possessed a sharp mind. In the early 1880s he belonged to a small group which became the beginnings of the Swedish workers’ movement. Although women were often present at meetings they were only attending as companions of male participants. Elin Engström was an exception. She had become deeply involved in the movement through her husband and was active in her own right.

The Engström marriage was a happy one. Elin Engström described her husband John as “the most extraordinary husband anyone could have”. They had seven children, born between the years of 1880 and 1889, albeit two of the children died as infants. The couple were both members of Socialdemokratiska föreningen (Social Democratic association) before it was transformed into a regular political party. Elin Engström was one of the few female members and she sewed the first red flags and the first red ribbons and rosettes which were used during the 1 May demonstrations.

In 1886 Elin Engström began to work as a cleaner at the Social-Demokraten newspaper offices. Three years later Sveriges socialdemokratiska arbetareparti (now Socialdemokraterna, Social Democratic party) was constituted, with seven trustees instead of a board. John Engström was one of these seven and while speaking at an outdoor meeting in Uppsala he contracted a severe cold. Having previously suffered from bronchitis and various bouts of haemoptysis, his body was already weakened and in June that year he died from tuberculosis.

Elin Engström was now a widow with five children. In addition to her job at Social-Demokraten she took on various writing jobs, as well as child-minding and laundry services for others. Nevertheless she was still forced to give up two of her children and hand them over to a children’s home. She carried on tirelessly working for things she was passionate about and in 1890 she was a member of Kommittén för den kvinnliga agitationen (later Kvinnornas Fackförbund, women’s trade union association).

Earlier that same year Ellen Key and Amalia Fahlstedt had devised the national guidance for an organisation which contained around 70 well-educated and radical women, divided into six groups of twelve. This experiment evolved into Tolfterna, an organisation which sought to unite women of different professions and classes. Working-class women were invited to attend organised meetings. Elin Engström and her friends became regular guests of Tolfterna. She became good friends with Ellen Key and it was not long before she became a board member of Stiftelsen Strand, to which she was now and then invited by the woman who owned the house. Elin Engström remained a passive member of the foundation until her death.

In 1904 she had been promoted to the post of head of subscriptions at Social-Demokraten and she gained much praise for this role. Her status as a widow and as financially independent, combined with increased income, meant that she was among those women who at that time were allowed to participate in municipal elections. At the third women’s conference, held in 1911, Elin Engström was elected onto the editorial committee, along with Anna Sterky and Kata Dalström. The following year she was one of four women appointed as an expert to the legislation committee tasked with preparing a new code of law for marriage. The other women involved were Emilia Broomé of De frisinnade (the liberals), and Agda Montelius from Fredrika-Bremer-Förbundet, as well as Anna Söderblom who was active in the anti-suffragette movement.

As an active Social Democrat Elin Engström’s activities included the petition for female suffrage as well as organising social events and bazaars in aid of various worthy goals. She eventually became a member of the pension agency in her constituency and then a member of the municipal rent tribunal. She served as chair at peace movement meetings and she was a temporary member of Stiftelsen Kronprinsessan Margaretas Minnesfond and active in other minor women’s organisations.

Elin Engström retired in 1934, following 48 years’ working at Social-Demokraten. A party was held to mark the occasion, attended by Arthur Engberg and Gustav Möller, amongst others. Elin Engström was presented with a golden plaque and danced the last dance with Per Albin Hansson. The next day she turned 75 years old. Five years later the Social Democrats celebrated their 50th year and Elin Engström was seated beside Anna Branting, Per Albin Hansson and other dignitaries in the first row. In December 1949 the by now elderly Elin Engström, Matti af Geijerstam, and Olga Björkegren shared their memories of Ellen Key in an article penned by Barbro Alving for the Dagens Nyheter newspaper.

Ahead of her 90th birthday Elin Engström received a Dagens Nyheter newspaper reporter at her apartment on Falugatan in Stockholm. She recounted her memories of socialism’s earliest days. Elin Engström was also fêted on her 95th birthday, during which she shared further memories. She was similarly forthcoming on a radio programme entitled Svenska arbetare marscherar when she was interviewed by the journalist and author Ture Nerman.

Elin Engström died in 1957 aged 97. She lies at Norra begravningsplatsen (the Northern cemetery) in Solna. 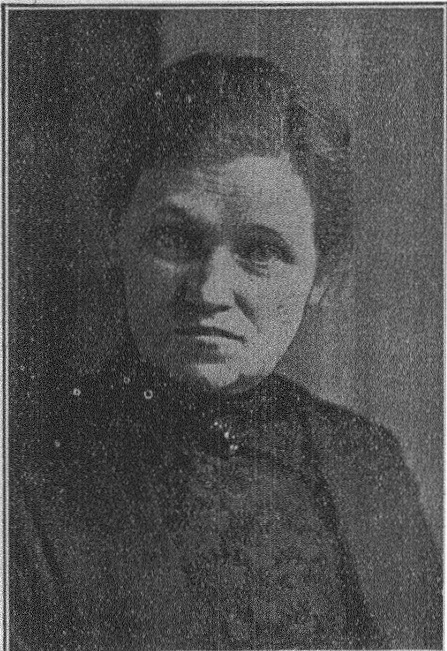