Elin Falk is one of the women who have been most important for Swedish gymnastics and teaching. Of particular significance was her work on adapting school gymnastics to the needs of children.

Elin Falk was born in 1872 in Vassända-Naglum parish in Västergötland. She developed a great interest in gymnastics early on in her life. Having completed her education at an all-girls’ school in Vänersborg, she trained first at Harald Liedbeck’s institute of gymnastics in Stockholm and subsequently at Gymnastiska centralinstitutet (GCI) in Stockholm. After passing her exam as a director of gymnastics in 1895 she spent four years working abroad. Her first position was at the Young Women’s Christian Association (YWCA) in Baltimore, USA, where she worked as a gymnastics teacher and physiotherapist. She went on to hold similar positions in Great Britain and Denmark.

When Elin Falk returned to Sweden in 1900 she was employed as a teacher at Arvedson’s gymnastikinstitut (AGI) in Stockholm. AGI had been founded by the doctor Johan Arvedson in 1890 in order to train female gymnastics teachers and physiotherapists. During her time at AGI Elin Falk began to make adaptations to the general type of school gymnastics at the time which was called Ling gymnastics. Her adaptations received a lot of attention and Elin Falk came to be appointed gymnastics inspector for Stockholm’s state schools in 1909, a job which she retained until she retired in 1932.

When Elin Falk began her job as gymnastics inspector, class teachers were responsible for teaching gymnastics at the state schools. There were very few actual gymnastics teachers employed to help those teachers who, due to age or illness, could not adequately teach gymnastics themselves. The training these class teachers received was insufficient, so Elin Falk initiated and implemented a comprehensive training programme. There were largely no functional textbooks, so Elin Falk was tasked by the state school board in Stockholm to develop proposals for exercises for the primary school pupils as well as the female pupils at state schools. These exercises received a lot of attention and gave rise to what the press came to call “the gymnastics war at Stockholm state schools”. The core of the dispute was the manner in which Elin Falk’s exercise proposals related to the principles of the founder of Ling gymnastics, Pehr Henrik Ling. In the ensuing battle of opinions Elin Falk was supported both by Karolina Widerström, who in addition to being the first authorised female doctor in Sweden had also been a student at GCI, and by a number of teachers at Stockholm’s state schools. Opposition came mainly from the head of GCI at the time, Nils Sellén. He had the support of a number of state school inspectors and gymnastics teachers at GCI and in the state schools. The dispute ended with Elin Falk’s proposals being accepted and becoming implemented in 1913 by the Stockholm state school board.

Elin Falk’s exercises were different in that they had been adapted to children’s needs in contrast to the traditional Ling gymnastics where children were made to adapt to the exercises. She turned away from the military elements such as standing to attention and the use of command words, which previously had characterized children’s gymnastics, and thereby replaced the military connotations of school gymnastics with a more practical everyday focus. She also rejected the stiff and tensed body positions of Ling gymnastics for a more relaxed approach and introduced new playful and joyful exercises particularly suited to younger children. Elin Falk’s view of what school gymnastics should entail is presented in the range of textbooks and articles she wrote.

Elin Falk kept up-to-date with developments in gymnastics on the global front and continually undertook study visits to countries such as the USA, Germany, Switzerland, Denmark and Finland. Her trips inspired her to her next steps in reforming Swedish school gymnastics, namely to adapt gymnastics to what she called the principle of rhythm. This principle implies that during a movement the entire body should be part of the movement’s rhythm. For instance when walking the whole body should move in rhythm to the walk, not just the legs but also the arms, the back and the shoulders. Performing movement as rhythmically as possible saves energy. She got this inspiration from Taylor’s research into tiredness. This research - actually intended to maximise the effectiveness of industrial workers - had entailed in-depth studies of the negative impacts of various movements and strains workers endured. The research had demonstrated the significance of rest and the importance of avoiding unnecessary movements in order to save energy. According to Elin Falk, Ling gymnastics already included energy-saving methods such as isolating particular movements and correcting body position, but relaxation exercises needed to be included in order for gymnastics to become rhythmic. The idea was that only the muscles required for a movement should be activated and the rest should be relaxed in order to avoid the wasting of energy. Elin Falk’s student Maja Carlquist would later develop these ideas even further.

According to her contemporary colleagues Elin Falk was fearless, knowledgeable, enthusiastic, intelligent and sharp-witted. She often and willingly fought for what she believed to be right, she tested and re-tested her own and other people’s ideas. She was a feared gymnastics inspector. Even the teachers who had supported her in the “gymnastics war” and fully adopted her approach to gymnastics were sometimes on the receiving end of harsh criticism, not only for their manner of walking and standing but also for how they held themselves or for external failings. She had a logical acuity which could see through most things. She was a great reformer and inspirer who was always curious and willing to try new ideas.

Elin Falk was awarded the Idun prize in 1916. She received the gymnastics association’s golden merit in 1922, and in 1932 she was awarded Illis Quorum of the 8th degree. However, it was not until after her death that her efforts were fully recognised and appreciated.

Elin Falk died in 1942 and is buried at Solna cemetery. 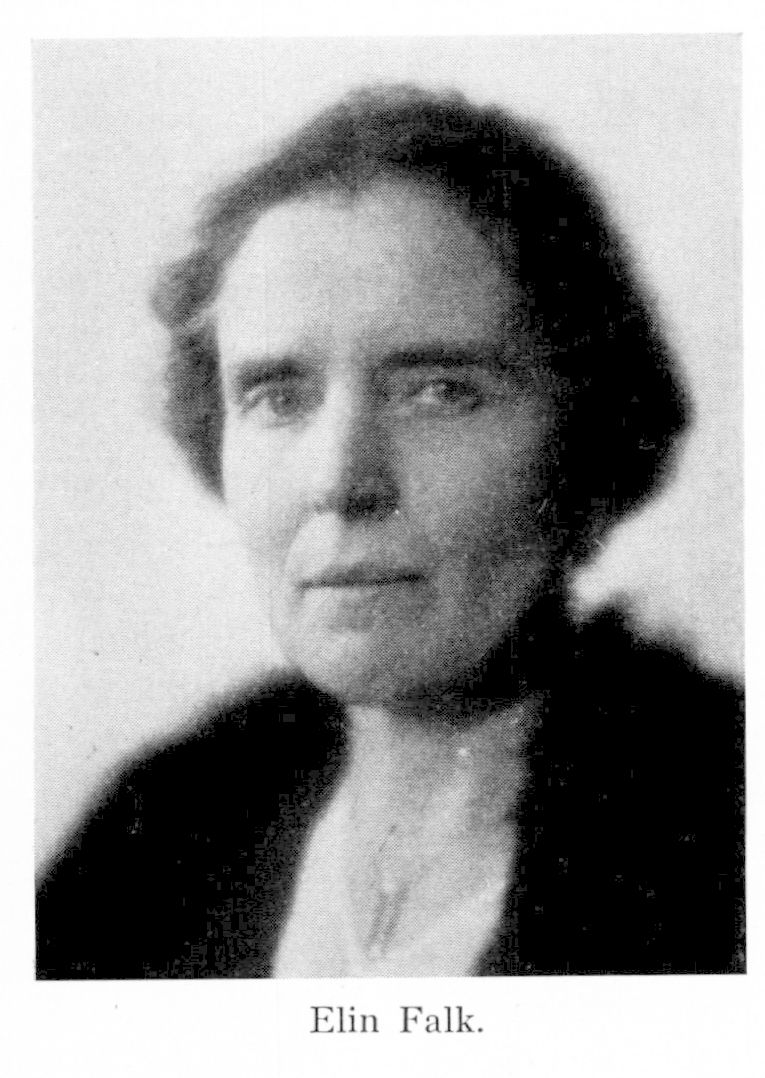