Elin Hök was one of the few blind women to have a career as an author. She was also a champion of blind women’s rights to professional training.

Elin Hök was born in Kläckeberga parish in 1889. Her family background is unclear, and her mother’s name was not recorded in the birth registry. Elin Hök initially grew up in Kläckeberga with Thea Emilia Hök, a widow and the manager of the post-office house, and her son. Later they moved to Kalmar.

Elin Hök went completely blind when she was 17 years old. She attended the Nisbeth school, a girls’ school in Kalmar, and then moved to Stockholm, in part so that she could train to become a teacher for the blind, and in part because she wanted to be closer to the artist Ivan Hoflund with whom she was in a relationship. Although they had a daughter together, she was given up for adoption. Elin Hök enrolled in the probationary class for blind teachers in 1907 and became qualified in December that same year. Her probationary essay was entitled ‘Blindpsykologiska studier’. However, she never put her qualification as a teacher into practise as Gustav Åstrand, the director of the Institute for the Blind, did not believe that the blind could teach and maintain discipline.

In 1913 Elin Hök began to work as a librarian at the library of De Blindas Förening (DBF) (the association for the blind). She became director of the library in 1933. Prior to this she had received a stipend from Crown Princess Margaret’s Arbetsnämnd för blinda (KMA) (employment board for the blind) in order to study librarianship for the blind in England and France.

Elin Hök published two books through Albert Bonnier publishers. The first book, Alvarens folk, from 1924, comprises short stories which are played out in the Öland environment. The book generated very favourable reviews. Her second book, also a collection of short stories, was called Majestätets grannar, and was published in 1929. The short stories are set in Gamla Stan where Elin Hök herself lived at the time.

It is apparent from interviews and articles that Elin Hök hated being dependent on others. She also hated receiving charity, which she viewed as evidence of poor societal organisation.

Elin Hök was already active in De Blindas Förening before the First World War. She successfully campaigned for the idea that blind girls could be trained to be office girls. This was facilitated by the introduction of typing as part of the courses at the Institute for the Blind. Elin Hök also led the way for blind people to learn stenography, which was made possible when a stenography machine was developed with Braille writing on it.

Elin Hök also tried to persuade industries to hire blind women. Her most successful project was convincing the Tobacco company boss to teach five blind women to roll cigarettes. They were all hired at the company factory in Stockholm at mutually agreed salaries.

When Elin Hök was in her 40s she married Klas Lundin, one of the board members at De Blindas Förening. The notes in her diary reveal that this was a very happy marriage. Her husband died in the 1940s. During the final years of her life Elin Hök also became deaf. Being a deaf-blind person meant that she led a very solitary life.

Elin Hök died in 1974. She is buried at the Norra cemetery in Solna. 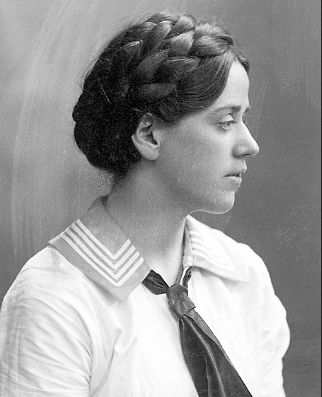