Elin Jacobsson and her classmate Anna Sandstedt were together the first women to qualify as building engineers in Sweden.

The technical college in Stockholm (now Konstfack) was a trade school offering training courses in among other things building techniques, machine techniques, design technique and industrial arts occupations. In 1859, a section for “female apprentices” was opened. After having qualified as a building draftsman at the female section of the technical college, Elin Jacobsson and Anna Sandstedt chose to transfer to the building section called Byggnadsyrkesskolan with its three-year training of overseers in the building branch. Along with the obligatory bricklayer apprenticeship, it demanded special permission from the college’s board, since they were women. Elin Jacobsson and Anna Sandstedt qualified in 1907, as noted in the magazine Idun. Information on their continuing professional lives is very scanty, apart for Elin Jacobsson who is said to have worked for a time as a building draftsman and building engineer at the city architect and engineering office.

Elin Jacobsson married Bror Gustaf Johansson in 1913 and was widowed in 1954. It is not known whether or not the couple had any children. Elin Jacobsson died in 1978, being then resident in the Hedvig Eleonora parish in Stockholm. She is buried in the Northern Cemetery in Solna. 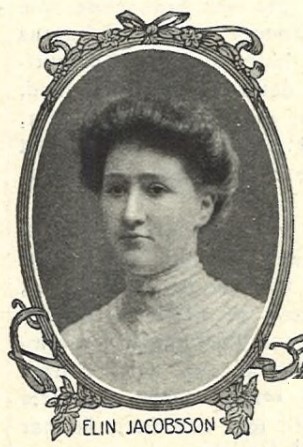