Elisabeth Christina von Linné was a botanist. She became famous for her discovery of a lightning-like phenomenon in orange flowers at dusk.

Elisabeth Christina von Linné was born in 1743 in Uppsala Cathedral parish. She was the family’s second child with the surname Linnaea, the feminine form of Linnaeus. The family’s surname was changed to von Linné when their father was ennobled in 1757 and introduced in 1761. Elisabeth Christina von Linné, like her three younger sisters, was educated at home by their father, unlike their older brother Carl who was educated at Uppsala University from the age of nine. Elisabeth Christina von Linné could both read and write. She grew up in a learned home with an inspiring father, a scholarly brother, tuition at home, learned guests and scientific discussions at the dinner table. This was probably how she was able to develop her interest in botany and the scientific approach of which she later gave proof despite her lack of formal education.

Elisabeth Christina von Linné was 19 years old when she discovered a light phenomenon in orange plants at dusk. With the support of her father Carl von Linné, she had her discovery published in 1762 in an essay for Kungliga Vetenskapsakademiens Handlingar. There she gave an account of how she had observed lightning-like flashes at dusk in the orange nasturtium Tropaeolum majus L. at the family farm in Hammarby, Uppsala. Thereafter she got others to observe the plant to confirm whether or not they also saw the flashes. In her essay, she reasoned about the possible causes of the lightning flashes. One of her theories was that it might be caused by the constitution of the eye itself.

The intention was for Elisabeth Christina von Linné to marry one of her father’s students, Daniel Solander, who was ten years older. He was one of her father’s favourites, lodged with the family and possibly considered the heir to Carl von Linné’s professorship. The wedding plans were shelved after Daniel Solander had travelled to England in 1760 on account of a conflict of interests between him and Carl von Linné, and contact between them was broken. Daniel Solander never returned to Sweden. He expressed great disappointment over the broken relationship with Elisabeth Christina von Linné and he remained unmarried.

She married Major Carl Fredrik Bergencrantz, 17 years her senior, in 1764 and became Elisabeth Christina Bergencrantz. She settled with him in Stockholm Näs parish in Uppland (now Kungsängen-Västra Ryd parish). In 1765 she had a son, Carl Fredrik, who only lived for two months, and a daughter, Sara Elisabeth, named after her maternal grandmother. Both children were born on the family farm Hammarby in Danmark parish near Uppsala.

The marriage soon turned out unhappy and Carl Fredrik Bergencrantz treated his wife so badly that she had to move back to her parents’ home with her little daughter. The year when she moved is not known, but in her parents’ will in 1776, in which they stipulated that they did not want their son-in-law to be an heir, they wrote that he had not enquired about his wife and daughter “for several years”. Her parents were worried about their daughter and her father wrote in a letter in 1776 that on account of her husband’s behaviour, she had “already from grief received such a blow to her health that her days have grown few and she must die and leave her daughter”.

After her father’s death in 1778, the family left their university accommodation in Uppsala and moved permanently to Hammarby. Elisabeth Christina von Linné died there at the age of 38 in 1782 from pneumonia. Her funeral was held in Danmark church and her body buried in the family tomb in Uppsala Cathedral, without her name being inscribed on the tombstone.

Elisabeth Christina von Linné did not leave any botanical works behind, after the essay on nasturtiums. A Dutch officer travelling through Sweden mentioned her reputation in Uppsala. After having met the younger Carl von Linné for a showing of the botanical garden, he wrote in a letter dated 1785, a long time after his visit, that the son was considered in Uppsala to be much less gifted than his father, but that there was a sister who had studied botany and had published some observations of which people spoke with praise.

Elisabeth Christina von Linné’s discovery was taken up in 1788 by Lars Christan Haggren who described lightning flashes in other species with orange flowers. Johann Wolfgang von Goethe quoted her in his work Zur Farbenlehre and minted the term “Das Elisabeth-Linnaeus-Phenomän”. Thore Magnus Fries, later professor of botany at Uppsala University, did research on the phenomenon in the mid-1800s, but without being able to explain the phenomenon. It was not until 1914 that the botanist Friedrick August Wilhelm Thomas explained the flashes as a hallucination. This was confirmed by Heinrick Remberg in 1950. The explanation has to do with the retina of the eye, in which the rods register black and white and the cones register colour. When the eye at dusk adapts to darkness with black and white vision with the rods and if it suddenly sees an orange colour that activates the cones, the reaction is so strong that the brain experiences it as a flash. Elisabeth Christina von Linné’s theory that it might depend on the eye itself was thus completely correct.

Her discovery has not only been followed up by scientists, it has also via Erasmus Darwin come to influence the pioneers in English romantic poetry, William Wordsworth and Samuel Taylor Coleridge. Her life and fate have been described in modern prose by Christina Wahldén and Ann Granhammer. Elisabeth Christina von Linné’s bridal gown can be seen at the Linnaeus Museum in Uppsala. 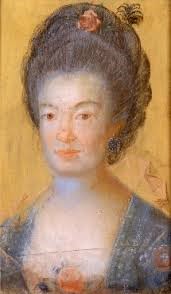