Elisabeth Olin was an opera singer, singer at the royal court, actress, musician and composer. She has been called Sweden’s first Swedish-born opera prima donna, and she was the first woman to be elected to the Royal Academy of Music in 1782.

Elisabeth Olin was the couple’s firstborn and she had five younger sisters and two younger brothers. Only Elisabeth and her sisters Margareta and Anna Christina reached adulthood. Elisabeth Olin made her debut when she was only six, on 20 May 1747 in the singspiel Syrinx eller Then uti Wassförwandlade Wattu-Nymphen, probably partly composed and put together by Lars Samuelsson Lalin. Her mother played the title role and little Elisabeth made a successful debut as Astrild. Elisabeth Olin probably received her musical education at home, but also took lessons from the organist in Storkyrkan, Ferdinand Zellbell junior, as well as from the Italian opera singer Giovanni Croce, employed as a singer at the Swedish court.

Elisabeth Olin married Gabriel Olin, court secretary and later assessor, when she was twenty, in 1760. He was twelve years older. They had two daughters, Elisabeth (Elise), and Hedvig Sofia, then two sons, Gabriel and Gustaf, and finally two more daughters, Carolina Charlotta and Gustava. Elise Olin followed in her mother’s footsteps and also became an acclaimed opera singer. Elisabeth Olin was widowed in 1794 when her husband Gabriel Olin died after a period of illness, at the age of 66.

Elisabeth Olin probably made her debut as a concert singer in the 1750s, but her name is not confirmed with certainty until a benefit concert for her father in 1769, conducted by court Kapellmeister Francesco Uttini in the Riddarhuset. At the same time, in 1769—1770, she participated in the so-called cavalier concerts under the leadership of Ferdinand Zellbell, and under the protection of the music patron Patrik Alströmer from Gothenburg. Elisabeth Olin was praised for her enchanting voice, her performance on the clavecin and her beauty. There is much to indicate that it was Elisabeth Olin who during the whole of the 1760s at various concerts was introduced with descriptions of a voice “that had won the audience’s appreciation” and “that had won the audience’s applause”. In 1768, Elisabeth Olin published a composition of her own, a song that was included in Gustaviade. Hjältedikt i tolv sånger by Erik Skjöldebrand. Swedish composers each contributed a composition to this collection, and the eighth was by Elisabeth Olin. At the funeral of King Adolf Fredrik on 30 August 1771 in Riddarholm church, she appeared as a soloist in the funeral cantata composed by Francesco Antonio Uttini.

Elisabeth Olin also performed in Uttini’s festive cantata for the coronation of Gustav III in Storkyrkan on 29 May 1772. The same year, she was contracted as court singer by Gustav III. This was not an uncontroversial decision. Elisabeth Olin was indeed considered to be the country’s foremost singer, but since many thought it morally dubious to appear in public on a stage, it was not certain that the wife of an official would agree to do so. This put her in an excellent position to negotiate, since she also counted as gentry through her marriage. She thus demanded a very high salary, and was granted 666 riksdaler and 32 shillings. “She values herself very expensively”, thought the king. However, he wanted to have the best talents when he founded the Swedish Opera, so Elisabeth Olin’s demands were conceded. No other woman in Sweden before her had ever had such a high salary, and no other artist in the country at her time ever received higher remuneration. She also had a private dressing room at the theatre, as the only actress or actor in Sweden to do so.

Elisabeth Olin sang the main female role in the new Swedish opera Thetis och Pelée, that had its première on 18 January 1773 for a packed-out Bollhuset. It inaugurated the Royal Opera, with music by Uttini and Fontenelle’s libretto that had been revised by the king assisted by Johan Wellander. The main male role was sung by Carl Stenborg. Elisabeth Olin’s daughter with the same name but only twelve years old sang the role of Love and her sister Anna Christina sang Echo. The opera was greeted with great enthusiasm and was performed about twenty times for full theatres.

For many years thereafter, Elisabeth Olin sang the main females roles in most of the works performed. She sang Galathea in Acis och Galathea by George Frederick Händel in 1773, Eurydice in Orpheus and Eurydice by Cristoph Willibald Gluck the same year, and later the main role in Silvie by Breton and Trial, Aline in Alina, Regina di Golconda by Uttini, Clytemnestra in Iphigenia in Aulis by Gluck, and many others. The male roles were mostly sung by Carl Stenborg. In 1774, she sang Mechtild in Birger Jarl och Mechtild with Carl Stenborg in the Rikssalen at the wedding of Duke Karl and Queen Hedvig Elisabet Charlotta. Elisabeth Olin has been called “Sweden’s first dramatic artist” and “the Swedish Mara” after the famous German opera singer Elisabeth Mara. In 1782, Elisabeth Olin was elected into the Royal Academy of Music, as the first woman, as member number 85.

In 1782, Elisabeth Olin resigned from the Opera at the age of 42, but she sang the role of Zulma in Cora och Alonso by Johan Gottlieb Naumann during the 1782—1783 season. The reason for her resignation is said to be that her daughter, Elise Olin, had started a relationship with Carl Stenborg, who had been Elisabeth Olin’s lover for a long time. Formally, Elisabeth Olin remained in her profession until 1803, but she only performed at a few guest appearances. Elisabeth Olin retained a life pension of 12,000 dalers and was the first person at the Royal Theatre to receive such an emolument.

Elisabeth Olin appeared as a soloist at the wedding of Gustav IV Adolf in 1797. On 27 February 1808, she made her last public appearance at a concert in Riddarhuset. Shortly before her death in 1828, Elisabeth Olin sang privately for the famous opera singer Angelica Catalani, who was impressed by her voice, that even at the age of 88 had a beautiful timbre.

Elisabeth Olin died, 88 years of age, on 26 March 1828 in Stockholm. She was buried in the catacombs of the German church in Stockholm. 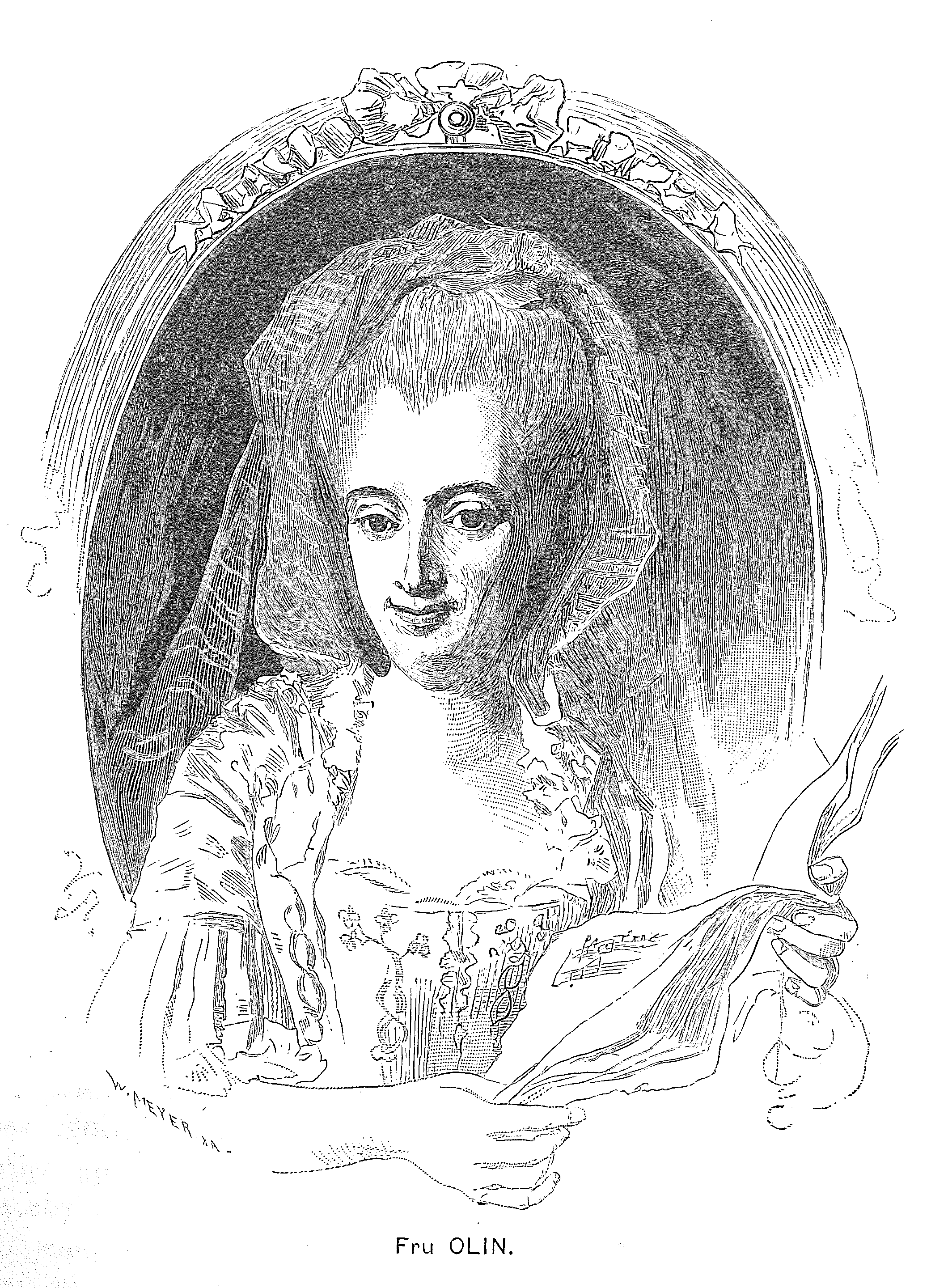