Elisabeth Östman was a domestic sciences instructor who ran Elisabeth Östmans Husmodersskola (housekeepers’ school) in Stockholm. She also wrote a book entitled Iduns kokbok and she was politically active.

Elisabeth Östman was born in Skokloster on 3 August 1869. Her father, Lars Johan Östman, was the pastor for Skokloster and Funbo parishes. Her mother, Anna Östman, was her husband’s second wife. Elisabeth Östman was brought up with several half-siblings. She also had an older sister, Anna Beata Katarina, who died at the age of six, as well as two younger brothers, one of whom did not survive into adulthood.

Elisabeth Östman completed her schooling in Uppsala and then began to attend Fackskolan för Huslig ekonomi (vocational school for domestic sciences) in the same city. In 1899 she gained her school-cookery teaching qualifications and after graduating she was employed at the same institution as a domestic sciences instructor. She remained in post until 1902 when she set up Elisabeth Östmans Husmoderskurs, later renamed Elisabeth Östmans Husmodersskola. She placed great importance in her own school on ensuring that her pupils were instructed in the use of gas-, electric-, and wood-burning stoves. She wanted them to be well prepared for a world that was undergoing change.

Initially the school was located at Jakobsbergsgatan 34. In addition to her teaching Elisabeth Östman also spent time writing. She produced a number of articles on domestic matters for newspapers and journals. In 1908 she became the editor of the Idun journal’s very popular features called “Hjälpreda för hemmet” and “Iduns köksalmanacka” which presented menu suggestions on a daily basis. She also served as a consultant for Stockholms Gasverk, later known as Stockholms Elektricitetsverk, for over fifteen years. As such she was involved in the development and testing of gas cookers, and later electrical cookers. She also wrote instruction manuals for gas cookers made by Husqvarna, Norrahammar, and Näfveqvarn.

In the autumn of 1911 the newly-released Iduns kokbok, written by Elisabeth Östman, was advertised. The book was described as “the bourgeois home’s cookbook par preference” and contained 1,071 recipes. It was illustrated with colour plates which detailed how to carve, the various cuts of meat, fowl, fish, mushrooms, and vegetables. The cookbook was said to be “the most modern in terms of content and equipment”. Each recipe had been tested at Elisabeth Östmans Husmodersskola. Iduns kokbok also included suggestions for table-settings, menus, and napkin-folding, all of which was photographically illustrated. The cookbook was primarily intended for the bourgeois housewife, as an aide in her duties as housekeeper and hostess.

A lot happened in Elisabeth Östman’s life during a three-month spell of the following year. In March 1912 she became engaged to Kristian Sundstrand, construction engineer at Stockholms Elektricitetsverk, and on 15 June that year the couple were married at Ersta chapel in Stockholm. The year after that the wealthy couple moved into a newly-constructed building on Klarabergsgatan. There, up in the attic which was furnished with a new and roomy kitchen, Elisabeth Östman continued running her school for housekeepers.

In 1914 Elisabeth Östman advertised in Idun that she intended to offer courses in preparing vegetarian food. She sent one of her instructors to Germany in order to study modern vegetarian food preparation. Elisabeth Östman worked out nutritional requirements, namely recommended all-round, nutritious diets, for Stockholm city hospital. Later she undertook similar work for the hospitals within Malmöhus county council area. She also authored a large hospital cookbook.

Elisabeth Östman was also politically active. In March 1919 the municipal election within Stockholm’s first constituency was held according to the new principles of general and equal suffrage. Elisabeth Östman stood as a candidate for the right-wing party and was duly elected on a two-year mandate. She was one of fifteen women who were elected into Stockholm town council. From 1923–1927 she served on the town council’s slaughterers’ and market-hall board, the homes for the elderly board, and Stockholm city hospital board.

In the early 1920s Elisabeth Östman’s husband began to suffer ill health and died in January 1921. Despite this she tirelessly carried on working at the housekeepers’ school and as a politician. Elisabeth Östman served as a consultant on cooking facilities at many hospital construction and refurbishment sites and she was often hired to advise architects. Her housekeepers’ school was so well-reputed that at a major domestic exhibition held in Italy in 1927, a school kitchen was constructed according to her specifications. This caused a major stir.

Elisabeth Östman died on 3 March 1933 following a period of illness. She was 64. Her remains lie at Norra begravningsplatsen (the Northern cemetery) in Solna under a tombstone engraved “Laura Elisabet Sundstrand”. After her death the school carried on operating under the same name and at the same address. 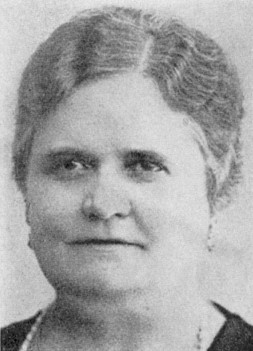