Elise Hwasser was Sweden’s greatest stage actress in the years between the 1860s and the early 1880s. It was her portrayals of Henrik Ibsen’s lead female characters that popularised the so-called ‘New Woman’ character roles.

Elise Hwasser was born in Stockholm in 1831. She was the daughter of a poor customs guard, and apparently contributed to her family’s finances by selling paper flowers. In 1849 she successfully applied to the Kongl. Theaterns elevskola (royal dramatic theatre school) and from 1850 onwards she became one of the theatre’s actresses. She became lead actress in 1853 and ten years later she was given a contract for life. In 1854 she was briefly engaged to a wholesale merchant but the thought of having to give up her profession in order to marry was too much for her. Elise Hwasser opted to forsake her fiancé and continue working at the theatre, against the advice of her mother and friends.

In her younger years Elise Hwasser was a great admirer of Jenny Lind and apparently she tried to imitate the latter in her stage movements. She quickly gained popularity and was often given roles within the genre of the ingénue. She emphasised the complex aspects of the ingénue, as in Charlotte Birch-Pfeiffer’s dramatization of Charlotte Brontë’s Jane Eyre, which became her breakthrough character portrayal. She impressed the audience at an 1858 performance of Syrsan, adapted from George Sand’s novel La petite Fadette and dramatized by Birch-Pfeiffer, with the passionate dance she performed with her own moonlit shadow. She also played young girls in refined dramas such as Shakespeare’s Ophelia in Hamlet, in 1853, Desdemona in Othello, and Juliet in Romeo and Juliet, as well as the title roles in Friedrich von Schiller’s Maria Stuart and in Wallenstein.

Elise Hwasser married the court chamberlain Daniel Hwasser in 1858. The following year her husband was appointed the manager of the Kongl. Theater, presumably through the intervention of the Crown Prince (later King Karl XV), thus putting him in charge of the repertoire. Daniel Hwasser was a great comedian, a good tenor, and a very sociable person who had remained close to the king ever since their student days together in Uppsala. Following her marriage, Elise Hwasser also became part of the royal couple’s unofficial retinue, and this included becoming a part of the king’s bowling group known as ‘Enkan Bloms bekanta’. Sometimes she could be seen dressed in a sailor’s costume, openly smoking cigars, being provocatively emancipated in her dress and behaviour. Elise Hwasser’s marriage to Daniel Hwasser and her proximity to the king facilitated her unusual upward social trajectory. Her husband’s role within the theatre presumably strengthened her position there. Further, she belonged to the sparse number of bourgeois women who were able to continue with their professions despite being married. One of her own daughters, Anna-Lisa Hwasser-Engelbrecht, also became an actress.

Elise Hwasser’s career was at its peak during the 1860s and 1870s. She began to play heavy-weight dramatic roles such as Shakespeare’s Hermione in Winter's tale, in 1871. She was keen to play domineering and complex female roles such as Sigrid in Frans Hedberg’s Bröllopet på Ulfåsa in 1865, and Cleopatra in Antony and Cleopatra, in 1881. She was the first actor to be awarded the Litteris et Artibus medal in 1864, later followed by the In sui memoriam medal, and finally the Swedish Academy’s gold medal in 1881. She played the part of Ester Larsson in 1874 in Anne-Charlotte Leffler’s debut play Skådespelerskan, “offensively well”, as remarkably expressed by Erik af Edholm, the first director of the Kongl. Theater. It was her portrayal of the professional woman presented with the dilemma of giving up her career for the sake of love, whilst also adopting the bourgeois feminine ideal, that definitely placed what at that time was viewed as a controversial stage role of the ‘New Woman’ on the theatrical map. Elise Hwasser would continue to develop this dramatic female character type during the latter part of her career, especially within the framework of Henrik Ibsen’s plays.

Elise Hwasser is seen as a major contributing factor in Bjørnstjerne Bjørnson’s breakthrough into Swedish theatre with plays including De nygifta, from 1866, Mellan drabbningarna, from 1867, and when she played the title role in Maria Stuart i Skottland in 1868. Above all it was her performances in Henrik Ibsen plays which immortalised her. Her first interpretation of an Ibsen character was the minor role of Selma Bratsberg in De ungas förbund in 1869. She was a hit in her portrayal of the proud and suffering warrior-maiden Hjördis in Härmännen på Helgeland in 1876. Aftonbladet described her interpretation of Hjördis as “a stern and tensile statue, carved from Nordic granite”.

Elise Hwasser was an admirer of Ibsen and the feeling was mutual. In 1877 she played the title role in Fru Inger till Östråt, and in 1878 she played the ‘New Woman’ Lona Hessel in Samhällets pelare, which is seen as the playwright’s first use of drama to debate social issues. This success was followed up by Elise Hwasser’s 1880 portrayal of Nora in Ett dockhem. She was the first Swede to play this role, specifically at Ibsen’s request. Elise Hwasser was 49 years old at the time and was criticised for being too old for the part. It was said that she over-compensated for her age by skipping and humming in the first act of the play in an exaggerated attempt at portraying a young Nora, which only succeeded in emphasising the actress’s real age. Nevertheless, her transformation into the determined and mature Nora of the third act was masterful. She followed up this success with her portrayal of Fru Alving in Gengångare, in 1883, which was well-received despite its – at that time – controversial theme. Although she had been pre-selected to portray Gina Ekdahl in the production of Vildanden, she was outmanoeuvred by the director, August Lindberg, who presumably wanted to control how the role was portrayed. As was the norm for leading actors in that era Elise Hwasser herself determined how her parts were analysed and portrayed. Lindberg sought to change this, and other aspects, by tightening the director’s power over the staging and actors’ character interpretations.

Elise Hwasser’s early career mainly involved playing the ingénue. Her acting style reflected an idealised realism with melodramatic performances, usually at the forefront of the stage. According to Ingeborg Nordin Hennel Elise Hwasser was not afraid to make use of striking movements, involving “falling to her knees, stamping [her feet] and throwing either tempestuous or tenderly appealing looks”. During this phase of her career she was sometimes criticised for her overpowering portrayals and for speaking too loudly in a manner which bordered on shouting. Although her successes tended to involve historical dramas and tragedies, she was also a hit in comedies such as Ett glas vatten, by Eugéne Scribe, from 1860, in which she played Queen Anne, as well as her portrayal of the Baroness de Mantes in Alfred de Musset’s Osvuret är bäst, from 1886. Her charisma exuded a sense of pride and self-worth, which made her first-choice to portray regal roles, particularly when these roles included rebellious and domineering elements.

As contemporary theatre emerged it demanded a greater realism and a more realistic acting style which many actors found difficult to adopt. Elise Hwasser, however, successfully moved on from the late-romantic melodramatic to a more realistic style which included more nuanced character interpretations. This was met with great public and critical admiration. She never completely ceased displaying what were considered typical feminine characteristics, such as in her role portrayals of Lady Macbeth, where she toned down the demonic aspects and emphasised Lady Macbeth’s role as a devoted wife. In another example, Elise Hwasser chose to act the controversial final scene of Ett dockhem, where Nora leaves her home and family, whilst sighing deeply and covering her face with a handkerchief. When playing Mrs Alving in Gengångare she emphasised the aspects of a suffering wife and a mother who retained self-control of her emotions. She thus softened the provocative elements of these roles and instead prioritised their so-called feminine sides thus succeeding in making these ‘new’ female types more accessible and more human to contemporary audiences.

Following Daniel Hwasser’s death in 1871 it became increasingly difficult for Elise Hwasser to retain her position of power at the theatre. Criticism of her increasingly out-dated acting style only grew during the 1880s, particularly with regard to her increasingly aged appearance. As noted in the press, she was battling the theatre-management, making her final working years bitter ones. Her great dream of becoming a director was never realised. When she asked to direct Henri de Bornier’s play Rolands dotter Erik af Edholm, the theatre manager, knocked her back. During the 1880s it was viewed as unseemly, even revolutionary, for a woman to take on a managerial role. During the final years of the 1880s Elise Hwasser’s acting roles shrank ever further in number, also partly due to her poor state of health. She enjoyed great success in 1886 as the uncompromising character of Thora Edlin in Alfhild Agrell’s Ensam. Further, her interpretation of Lady Macbeth in Shakespeare’s Macbeth, opposite the Italian star actor Ernesto Rossi during his 1886 visiting stint in Sweden, was impressive.

When Dramaten was transformed from being a royal theatre into one that was run by an actors’ association in 1888 Elise Hwasser gave up acting. She spent the remaining years of her life in Fiskebäckskil on Sweden’s west coast. She named her house Vestråt – an allusion to the title role in Ibsen’s Fru Inger till Östråt, which had been her favourite acting role.

Elise Hwasser died in 1894. She is buried beside her husband and daughter at the Norra cemetery in Solna. 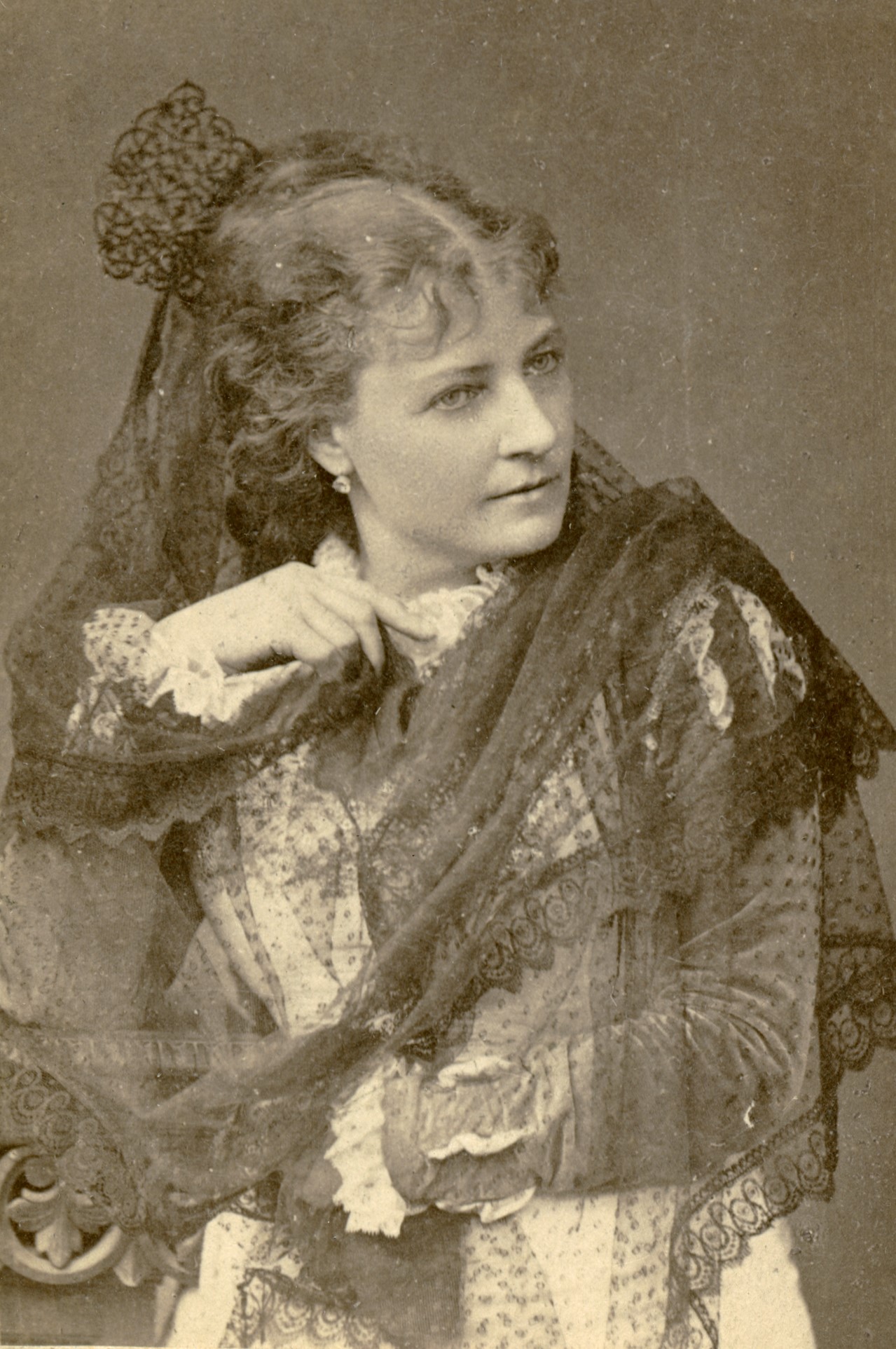