Ella Billing was a women’s suffrage activist who engaged with issues of social welfare.

Ella Billing was born in Färlöv, Scania in 1869. Her parents were a crofter named Nils Wulff and his wife Johanna Karlsdotter. Little is known of Ella Billing’s upbringing but her home background was most likely quite an impoverished one. The family numbered several children.

For a time Ella Billing worked as a junior school teacher at Kristianstad’s junior school. Later Ella Billing also became a member of that town’s poor relief board where she particularly took an interest in the young and received a lot of recognition for her devotion to her work.

It was as a member of the local Kristianstad branch of Föreningen för kvinnans politiska rösträtt (FKPR, national association for women’s suffrage) that Ella Billing began to campaign for women’s suffrage. Ella Billing married Johan Albert Billing on 16 August 1897 and the they had two children. When she and her husband decided to move to Stockholm in 1912 the Kristianstad FKPR held a large farewell party for the couple.

After moving to the capital Ella Billing continued her activism as a suffragette. She travelled throughout Sweden, agitating on behalf of women’s suffrage, gathering signatures and setting up local branches of the association. She also wrote for the Rösträtt för kvinnor magazine. She was described by her contemporaries as both a goal-oriented and energetic woman. Ella Billing made a much-noted visit to the suffragette groups in northern Sweden in 1913. She produced an account of her travels that was published in Rösträtt för kvinnor where she wrote warmly of the Luleå branch and their leader, Märta Bucht. When making public appearances during the First World War Ella Billing included world events in her talks entitled “När fosterlandet kallar”, and she also lectured on the war-time duties and roles of women. Ella Billing also became the director of Kungsholmen municipal aid agency.

In 1915 Ella Billing was elected onto Stockholm city council on which she served for a brief time. She became the director of Nordiska Kompaniet’s (department store) “intressekontor”, an office which managed the employees’ finances. Ella Billing held many responsible positions and she also served as chair of the Stockholm section of Svenska Kvinnors Medborgarförbund.

Ella Billing died in Stockholm on 22 December 1921. She is buried at Östra Begravningsplatsen (the Eastern cemetery) in Kristianstad. 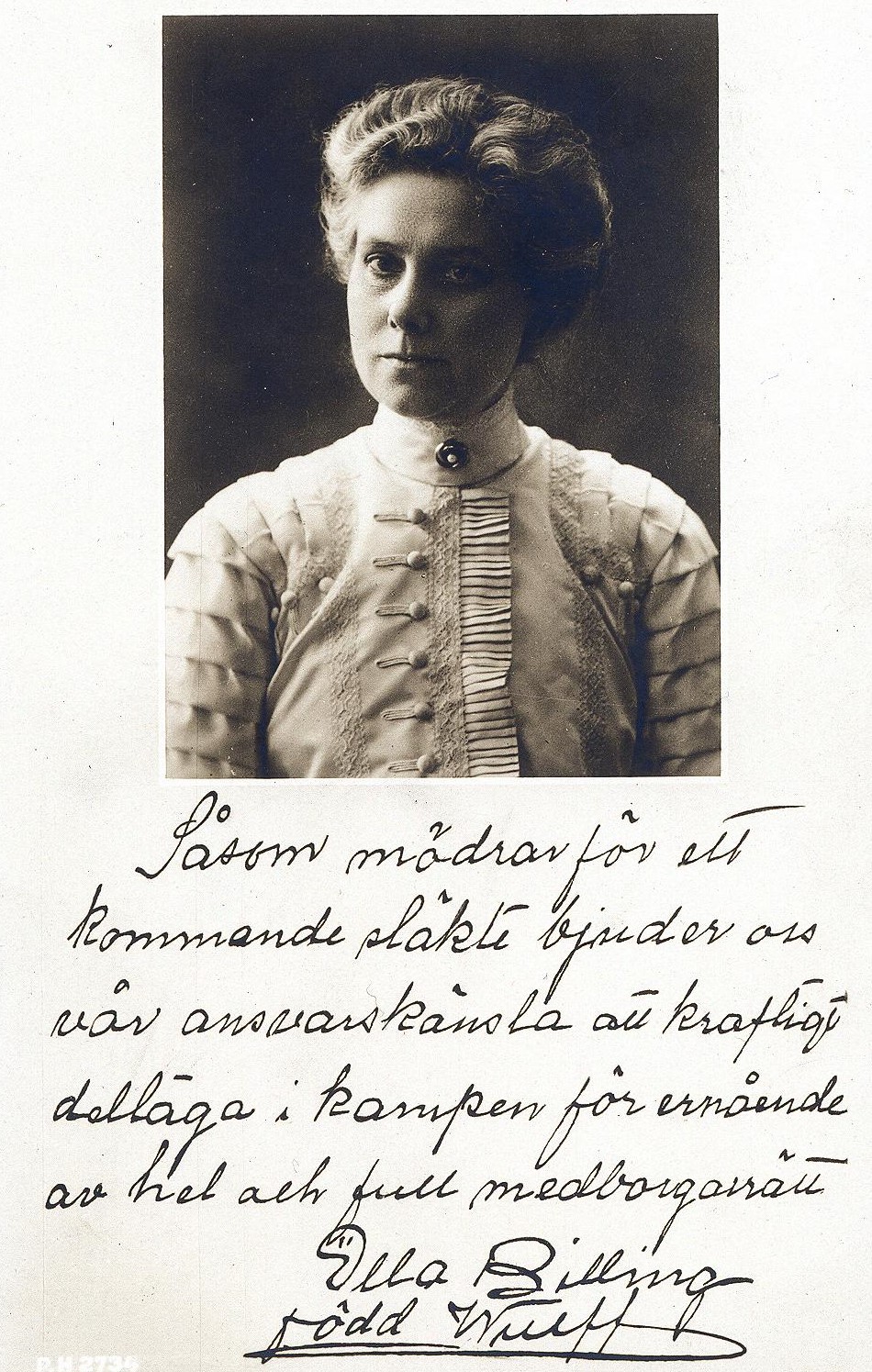 Portrait of Ella Billing on a suffrage postcard, bearing her signature. Translation: “As mothers of a coming generation, our sense of responsibility implores us to join in the struggle for civil rights”. Photographer and year unknown (KvinnSam, Gothenburg University Library)