Ella Odstedt was one of the most prominent Swedish collectors of Swedish folk beliefs. In a period spanning the 1920s through the 1960s she interviewed hundreds of individuals across Norrland about ancient beliefs, customs, and poems.

Ella Odstedt was born in 1934 in Arnäs parish, not far from Örnsköldsvik. She was the second eldest of stone-mason Johan Ohlsson’s and his wife Gustava Blom’s six children. She spent large parts of her childhood and youth at her parents’ home in Arnäs. Her paternal grandmother, Katarina Ohlsson, would often tell stories and served as a source of inspiration for Ella Odstedt: “Many times I would be sat, half frozen in fear, listening to her stories about ‘vitera’, about otherworldly things and about all kinds of goblins” Ella Odstedt would later reminisce. As a young child she began to write out fairy tales, sayings, and customs herself, sometimes according to her grandmother’s stories. Her written recording efforts really took off in 1917 following her contact with the Nordic museum (Nordiska museet) and Edvard Hammarstedt, one of the most eminent folklore experts of the time. He came to serve as Ella Odstedt’s mentor as she began to record information from the Ångermanland village of Arnäs as well as other areas of Norrland.

Ella Odstedt’s work as a collector resulted in 1925 in her becoming associated with the Uppsala Landsmåls- och folkminnesarkiv (local language and folklore archive), now known as Dialekt- och folkminnesarkivet (dialects and folklore archive). Two years later she became employed as an archival assistant. She remained at the archive until she retired. Her work remit included taking charge of and instructing the archive’s information gatherers. Further, she compiled around thirty questionnaires, primarily dealing with folklore material. In addition she herself recorded a lot of information in Norrland, as well as in areas further south. Her material largely comprised local poems, beliefs, and customs, but she was also interested in material culture such as the condition of buildings, local costumes and textiles. She also noted regional dialects, including that of Arnäs. Her notes total about 60,000 pages.

Ella Odstedt’s early major articles were mainly based on her own fieldwork. “Sagor från Ångermanland” was published in 1931 in Svenska landsmål och svenskt folkliv, whilst “Naturväsen i Ångermanländsk folktro” was published in 1933 in Folkminnen och folktankar. Her first monograph, Varulven i svensk folktradition, was released in 1943. The book contains stories about people who could transform themselves into wolf-like or bear-like creatures and is based on both her notes as well as older literary source material. In the main she deals with three belief-sets: the belief in self-transformation, the belief in transformation due to destruction, and transformation caused by circumstances of birth. At the time her book was compared to a doctoral thesis: it was very favourably reviewed by the nation’s leading folklorists and was certainly a contributing factor in her election into the Kungl. Gustav Adolfs Akademien för svensk folkkultur (The Royal Gustavus Adolphus Academy for Swedish Folk Culture, GAA) as well as her award of an honorary doctorate at Uppsala university. Ella Odstedt’s second monograph, Folkdräkter i övre Dalarna, from 1953, was similarly favourably received. In 553 pages she thoroughly describes the textile and clothing of övre Dalarna (upper Dalarna) during the first half of the nineteenth century. Again the book is heavily based on her own notes.

Ella Odstedt’s notes are still regularly referred to and serve as priceless sources for understanding the folk culture of ancient times. One example of the continued interest in Ella Odstedt’s notes is the 2004 book Norrlänsk folktradition, published by the GAA. The collection includes 1,500 of her notes, selected and annotated by Bengt af Klintberg.

Ella Odstedt’s work is still treated as a work of research. In 2012, nearly 70 years after Varulven i svensk folktradition was first published, the book was re-released in a new edition. 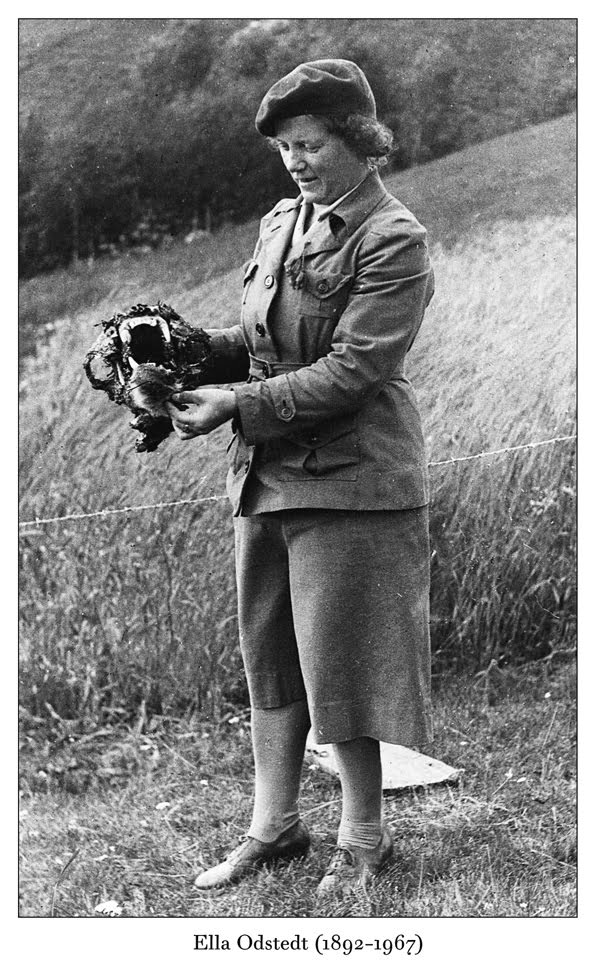