Ellen Hilberth was a missionary who worked for the Baptist Örebromissionen (ÖM) organisation, which sent her out to Central Africa. She made meaningful contributions to the local population there, particularly through the medical and healthcare provisions for which she held overall responsibility.

Ellen Hilberth was born in 1898. She grew up in Nysund, Degerfors municipality, where her parents lived on her maternal grandparents’ farm and engaged in small-scale farming. Her father, Anders Emil Larsson, had spent seven years in America before returning to his home district in 1897. He married her mother that same year. Ellen Hilberth lost her mother, Maria Lovisa née Andersson, in 1906 when she died following a period of illness. This left her father in charge of her and her twin sisters, who were two years her junior. The family had the help of maids and housekeepers and their home was characterised by a pious devotion to the Swedish church. The local area experienced a period of spiritual revivalism during the 1911–1912 period, following the visit of an Örebromissionen evangelist, which led her father to take up free church activism. Ellen Hilberth’s memories of this, and other things, can be found in a chapter of a book entitled Tack mor och far!, published by ÖM in 1950.

As part of the local wave of revivalism Ellen Hilberth was baptised and became a member of the local Baptist congregation. In 1922 she made her way to ÖM’s Bible school in Örebro, after which she spent a couple of years serving as an active evangelist. She also trained as a nurse in Örebro and then applied to Örebro missionary school in 1926, with the intentions of heading out to work in Africa. She undertook language studies in France, Switzerland, and Britain, as well as studies in tropical medicine in Brussels and Brazzaville, with the result that in 1930 she arrived well-prepared to work with ÖM at Oubangui-Chari, a colony in French Equatorial Africa (now the Central African Republic; French Equatorial Africa at that time encompassed Gabon, the Congo, and Chad). There she met John Hilberth who had lost his wife the previous year as a consequence of post-natal complications. They married in December 1931 and became an influential missionary couple during what would be a tumultuous time.

Ellen Hilberth was a pioneer and a strong driving force within missionary medical care provision. Her engagement also included writing countless notes, letters, magazine articles, and a book chapter. In 1944 non-French doctors gained the permission to work within the colony and although Ellen Hilberth repeatedly called for ÖM to send out a missionary doctor it never came to pass until after her death. In addition to her clinical work Ellen Hilberth also taught about illnesses and how to combat them. Further, she collected medical plants on behalf of the Gothenburg-based Hässle medical company and she was in constant contact with Professor Finn Sandberg at Stockholms Farmaceutiska Institut (institute of pharmaceutics). Her intellectual acumen, her administrative skills, and her enormous work ethic led her to also take on roles at the missionary stations and on the pastoral training programme her husband John Hilberth had set up in 1953 in the town of Carnot. She was not afraid to throw herself into new and challenging issues. At an ecumenical preparatory course for missionaries, held in Holsbybrunn in 1957, she introduced a discussion on the theme of “Does the zeal of the missionary turn him into a tyrant?”. Later research has shown that she also played a significant role, albeit in the background, in the African church’s independence movement, within which her husband was highly influential.

Ellen Hilberth’s thirst for knowledge led her to undertake cultural studies with reference to religion, illnesses, and health. During a visit to Sweden in 1957 she was awarded her Bachelor’s degree at Uppsala university in history of religions and ethnographical studies. Unfortunately she was abruptly forced to end her continued studies. During an Easter visit to some villages in 1961 she fell ill, causing her to break off her travels. Although the Hilberths returned to the central town of Berberati Ellen Hilberth’s life could not be saved and she died of myocarditis on 2 April 1961. She was buried at the cemetery in Bania, a place where the couple had previously lived. She left behind a completed study of Gbaya language personal names and their meanings as well as extensive notes on medical treatments, obstetrics, and natural medicines. Her husband John edited this material for posthumous publication in 1968 as a book entitled Contribution à l’Ethnographie des Gbaya. 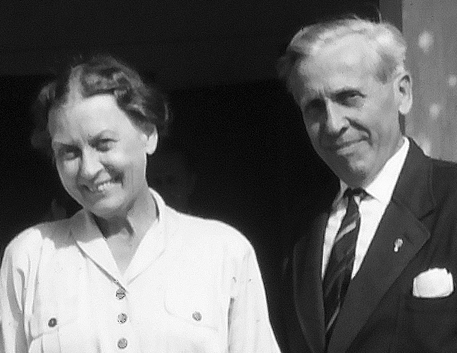