Ellen Dahlberg was one of the first female photojournalists in Sweden. She was active from the 1940s onwards.

Ellen Dahlberg was born Ellen Tradelius in Berlin in 1921. She came to Sweden in 1938 as a Jewish refugee, shortly after her sister had also fled to Sweden. Their parents, Alice and Siegfried Tradelius remained in Germany where they both ran a family-run textile business. Shortly after Ellen Dahlberg’s flight to Sweden both of her parents were imprisoned by the Nazis. Her mother died in captivity whilst her father, who was permitted to attend her mother’s funeral, managed to escape to the Netherlands and from there made his way to Sweden.

Ellen Dahlberg learned the basics of professional photography at the Riwkin-Brick studio. She also took evening classes to further her photography skills and she began to do photojournalism. Ellen Dahlberg would take her pictures in the evenings, sometimes at the harbour in Gamla stan (the old town of Stockholm) and she managed to sell some of her images. Although she received 25 Swedish kronor for her first sold picture it was never published. However, Carl-Adam Nycop, a journalist and editor, began commissioning images which did get published. Ellen Dahlberg often worked for him over the ensuing years. Her first major series of photojournalistic images was undertaken during a journey she made in Nils Holgersson’s footsteps.

Ellen Dahlberg married the journalist Nils Dahlberg in 1940. In the early 1940s they jointly produced journalistic reports which they sold to Swedish journals such as SE, Folket i Bild, the weekly Vi, the SSU journal Frihet, Socialdemokraten, Statanställd as well as other trades and weekly publications. In 1943 the couple produced several reports for Se which were typical of their usual working style: “Slummen i folkhemmet” (Slums within the welfare state) (nr.8), “Norrlands fattigdom jagas på flykten” (Poverty in Norrland on the run) (nr.14), “Vad får man för 1:50?”(What can you get for 1.50 kronor?) (nr.15) and “Sverige börjar bli rustat till tänderna!” (Sweden is becoming armed to the teeth!) (nr.21). These articles and the accompanying images testified to their social activism and sought to reveal social wrongs and failings.

Ellen Dahlberg’s archive testifies to the many different themes she covered. She also sold her images to foreign publications, such as National Geographic. Despite being often asked to do fashion photography and to work for weeklies such as Vecko-Revyn Ellen Dahlberg turned them down.

Ellen and Nils Dahlberg went on two photojournalistic trips to South America, in 1944-1945 and in 1947. They began their first trip from occupied Norway and their first stop was Buenos Aires in Argentina. During the sea-crossing Ellen Dahlberg taught herself Spanish so that she could better communicate with any people she met. The couple also visited the Caribbean and North America during this trip. Crossing the Atlantic in 1944, as a Jewish German refugee, was a precarious undertaking, but their journey went smoothly. Ellen Dahlberg generated a lot of attention in South America in her role as a female photographer. She and her husband travelled throughout the countryside, far from those places where camera film could be acquired or where they could fix her camera should it get damaged. Thus, for safety’s sake Ellen Dahlberg travelled with two Rolleiflex cameras. She covered the South American sugar and coffee plantations, cotton plantations, rubber-production and the working environment. Her reports from South America were sold to North America and the rest of the world through an agent in New York. The second trip to South America was undertaken as an official press journey with SAS. During that trip – which lasted three months – the couple were tasked with taking pictures on behalf of various Swedish companies.

Ellen Dahlberg also travelled in Turkey, documenting daily life there. She also travelled to Morocco and produced a report on worksites in Marrakesh. Ellen Dahlberg’s reports, even when she was taking pictures in Sweden, often focused on the workers.

In 1949 Ellen Dahlberg was asked if she wanted to be part of the Unga fotografer exhibition along with ten other photographers, including Rune Hassner, Tore Johnson, Lennart Nilsson, Sven Gillsäter and Hans Malmberg. Only two women were involved in the exhibition, namely Ellen Dahlbeg and Astrid Bergman Sucksdorff. All of the participating photographers had been abroad and travelled after the end of the Second World War and their desire to experiment meant that a radical new element was introduced into Swedish photography. Martin Strömberg at Stockholms-Tidningen wrote how “they formed a heterogeneous group which was stimulatingly uneven. These eleven have one thing in common – a fresh joy in discovery and freedom from convention and limitations”. Ellen Dahlberg supplied nine images for the exhibition. One of her images, Karusellen, was published as part of the Foto journal article on the exhibition that same year. This image is of the lights from a moving a carousel surrounded by darkness. The exhibition garnered overwhelmingly positive reviews. Ellen Dahlberg’s photograph entitled Manhattan cocktail also gained attention, both positive and negative. The picture, taken using long exposure, is of the city lights moving at night. It is perhaps the most often published Ellen Dahlberg photograph. The Unga fotografer exhibition was, in itself, partly a form of protest against the unwritten rules which dominated photography at the time, such as the requirement that an image had to comprise the entire grey scale between white and black.

Ellen Dahlberg held her first and only solo exhibition in 1987, entilted Barn jag mött – en tidsspegel 1940–1985, at Kulturhuset in Stockholm. The photographs, all taken for Ellen Dahlberg’s many photojournalism commissions, came from her archive. The exhibition aimed to reveal the changes which had occurred in society from the 1940s up to the mid-1980s within the spheres of social welfare, healthcare, schooling, family life, working life, and more. “Today’s city kids are ready to pay for that which rural kids of yesteryear were forced to do” was one of the press releases. The journal Tiden had an eight-page photography report in which all the images and words were by Ellen Dahlberg. She had begun to write the texts for all her reports following her husband’s death in 1981.

In 2017 an exhibition was held on three pioneering women: Alma Haag, Ellen Dahlberg, and Ragnhild Haarstad. All of these women had been early photojournalists in Sweden. The exhibition was called Upphovsmannen är en kvinna: Alma Haag, Ellen Dahlberg och Ragnhild Haarstad and was first held in Marabouparken in Sundbyberg in 2017, and then, the following year, at the Museum of Women’s History in Umeå and at the Kulturen in Lund. The Museum of Women’s History also published an exhibition catalogue bearing the same title.

Ellen Dahlberg, along with Ragnhild Haarstad and Ulla Lemberg, were also the subject of a documentary film called Upphovsmannen var en kvinna by Wanda Bendjelloul, Arianna Bommarco Catomeris and Katarina Hellberg, which was shown on SVT in 2017. The film describes how women have been involved in professional photography and have fought for equal recognition to their male counterparts for over a century. Ellen Dahlberg’s archive of around 50,000 images was deposited with the IMS Bildbyrå (known as NordicPhotos since 2019) in September 2000.

Ellen Dahlberg spent all her life working as a freelance photographer, never joining any one particular publication. She never published a book of her own but was often commissioned to illustrate other people’s books. She was active until she decided to retire in 1989. 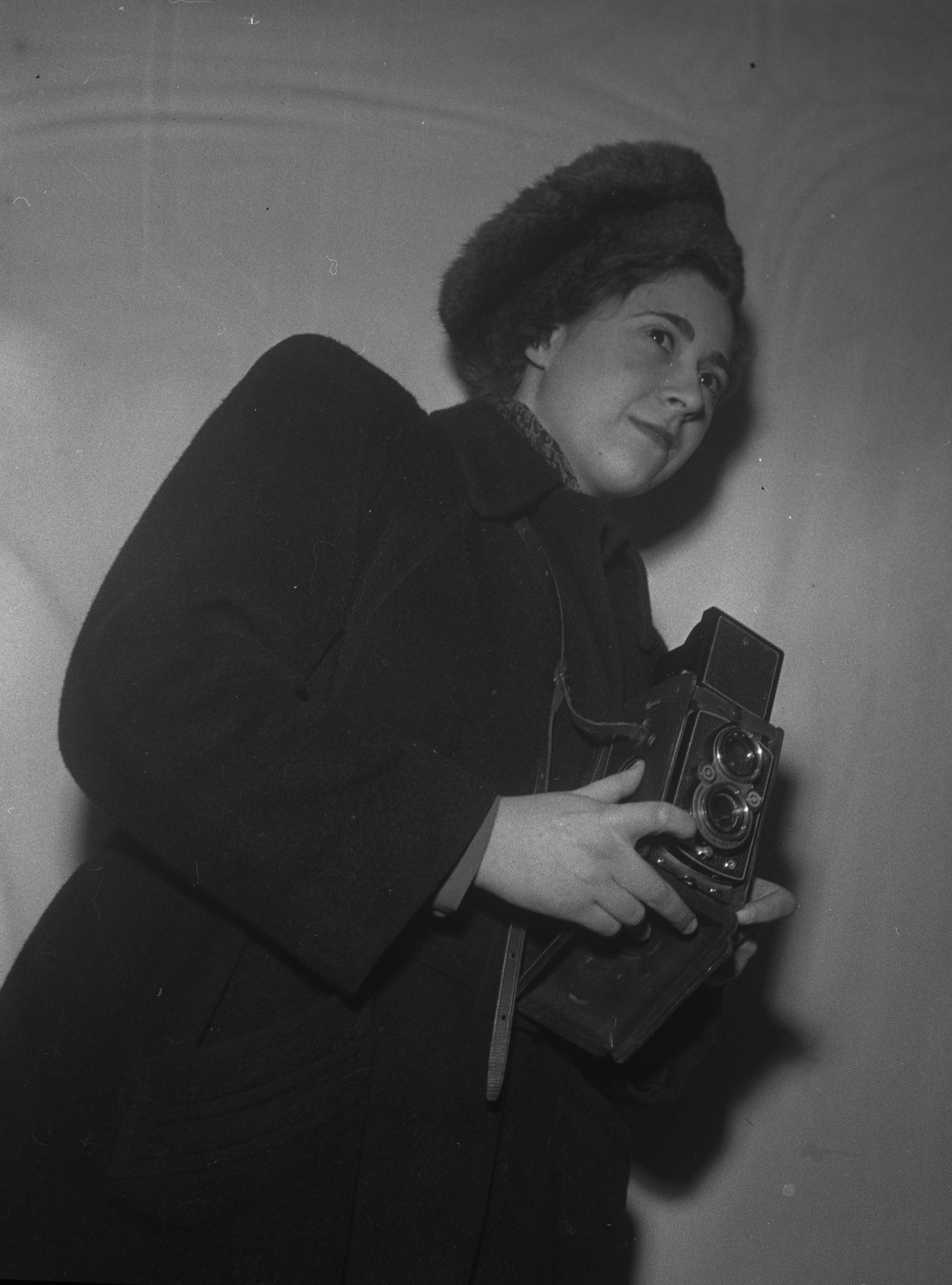