Ellen Eriksson was born in 1900 in Ambjörby, in northern Värmland. Her mother died when the girl was little and she was adopted by her maternal aunt and uncle in Stockholm. The family lived at Östermalm in Stockholm and there Ellen Eriksson attended school. She was allowed to accompany her uncle to the Stockholm Folkets Hus in the evenings, where radical leftist socialist meetings were held. There she met children her age belonging to other political activists and had her first political education.

During the great strike of 1909, the family’s political engagement increased and her uncle Lars Eriksson Silow was active in the strike movement. He owned a bakery, so despite poverty-stricken strike times, the family managed well, with both money and bread. Her uncle died however in 1912 of tuberculosis. Thanks to the fact that her aunt Marit worked as a specialist ironing woman with her own ironing firm, their economy sufficed even after her uncle’s death.

When Ellen Eriksson had completed her elementary schooling, she started first as a millinery apprentice at Åhléns and later applied to the great department store Nordiska Kompaniet (NK). There however, skills in German, English and mathematics were required, and these Ellen Eriksson lacked. Therefore she started at evening school. Her life changed yet again in the spring of 1917, when her aunt Marit also died. Ellen Eriksson left the family flat and moved to a room of her own. She was earning money and could support herself, but since she had not yet come of age, it was decided that she must move back to Ambjörby where she could live with other relatives under their guardianship. After twelve years in Stockholm, Ellen Eriksson said farewell to the city and started her journey back to Värmland.

A short time after her arrival in Värmland, she met Karl Eriksson. They married in 1920 and settled down on Ellen Eriksson’s relatives’ small farm in Månäs, and the same year their daughter Elsa was born. The Erikssons had a couple of cows, some pigs and other small animals. Karl Eriksson worked for Uddeholmsbolaget in the forest and soon Ellen Eriksson’s life came to be marked by strikes. In November 1922, the union Svenska Skogs- och flottningsförbundet (LO) and the Syndicalists’ local organisations went out on strike for better wages and working conditions for the foresters. During the time that the strike was going on, the Eriksson family received eleven kronor a week from the strike fund. Thanks to their small farm, they still had food in contrast to many neighbours who were starving.

When it was time for their daughter to start school, the family left the farm and built a house east of the river. Ellen Eriksson’s political involvement was aroused once again. Their new neighbours were foresters and other labourers employed by the company Uddeholmsbolaget. Soon they started a union in the village and in 1931 the communist association was started: Femtå kommunistiska arbetarekommun. In 1930, Ellen Eriksson became a member of the Swedish communist party (later Vänsterpartiet). After their move, her husband had stopped working in the forest for Uddeholmsbolaget, and spent his time instead in small-scale business affairs. He bought up berries, piglets, fish and flowers and then sold them.

Soon after the Germans had invaded Norway in 1940, Karl Eriksson was called up. He was sent to Brattmon near the Norwegian border and there Ellen Eriksson and her friend Karin opened a little café that became popular with the military. The officers’ quarters were the other side of the wall from the kitchen and café itself. Ellen Eriksson sometimes also got the officers to listen to the Soviet radio programme Vackra Maj, in which they were updated on the Soviet view of the war. During the war, women had to bear a heavier burden than normal both at home and at work. Laundry was one of the heavy chores that took a good deal of strength and energy, not least in winter. Ellen Eriksson and the neighbouring women cooperated in visiting the municipality in Nyskoga to demand the construction of a laundry building. When the municipality said no, Ellen Eriksson started a politically neutral women’s club consisting of farmers, social democrats and Centre Party members. Because Ellen Eriksson was one of the leaders of the women’s club, the club was designated as communist. To clarify that the club was politically neutral, the leaders applied to the women’s left-wing organisation Svenska Kvinnors Vänsterförbund (SKV).

SKV had been started in 1931 from the liberal Frisinnade Kvinnors Riksförbund in order to facilitate cooperation between left-wing women from different parties. SKV’s first chairwoman was Andrea Andreen, a physician, sex educationist and pacifist. In November 1945, a great peace conference was held in Paris on the initiative of the women in the French resistance movement. 250 women from 39 different nations participated all in all. During the conference, the association Kvinnornas Demokratiska Världsförbund (KDV) was founded, a world-wide organisation against fascism and dictatorship, for peace and women’s rights. After the conference, the organisation Svenska Kvinnors Vänsterförbund became members of Kvinnornas Demokratiska Världsförbund, and at the same time, the women’s club in Ambjörby became members of SKV.

The battle for the laundry building continued and thanks to the women’s club, now SKV in Ambjörby, it became a reality. The women’s club also took the initiative to collecting money for a bridge at the ferry crossing in Ambjörby. The laundry and the new bridge were only a couple of the improvements that Ellen Eriksson participated in implementing, to the advantage of the women in the district.

Through her chairwomanship of SKV, Ellen Eriksson travelled a good deal, also abroad. One journey that made a special impression on her was that to the maternal congress Mödrarnas Världskongress in Lucerne in the summer of 1955, organised by KDV. The congress dealt with children’s rights and Ellen Eriksson travelled to Lucerne in the company of among others Andrea Andreen. Another journey was to the Soviet Union to see in situ how various parts of the country had been afflicted by the war.

SKV in Ambjörby was a very powerful club under Ellen Eriksson’s chairwomanship. They were active in everything from the problems in the district to international peace issues. This led eventually to Ellen Eriksson’s being voted into the Norra Ny municipal council in September 1965, where she was a member for eleven years. During this time, the cold war, which Ellen Eriksson called “an unpleasant and stupid thing”, was affecting the whole world. The tense international situation between east and west came to influence local politics. Ellen Eriksson often experienced opposition from the other parties on account of her political ideology.

Ellen Eriksson continued her engagement in the community even after she had left municipal politics behind her because of deteriorating eyesight. The problems of sparsely populated areas constituted an important issue for her and she was for example very critical towards the badly developed public transport in northern Värmland. At her most active, Ellen Eriksson was the chairwoman of seven associations, among them the Pensioners’ association. She actively participated in the work of writing the history of the district in the project Bygd i Förvandling that resulted in the book Så var det förr... – Pensionärer i Värmland berättar.

Ellen Eriksson died in 1993. SVK’s members’ magazine Vi Mänskor published an obituary written by her party colleague Bengt Berg, which ended with Ellen Eriksson’s own words: “You have to make a bit of a row for them to see that you exist ... perseverance wins.” 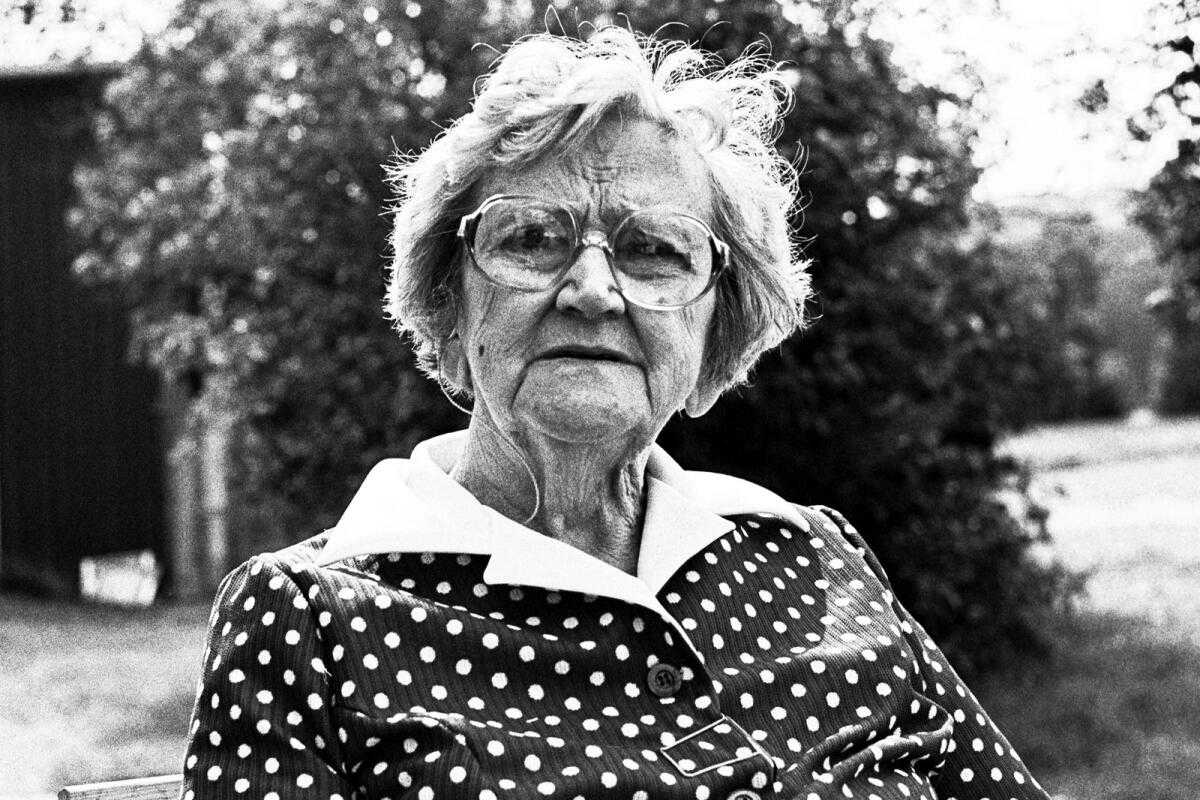