Ellen Fries was the first woman to defend her thesis at a Nordic university. She was also a pioneer of research in Swedish women’s history.

Ellen Fries was the only child of Beata Maria Borgström and Patrik Fries, colonel of the Svea artillery regiment and secretary at the Krigsvetenskapsakademi (the academy of military sciences). He was a keen history enthusiast and has been described as an extremely educated officer. Ellen Fries became interested in history as a child and received support of her parents in this interest and in her other studies. Due to illness she was home-educated by her mother over long periods. At the age of 13 she began to attend the Åhlin school. In 1870 she transferred to the newly opened high school section of the Wallin school. Along with three female friends – one of whom, Maria Cederschiöld, would become her biographer – she graduated as a private student from the Stockholm high school in 1874. At that time, there were still only a few women in Sweden who graduated. After graduating Ellen Fries spent a couple of years studying German in Leipzig and French in Paris. When she returned to Sweden she began to study Latin on her own and taught at the Wallin school. In October 1877 she enrolled at Uppsala University.

Her university experience had both negative and positive sides. Ellen Fries’ letters home to her parents contain joy about her seminars and lectures, but also reveal the burden of being a female pioneer: “If I show stupidity then many professors, who have never had to deal with a woman, will believe that all women are either more stupid than or equally as stupid as I am.” She complained that female students were unable to learn by socialising as the male students did. “The conversations they [the men] have with us women are just trivial, if they deem us worthy of a conversation at all.” Nevertheless, the few female students stuck together, socialised frequently and attended seminars and lectures together.

In May 1879 Ellen Fries took her exams in Latin, history, political science, Nordic languages and modern languages. In the autumn term of the same year she began her licentiate work, majoring in history. During her studies she met the known Uppsala historians of her day. The history society at Uppsala became an important environment for her, where she felt at home and was clearly treated with respect. In 1881 she became the first woman to give a talk at the society. Her subject matter was the St Bartholomew’s day massacre, based on a newly published German work. Later she gave a talk based on her dissertation work.

In 1883, shortly before she defended her thesis, Ellen Fries sat her licentiate exams in history, political science and Nordic languages. Her dissertation theme lay within one of the core research areas of the history department in Uppsala: seventeenth century Swedish history with a focus on nationalist and conservative perspectives. Ellen Fries wrote on Sweden’s and the Netherlands’ diplomatic connections during the rule of Karl X Gustav. On 26 May 1883 she defended her thesis in history at Uppsala University. The day before her defence she summarised her time at Uppsala which, despite her final success, contained a tone of bitterness. She complained of having been lonely during her period of study. At the same time the comments she made in her letters home reveal her independence and ability to distance herself from the difficulties of being a female pioneer. There was no way she could stay on at the university but her future plans were clear: she wanted to continue to research.

After her defence Ellen Fries moved back to Stockholm and completed a probationary year at Norra Latin, a boys’ school. Subsequently she taught at various different schools in Stockholm. In 1890 she became director of studies at the Åhlin school and helped set up a high school section there. Alongside her teaching she also continued to research. In 1889 she published Erik Oxenstierna. Biografisk studie in which she not only discussed the person of Erik Oxenstierna and his upbringing, but also the women he was surrounded by. She received acclaim from her fellow historians for the book, which was described as “one of the first genuinely modern examples of Swedish biographical work”.

As an unmarried woman Ellen Fries was legally independent but it was impossible for her to become employed by the university, an official institution, an archive or a library like her male colleagues. In contrast, it appears to have been an almost natural trajectory for male historians to enter into politics as a career, such as becoming a member of parliament or by taking a ministerial post. Ellen Fries also took the political route in the only sphere open to her, namely, women’s issues. Sophie Adlersparre ensured that the newly graduated doctor of philosophy joined the editorial board of Tidskrift för Hemmet. Ellen Fries was also one of the founders of both the Fredrika Bremer Förbundet and the women’s organisation Nya Idun in 1888. She was chair of Nya Idun from 1885 to 1887. She also initiated Svenska Kvinnors Nationalförbund (National Council of Sweden) which comprised a variety of Swedish women’s organisations, and was itself connected to an international women’s organisation.

Ellen Fries’ activities on behalf of the women’s movement were important to her continued historical research. In 1890 and 1891 she published two volumes of women’s history entitled Märkvärdiga kvinnor. The first part dealt with foreign women whilst the second part covered Swedish women. The foreword to the Swedish section reads: “The history of Swedish women remains largely unwritten. The cultural impact which women have had in Sweden, and the influence they have had on the development of society – as well as society’s influence on them – continues to go completely unnoticed by our researchers.” The volume on foreign women was based on already extant work, whereas the majority of the work on Swedish women was undertaken by Ellen Fries herself. She used sources from the Swedish national archives and the university library. During her summer holidays she also visited archives at various Swedish castles and estates, where she discovered new source material.

Some of the Swedish women that Ellen Fries chose to write about include: Birgitta Birgersdotter (St Birgitta), Kristina Gyllenstierna, Karin Månsdotter, Ebba Brahe, Queen Kristina, Maria Sofia De la Gardie, Hedvig Charlotta Nordenflycht and Fredrika Bremer. She was meticulous in setting the various individuals within their contemporary contexts. Her portrayals are vivid and concrete. Sometimes her own judgments emerge in her depictions, for example when she writes about Sophia Elisabet Brenner’s extensive education or Catharina Charlotta De la Gardie's contributions to saving women accused of being witches during the last Swedish witch trials in the eighteenth century.

In 1885 Ellen Fries found a manuscript at Uppsala University library which was later published under the title of Agneta Horns lefverne. She worked on an edition of the manuscript, which was posthumously completed by Sigrid Leijonhufvud. The collection entitled Teckningar ur svenska adelns familjelif i gamla tider, which she published in 1895, was also based on source material which she herself had discovered. She focused mainly on women and her accounts also include less prominent women as historical subjects. Both Märkvärdiga Kvinnor and Teckningar ur svenska adelns familjelif received positive reviews in Historisk Tidskrift.

Ellen Fries’ interest in schooling was also expressed in her study trip to French girls’ schools. In 1890 she wrote an article on co-educational schools for Dagny. She emphasized that she only agreed with this school form if the teachers “remained true to the belief that a good upbringing and education are of equal importance to girls and boys”. In an attempt to make history teaching more lively she gave lectures on Svenska kulturbilder ur 16- och 1700-talens historia posthumously published in 1901. She also released three popular science pamphlets on Den svenska odlingens stormän during the period of 1896-1899. Furthermore, she wrote articles for Föreningen Heimdals småskrifter, Dagny, Idun, Aftonbladet, and Stockholms Dagblad, as well as contributing to Nordisk familjebok*. Considering that she was simultaneously working as a teacher, a director of studies, and was heavily involved in the women’s movement, her output is impressive.

Like many of her female contemporaries Ellen Fries decided not to marry quite early in life. As a married woman she would have lost her legal independence and it would have been very difficult to have a career. When she was 17 years old she wrote in her diary: “If I could only see the role of women as that of producing children and serving men, then it would be alright. And these things are probably part of women’s roles in life, but I deplore and hate that calling… My plan is to become a teacher instead.” Despite being forced to choose between marriage and a career, and despite being prevented from entering the world of research and learning that she longed to join, she did not allow herself to be deflected. Within the given boundaries she succeeded in achieving personal development and in living a full life.

Ellen Fries died from appendicitis aged only 44 in 1900. She is buried at the Norra cemetery in Solna. 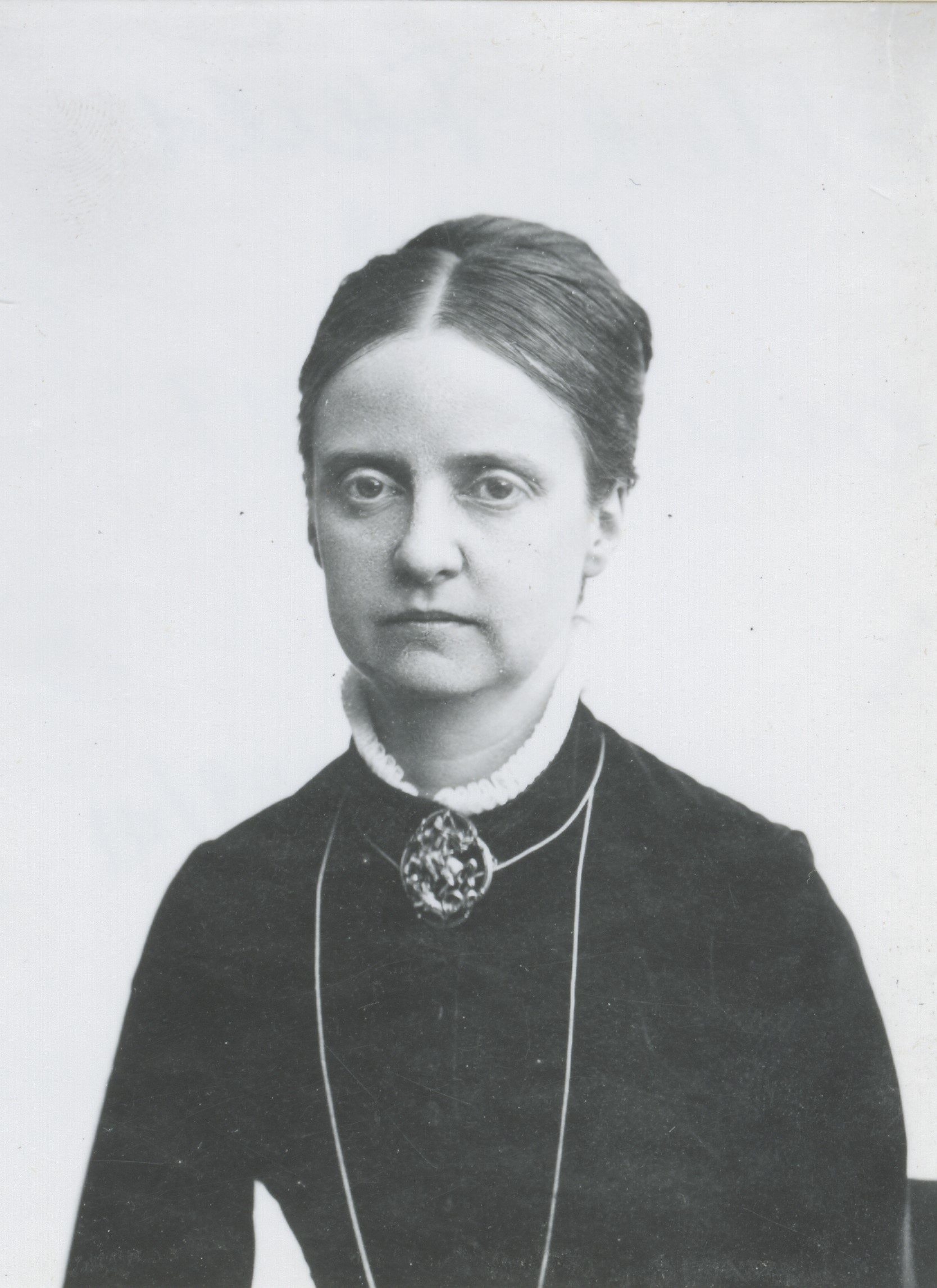