Ellen Key was a leading intellectual and an important former of public opinion, in both a national and international context, around the turn of the twentieth century. Her views on love, marriage, sexuality, childcare, education and aesthetics have informed generations of people.

Ellen Key was born in 1849 as the eldest of six siblings at Sundsholm farm near Västervik. Her home environment was both an educated and – in the context of her era – radical one. Ellen Key was a talented child and gained an unusually thorough education for a girl. Her intellectual curiosity was encouraged, not least by her mother, and she had free access to the family library from the age of 15. She already began to keep a type of intellectual “diary” as a young girl. She also, still young, worked as her father’s secretary during the winter he spent in Stockholm as a member of parliament for the Lantmanna party. She inherited her distinctive political liberalism from her home environment, but in time it took on an increasingly socialist tone, although she never formally joined the Social Democratic party.

Her father went bankrupt at the end of the 1870s and the family lost their farm. These events both forced and enabled Ellen Key to begin to work and she moved to Stockholm. In 1878 she and Anna Whitlock established the Whitlock co-educational school. Both Ellen Key and Anna Whitlock had given up their Christian faith at this point. That the school followed no particular confession was an integral aspect of the school ideology and led to the enrolment of children of Jewish parentage, including Karl Otto and Lisen Bonnier who later became close friends of Ellen Key. At the same time Ellen Key also began to write for Tidskrift för hemmet, mainly on female authors with an agenda focused on women’s policy, such as Camilla Collett, George Eliot and Elisabeth Barret Browning. It was her work on George Eliot that introduced her to Herbert Spencer’s teachings on evolution, a way of thinking that became very important to her and many other feminists at the time. Evolution theory became a way to criticise Christianity while highlighting the body, sexuality and women’s right to choose their own marital partners.

From 1883 Ellen Key worked as a lecturer at Arbetarinstitutet (the workers’ institute) and at various women’s and student’s associations such as Verdandi. She first gained national notoriety in 1880 when she defended freedom of speech and publication in conjunction with the accusations of blasphemy levelled at Hjalmar Branting and the reactions to Knut Wiksell’s lecture in which he condoned the use of contraception. The lecture was published in Huru reaktioner uppstå, Om yttrande och tryckfrihet, 1889.

Toward the end of the 1870s Ellen Key met the author Urban von Feilitzen, known as “Robinson”. They fell in love but he was married, had four children and a large farm and did not want to get divorced. They began a correspondence with intense intellectual exchange, which lasted for over ten years. Ellen Key’s network of contacts brought him closer to the radicals of the 1880s and for her the correspondence came to form an important part of her development, allowing her to sound out ideas which she later expressed in her books. In addition to women’s issues, one such example is their mutual interest in Jewish culture and cultural history, which later found expression in Ellen Key’s book Rahel Varnhagen, 1908.

During the 1880s Ellen Key strengthened her ties to Stockholm’s cultural radical circles, particularly to the female authors Victoria Benedictsson, Anne Charlotte Leffler and Alfhild Agrell. They all belonged to the sexually-liberated side in the so-called “sedlighetsdebatten” (morality debates). After the death of Benedictsson in 1888 Ellen Key released a book on her friend’s writings, and when Anne Charlotte Leffler died in 1892 Ellen Key also published a book about her. In the following years Ellen Key published several pieces on literature, for instance on Almqvist in 1897 and on Goethe in 1899. It was her views on literature in relation to women’s issues, the morality debates, religion and politics that caused conflict between Ellen Key and the wider women’s movement, but also between her and the conservatives, such as the professor of philosophy Vitalis Norström and the permanent secretary to the academy Carl David af Wirsén.

It was the defence of the late Anne Charlotte Leffler and the mathematician Sonja Kovalevsky which led to Ellen Key’s first break with the network based around Tidskrift för hemmet, spearheaded by Sophie Adlersparre, head of the Fredrika Bremer association. When fellow Fredrika member Eva Fryxell accused Ellen Key, Leffler and Kovalevsky in the Christian magazine Svensk tidskrift, in 1893, of being “naturalists” and critics of Christianity, Ellen Key responded in two articles which clarified the individual’s right to their own personality.

On 1 May 1894, at the meeting of the Social Democrats at Gärdet in Stockholm, Ellen Key gave a speech on the individual as a member of the collective. This speech was further developed in her book Individualism och socialism, 1895. The next year Ellen Key began to seriously read Nietzsche and this came to have a deep impact on her views on the body, sexuality and morality. She came to be called “the Swedish female prophet of Nietzscheism”. In 1896 Missbrukad kvinnokraft was published, the text which led to Ellen Key becoming known in the 1970s as “särartsfeminist” (a difference feminist). It gave rise to a storm of protests and a series of negative responses from female intellectuals, many of whom were also members of the Fredrika Bremer association.

Missbrukad kvinnokraft is an artificially constructed piece of polemics, where Ellen Key presents both sides of the debate herself. She challenges argumentation for the women’s movement based on what women will do for history, rather than what they already have done. Her desire to prove that women have not historically been victims leads to unusual conclusions. Using negative evidence Ellen Key explains why there have not been any female geniuses. Working women and peasant women were illiterate but upper class women were given possibilities. The fact that despite this women had not left historical imprints was proof that “it was not just external oppression that in the past prevented the development of female geniuses”. This conclusion lends Missbrukad kvinnokraft its deterministic note of impossibility and limitation, which remains as controversial today as it was in 1896. Despite this, the same views on a woman’s right to education and the encouragement to change society as expressed in Ellen Key’s other writings can also be found behind this rather peculiar line of argumentation.

Nietzsche’s “revaluation of all values” strengthened Ellen Key’s criticism of religion, and her views on women, class and sexuality. In 1898 she delivered the 70th-anniversary talk at the women’s Ibsen-celebration, entitled “Torpedo under the ark”. In it she grafted her Nietzscheist anti-Christian ideals onto Ibsen, where the individual “chooses their own bliss”. She was critical of the Christian dualist worldview, which belittles and minimises the value of earthly existence, and rejected the old ethic of female self-sacrifice. Instead she wanted to affirm the human ability to better oneself by one’s own choosing and to emphasise love in both the interpersonal and erotic sense. She believed that the seed to morality lay in instinct.

Ellen Key’s interpretation of Ibsen directly contradicted the generally accepted interpretation and Aftonbladet published an appeal signed by 284 women, including several prominent members of the Fredrika Bremer association, protesting against “the fading away of the old traditional ideal amongst Swedish women”. Although they continued to work together toward female suffrage this was a definite break in Ellen Key’s relationship with the Fredrika Bremer association.

During the second half of the 1890s Ellen Key emerged as an influential intellectual former of public opinion. She was focal in the radical cultural circles of the day, as revealed in Hanna Pauli’s painting Juntan, 1903. This was the period when she published her books Bildning, 1887, Skönhet för alla, 1899, and Svensk eller storsvensk patriotism, 1899, in which she made the case for Norway’s independence from Sweden. Several of these books were translated, but it was not until Barnets århundrade, 1900, in which she presented her pedagogical ideas, that she connected with a wider international audience, which opened many doors in Europe for her.

Now an international celebrity Ellen Key travelled across Europe in the first decade of the twentieth century. Her lectures attracted large audiences, and she became acquainted with leading intellectuals the likes of Martin Buber, R. M. Rilke, Lou Salomé, Romain Rolland and Malvida von Meysenbug. This was also the time when she composed her major work, Livslinjer I-III, 1903-1906, which dealt with love, aesthetics and religion, “life beliefs”. Livsliner I and Kärleken och äktenskapet gave rise to serious debates across wider circles than before, promoting love without the need for church blessings, divorce or a cap on childbirth, and by suggesting that women could have children without being married. She had presented these ideas earlier but here they were clearly and more systematically set forth. Further, as she was both more widely known and had greater influence, the impact of her words had increased. The book was translated into English, French, Italian and German. At the same time she became known as the seductress of youth and August Strindberg caricatured her as Hanna Paj in Svarta fanor.

Ellen Key returned to Sweden after ten years abroad. She had Strand, an Art Noveau Italian villa, built beside Vättern. She became acquainted with Malin Blomsterberg who became her housekeeper and friend until she committed suicide in 1925. For the 16 years that Ellen Key lived at Strand, a neighbour of Heidenstam at Övralid, she received many guests from near and far. Her guestbook includes 4000 names. The outbreak of the First World War left her, as a pacifist and optimist, deeply depressed and this is expressed in Allsegraren. Kvinnorna under världskriget, 1918. She spent this time writing an in-depth biography of her father, Minnen av och om Emil Key, 1915-1916. Her lust for life returned after the war and in Allsegraren II. Framtidens ungdom, 1924, the Ellen Key who saw the future in an optimistic light returned, and emerged in the pieces she composed when what she had spent all her life fighting for – female suffrage and full citizenship – became enacted in law in 1921.

Ellen Key died at the age of 75 on 26 April 1926 after a series of brain haemorrhages. She is buried in the family vault at Västervik cemetery. Her passing was marked by the international press across Europe and in the USA, Japan and Korea. Several squares and buildings have been named after her, including Keyhuset at Linköping University and the Ellen Key school in Västervik, Bromsten and in Hisings Backa. 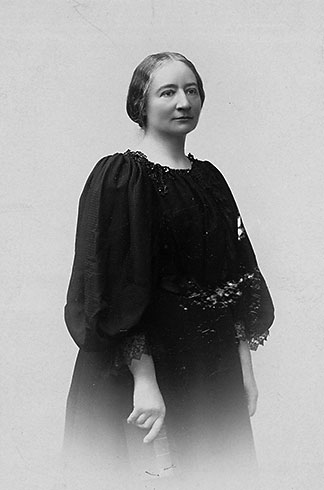