Elma Danielsson was one of the founders of the first Social Democratic women’s organisation in Sweden, the Kvinnliga arbetarförbund (female workers’ association), which was established in Malmö in 1888. She played an important part in the early workers’ movement, especially through her part in organising the women and through her work with the newspaper Arbetet.

Elma Danielsson was born in Falun in 1865. Her mother, Karolina Charlotta Sundqvist, ran a small boarding home and her father, Anders Sundqvist, was a businessman. Her father emigrated from Sweden and went to the USA in 1871. When Elma Danielsson was 16 years old she met Axel Danielsson and they became engaged. Axel Danielsson had boarded at her mother’s place while he was a student. After graduating from school in 1881 Axel Danielsson travelled to Uppsala in order to continue his education. At the same time Elma Danielsson began training as a public school teacher at the training-programme in Falun. Once she had completed her studies she began to work as a teacher. Axel Danielsson, who very quickly broke off his studies and then moved to Stockholm, and subsequently Malmö, tried to persuade Elma Danielson to join him, living as common-law man and wife. She was hesitant, given the judgement she was liable to suffer for taking such a step. Axel Danielson, in the meantime, had founded the Arbetet newspaper in Malmö and practised fearless form of journalism. She changed her mind after he was indicted with one of the first breaches of the press law. Elma Danielsson resigned from her post as a teacher in Söderhamn and moved to Malmö where she not only settled into a common-law marriage but also publicly became a Social Democrat. Elma Danielsson worked for Arbetet, albeit not officially: her salary was incorporated into Axel Danielsson’s wages.

Whilst Axel Danielsson was in prison for one and a half years, Elma Danielsson took on the responsibility for much of the journalism at the newspaper. She also served as a link between the paper and its jailed editor. It was also at this point that she played a fundamental role in the establishment of the Kvinnliga arbetareförbund in Malmö, in which she revealed herself to be a skilled and enthusiastic speaker who tended to be branded a so-called ‘Bastille-stormer’ and a ‘petroleuse’ by the bourgeois press. The contemporary conflict between the reformist and anarchist factions within the Social Democratic movement also emerged within the women’s association. Elma Danielsson, who was a reformist, resigned her position as chair in 1890, and this led to the dissolution of the association.

In the autumn of 1890 Elma and Axel Danielsson split up as a result of his unfaithfulness and his debauched lifestyle. Although the couple re-united the following year when they realised that Elma Danielsson was pregnant, they did not remain re-united for long. In July 1891 Elma Danielsson went to Falun where her mother lived and left her son, Atterdag, in her care. She travelled on to the USA herself where she worked as a governess and as home-help. She lived in America for five years, but returned home upon receiving the tragic news of her son’s death. The Danielssons once again re-united and in early 1897 they got married. Axel Danielsson died three years later as a consequence of long-term health problems. Although the Danielsson couple’s relationship must have been a turbulent one Elma Danielsson protected her husband’s reputation, which included recreating his workroom for posterity.

Elma Danielsson returned to working for Arbetet when she moved back to Malmö in 1897. Apart from a brief break, and in hindsight having taken on further journalistic duties, she worked for the paper until she retired. If women’s situations were noted in various articles these were usually penned by her. She became known for her cutting use of language which was not afraid to express criticism or sarcasm aimed at those whose opinions contradicted hers, but equally against herself. While working for the paper she was also intensely active in Social Democratic politics. Elma Danielsson was one of the instigators behind the Kvinnornas diskussionsklubb (women’s discussion club) which was established in Malmö in 1900. She also held an important position within the club. In 1901 Elma Danielsson was elected as a member of the board of Malmö workers’ branch of the Social Democratic party. Elma Danielsson thus served as a representative at the 1905 and 1908 party conferences, as well as at the Social Democratic women’s conference in 1908.

The Kvinnoklubb in Malmö and Elma Danielsson brought attention upon themselves by espousing increasingly controversial matters. One of the subjects they discussed was birth control, whilst the club submitted a motion on crèches and on whether men who assaulted pregnant women should suffer similar treatment to strike-breakers to the 1905 party conference. A hotly contested issue amongst the women at the Social Democratic party conference was whether women’s suffrage should be demanded immediately or whether the demand for this – as per the party line – should be postponed until after universal suffrage had been attained for men. Elma Danielsson and Anna Sterky supported the party line whilst the other eleven female representatives voted to introduce women’s suffrage straightaway.

During the first decade of the twentieth century Elma Danielsson was frequently called upon to give talks at both union- and political-gatherings in and beyond Scania. She attracted large audiences with talks on wide-ranging issues and subjects. She clearly belonged to the leading group within the emerging Social Democratic women’s movement, but she very quickly fell out with the rest of this group. The disagreement was partly to do with external issues and partly to do with Elma Danielsson’s tendency to generate conflict through her well-attested fiery temperament.

Elma Danielsson’s opinions diverged from her cohorts’ in two particular areas. The first was the proposal to introduce a ban on night-time work for women, which the Social Democratic women were strongly opposed to. Elma Danielsson, however, was in favour of this proposal which also followed the party line. This resulted in a dispute which can be followed in various articles in Arbetet as well as in the Social Democratic women’s journal Morgonbris. The second matter centred on whether it was worthwhile and possible to organise women in separate organisations – something which Elma Danielsson gradually became increasingly dubious of and finally outright opposed. This too generated harsh exchanges of opinion, in which she particularly fell out with Anna Sterky, the chair of the Social Democratic women’s executive committee, who had been intensively active in the various women’s unions for a long time.

This overt polemicizing within the women’s movement came to an end around 1910. Elma Danielsson continued to write for Arbetet, often very polemically, but she did not mention the women’s conferences which were held during the 1910s, nor did she mention the establishment of the Social Democratic women’s association of Sweden in 1920. In 1922 Elma Danielsson retired and withdrew herself completely from politics and public life.

Elma Danielsson died in 1936. She is buried at St Paul’s Mellersta cemetery in Malmö. 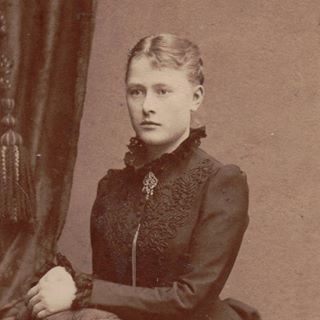