Elsa-Brita Nordlund was a senior doctor of psychiatry and Sweden’s first child psychiatrist. She undertook pioneering work on anorexia and was internationally active in trying to develop understanding and compassion for patients suffering from the disease.

Elsa-Brita Nordlund was born in Stockholm. Her father, Karl Nordlund, had gained a PhD and lectured at Uppsala University as well as being a teacher and headmaster at various schools. Her mother was Elsa Augusta Nordqvist. Elsa-Brita Nordlund never married and didn’t have any children. She sat her medical exam in 1927 and got her medical licentiate in 1938. She worked as a doctor and senior doctor and was deeply rooted in clinical work. She was not particularly interested in research but contributed important clinical knowledge and expertise to scientific journals such as Journal of Pediatrics and Journal of Psychosomatic Research.

At the time that Elsa-Brita Nordlund became qualified as a psychiatrist there were neither child nor youth psychiatrists in Sweden. She had to go abroad to get training. Thus from 1929 to 1930 she studied child psychiatry in Vienna, where she came in contact with theories and treatment methods based on psychoanalysis. Later on in her life she endeavoured to gain an understanding of the root of her patients’ struggles, emphasizing that symptoms should be treated as the visible part of a far more complex underlying problem. It is likely that her basic training in psychoanalysis contributed to this approach.

Elsa-Brita Nordlund mainly treated patients suffering from anorexia nervosa. She met Hilde Bruch, who was an expert in both research and the theories behind eating disorders and their emotional and relationship-based origins. Bruch’s approach inspired her. Hilde Bruch was a Jewish German doctor and psychoanalyst who, after the Nazis came to power, had fled to the USA, where she became a professor. Elsa-Brita Nordlund and Hilde Bruch maintained a lifelong correspondence which covered eating disorders and more private issues.

Elsa-Brita Nordlund’s path-breaking work with patients suffering from anorexia was clearly inspired by Hilde Bruch’s approach to the subject. Instead of viewing the clinician as an expert and the patient as the recipient of various efforts, the patient was treated as an expert in themselves whilst the clinician was to maintain an open mind and remain respectfully curious about the patient and their perspective. The symptoms were contextualised, and it was deemed necessary to understand what the patient was experiencing, as well as what emotional role the symptoms played and within what kind of relationship-based contexts they had arisen. This meant that Elsa-Brita Nordlund only recommended enforced treatments or proposed that the client should have weight checks in exceptional cases. Communication and cooperation was focal to treatment. However, it is also important to note that Elsa-Brita Nordlund was a pioneer of collaboration between the psychiatric sphere and, for example, endocrinology and odontology – areas which are impacted by anorexia.

Elsa-Brita Nordlund also took a great interest in young people who suffered from psychosocial troubles such as criminality and addiction. She was an expert for the Ministry of Health during their investigations of the so-called youth welfare schools of the late 1950s. Her review highlighted that those who were placed into youth welfare schools did not comprise a homogenous group but each one of them required care and treatment. She also commented that young people needed to be handled by people with life experience who could “see what is happening behind that which appears to be happening”. She emphasised the importance of tolerance and understanding as well as the significance of encouraging affected individuals to take responsibility for themselves. She discussed the difficulty of defining what is normal as opposed to abnormal whilst also pointing out that young people’s troubles had to be taken seriously. The medical board took on Elsa-Brita Nordlund as an expert whenever the topic of child psychiatry arose and required a decision. She was also appointed to oversee those institutions which treated children with psychosocial and psychiatric problems. Further, she was one of the experts behind the guide to sexual education Handledning i sexualundervisning för lärare i folkskolor, which was published in 1952.

Elsa-Brita Nordlund made notable contributions towards humanising the care of hospitalised children, not only within the psychiatric but also within somatic care. She placed the individual in the centre, highlighted the importance of understanding what lay behind the symptom or the behavioural problem, and emphasised the significance of contextual, relational and socio-economical factors. 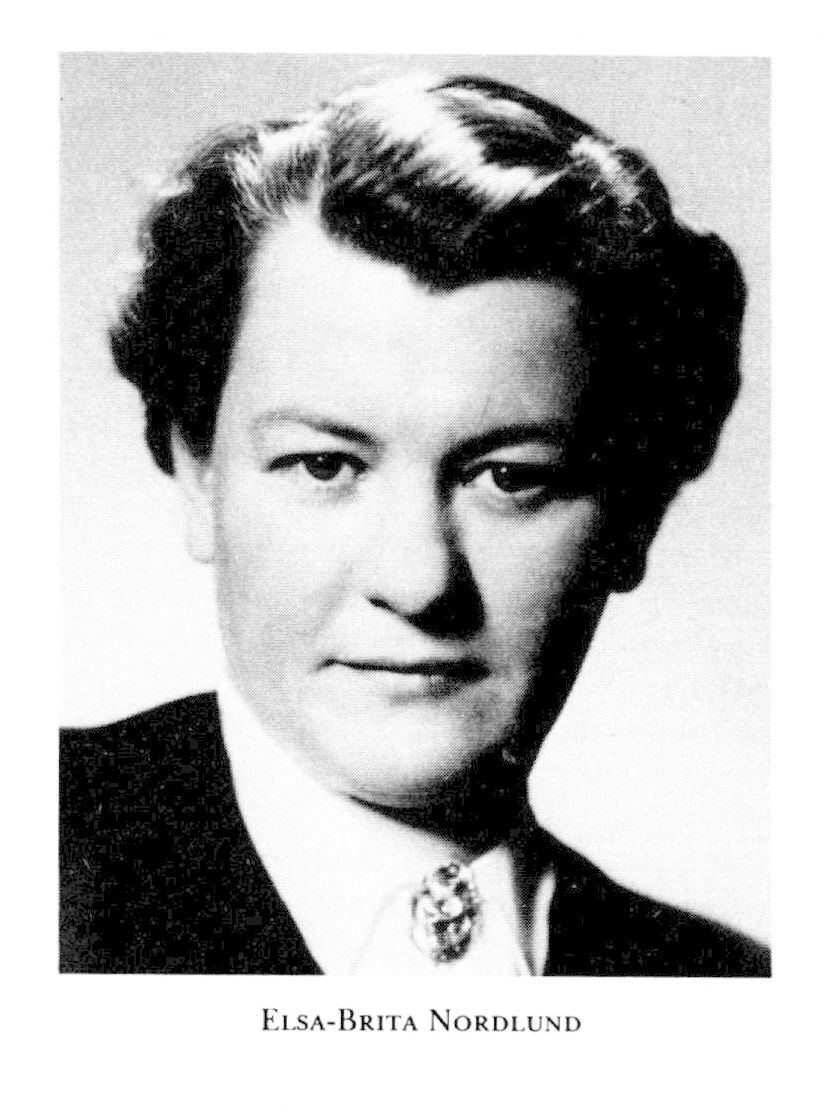