Elsa Gullberg was a textile artist, an interior designer, and a successful businessperson. Her contributions to society through producing “more beautiful everyday items” and in establishing connections between artists and factories were significant. For just over 40 years Elsa Gullberg played a central role in the discussions around design. Her instinct for textiles, for colour compositions, and for good design was infallible.

Elsa Gullberg was born in 1886. Her parental home was that of a wealthy Malmö merchant family. Her parents were Johan Svensson and Maria Svensonn, née Olson, who both hailed from well-to-do Scanian families. Her father had served as an inspector at several large farms before becoming a wholesale merchant and manufacturer. Elsa Gullberg’s familiarity with folk culture and with the skills self-sufficient households had to master served her well throughout her life.

Elsa Gullberg’s plans to train as a doctor came to an abrupt end when her father went bankrupt and died in 1903. Instead, at the age of 17, Elsa Gullberg enrolled at Tekniska skolan (now Konstfack, college of arts, crafts, and design) in Stockholm where she qualified as a drawing instructor. During her student years she provided for herself by teaching the young daughters of Stockholm’s wealthier families how to work with leather and metal crafting. Elsa Gullberg also created Christmas cards and patterns for wrapping paper on behalf of a company whilst developing a social network amongst Stockholm’s artistic and cultural circles.

After graduating from Tekniska skolan in 1907 Elsa Gullberg found employment at the handicrafts company Föreningen för Svensk Hemslöjd as a pattern-designer and as director of the association’s weaving section. She remained in post there until 1917. Her colleague Lilli Zickerman, one of the association’s founders who ran the Svensk Hemslöjd shop, came to have a lifelong influence on Elsa Gullberg’s professional career. She adopted Lilli Zickerman’s views on the importance of the quality of material, technology and artistic expression: developments in handicrafts should build on time-tested foundations.

Lilli Zickerman had set up a sample weavers’ studio in Vittsjö in 1905, followed by a weaving school in 1908. Elsa Gullberg worked as a pattern designer at both sites where she, along with a skilled sample weaver, produced woven bindings and sample weavings for use in various interior furnishing needs along with thinner fabrics for use in clothesmaking. Elsa Gullberg also used left-over yarn to create rugs. One of the aims of the sample weavers’ studio was to work out how much time and materials went into production in order to price up woven products retailed at the Svensk Hemslöjd shop and those produced on commission. Elsa Gullberg served as the director of the weaving enterprise until 1913 at which point she was succeeded by Märta Måås-Fjetterström. Elsa Gullberg was also director of the furniture design office. She would study older pieces of furniture at Nordiska museet in Stockholm and then design new pieces, some of which were displayed at the 1914 Baltic Exhibition held in Malmö. She assisted Lilli Zickerman who travelled across Sweden creating inventories of older handicrafts and folk textiles. In this Elsa Gullberg’s role was to produce photographic documents of the items. The resultant collection of 24,000 items is now held by Nordiska museet. The Konstfack archives contain a version comprising 12,000 copies. During the 2010s the collection was digitised by Riksförbundet för Svensk Hemslöjd.

Elsa Gullberg was awarded significant travel stipends. The first of these was for a trip to Denmark where she studied furniture finishings; the second took her to London and Paris in 1909; and the third saw her travel to Germany, Hungary and Austria in 1913. She visited Wiener Werkstätte and Dresdner Werkstätten in Hellerau, near Dresden, which allowed her to experience the social aesthetics programme of Deutscher Werkbund in practise. Deutscher Werkbund was a German federation, founded in Munich in 1907, by a group of architects, artists, and manufacturers. Their intention was to, with the help of artists and architects, elevate the aesthetic and functional quality of German goods aimed at those on lower incomes. Nothing like this existed in Sweden, a lack which Elsa Gullberg highlighted in a talk given to Svenska Slöjdföreningen (now Svensk Form) upon her return home in 1913. She believed that a similar need to raise the aesthetic and qualitative values of manufactured goods existed in Sweden. New younger members had joined the board of Svenska Slöjdföreningen: namely, Erik Wettergren and the architect Torsten Stubelius. The latter had been active in Munich and had seen for himself how Deutscher Werkbund functioned. In 1914 Svenska Slöjdföreningen set up an employment agency along the same lines and Elsa Gullberg was appointed its director in 1917, remaining in post until 1924.

Elsa Gullberg’s success in getting artists and manufacturers to collaborate in producing new items for the exhibition Hemutställningen held at Liljevalchs art gallery in the autumn of 1917 has gone down in history, along with Gunnar Asplund’s residential kitchen which she helped to set up at the exhibition. The point of the employment agency was to ensure that cheap, factory-made goods were of equal quality to more expensive hand-made items. The working class customers should be able to access beautiful things, not just trashy and poor copies of items produced to meet the values of bourgeois aesthetics. Ahead of the exhibition Elsa Gullberg prepared a weavers’ studio to produce cloth samples intended for industrial purposes. The 1917 Hemutställningen can be seen as the first step in the success that Swedish design came to enjoy in the international arena over the ensuing decades. In her role as director of the employment agency Elsa Gullberg also supplied furnishings for around twenty hospital spaces by hiring appropriate designers, architects and artists. It is the fact that Elsa Gullberg was responsible for the enterprise in its entirety which has led to her being viewed as a pioneer of interior design. In 1918 she became a member of Verkstaden, a group of 30 architects, designers, and artists who exhibited 19 interiors at Liljevalchs art gallery in Stockholm in 1920. On this occasion the intended audience was of a slightly better-off social class.

During the 1925–1927 period Elsa Gullberg was employed as the director of Thyra Grafström’s extremely exclusive embroidery company at Nordiska Kompaniet (NK, department store) in Stockholm. Elsa Gullberg had married the journalist and pilot Torsten Gullberg in 1912 but, in 1928, they divorced. This entailed that she had to change her working life now that she had four minors to provide for. She set up her own company, AB Elsa Gullberg Textilier och Inredning. Her shop and workshop premises were contained within a modern functional-style building designed by Birger Borgström near Hamngatsbacken in Stockholm. She received many commissions, both private and public. In addition to producing her own textile goods, such as rugs, upholstery material, and drapes she also transferred artists’ models and patterns onto textile works of art for prestigious environments. During the 1922–1923 period she collaborated with the artist Alf Munthe at Gunnar Asplund’s cinema Skandiabiografen. From 1924–1925 she was responsible for producing the interior fabrics used at Stockholm concert hall, which had been designed by the architect Ivar Tengbom, and she also produced Einar Forseth’s crown-patterned cloth. In 1928 she produced the interior fabrics for use at Ivar Tengbom’s Tändstickspalats, working again with Alf Munthe and with Carl Malmsten. In 1928 Elsa Gullberg also designed the rugs for Carl Bergsten’s interior furnishing of M/S Kungsholm. For Gunnar Asplund’s town hall extension in Gothenburg in 1937 she had skilled colleagues weave all the curtains and rugs according to her designs, as well as those designed by Gunnar Asplund – including Morotsmattan. From 1937–1938 Elsa Gullberg was responsible for producing the tapestries for Linköping cathedral. Her long-term collaborator, the artist Märta Afzelius, created the models for the tapestries. In 1944 Elsa Gullberg had a fantastic drop-curtain created as a silkscreen print for Malmö city theatre for which the artist Vicke Lindstrand had made the pattern. That year she also produced sacred textiles for use in King’s College Chapel in Cambridge, England. Some of these textiles were required to dampen the acoustics, others supplied artistic embellishment in particular areas or took the form of beautiful essential textiles as rugs, curtains, or drop-curtains.

Elsa Gullberg selected her artistic collaborators with confidence. Others have recounted that her eye for colour and her memory for colour were spot on just as her knowledge of textile fibers and techniques was unique. She also enjoyed international renown. Elsa Gullberg participated in exhibitions held in the USA in 1928, 1937, 1938. She also participated in the World’s Fair held in New York in 1939. Her own work was exhibited in London in 1951 and in Brussels in 1952. Indeed in 1950 she set up a branch of her enterprise, named Gullberg-Grey, in London. She held two solo exhibitions at Liljevalchs art gallery in Stockholm, one in 1936 and the other in 1945 which both generated a lot of attention. One of the things Elsa Gullberg revealed at the 1936 exhibition was how elegant artificial silk could be if only the correct techniques were used and it was combined with other materials.

Elsa Gullberg had numerous colleagues. An interesting biography of Elsa Gullberg, written by Elisabet Stavenow Hidemark, notes that during the 1943–1945 period she had 45 employees. These included weavers and seamstresses but also retail staff, receptionists, office workers, cleaners, as well as colleagues who worked at the silkscreen printers. With the help of the Austrian textile engineer Richard Künzl, Elsa Gullberg became the first person to introduce silkscreen printing in Sweden. This meant that her business could, in an affordable manner, print small quantities of drop-curtains and cloth by the meter. This was not possible using normal textile industry rouleaux machines which required larger volumes of material. Through silkscreen printing, designs produced by the artists Arthur Percy, Vicke Lindstrand and Elsa Gullberg herself were transformed into material printed by the meter. Her shop offered a rich selection of interior fabrics for use by the private individual. Her company remained at the same address until 1955 when Elsa Gullberg moved her business to Vaxholm where it was renamed E. G. textil AB.

Elsa Gullberg died in Vaxholm in 1984. 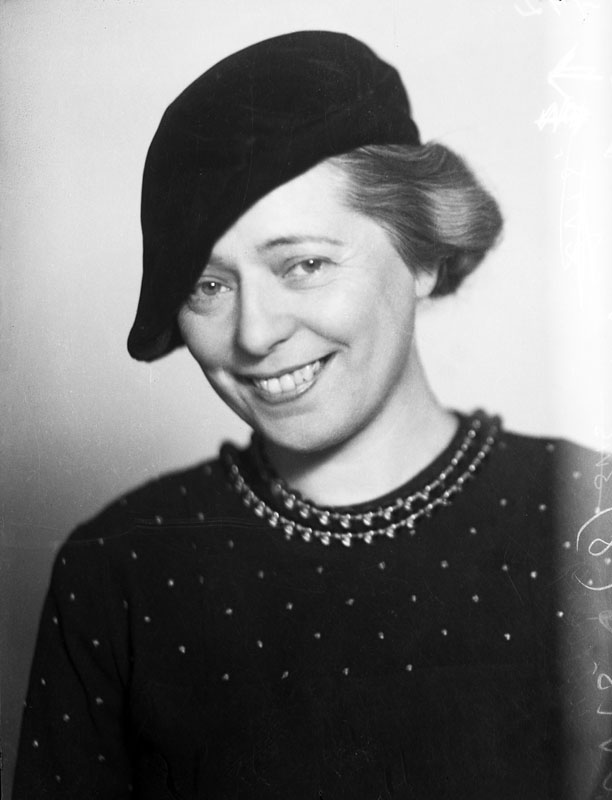