Elsa Marianne von Rosen was born on 21 April 1924 in Stockholm, the daughter of Count Reinhold von Rosen, an artist, and his first wife Sally Elisabeth, née Österryd. The year after her birth, the family moved to Åkerö Castle by Lake Yngaren in Södermanland. There were already two sisters in the family and three brothers were born during the 1920s: Fredrik, Adalbert and Christer. Their childhood surroundings gave them a wealth of opportunities for playing in the forest and countryside, and in the evenings, their parents read aloud to them. According to her autobiography, their father had a violent temperament. Hard physical punishments were not unusual so mother and children were all afraid of him.

When Elsa Marianne von Rosen was six years old, her schooling started with a governess in their home, along with one sister and a girl from the neighbourhood. After two years, the children started in the parish school. In 1934, Elsa Marianne von Rosen and her older sister moved to their paternal grandmother and grandfather in Stockholm to start attending the girls’ school Nya elementarskolan för flickor. During the years at her grandmother’s, Countess Elsa von Rosen, she was given the opportunity of starting ballet lessons with the ballet teacher Vera Alexandrova. Her grandmother supported her interest in dance.

After a brief stay back at her parents’ home, Elsa Marianne von Rosen moved again to her grandmother’s in Stockholm, where her sister had remained, and returned to the same school as before. Her ballet career took off. She was allowed to participate in Vera Alexandrova’s pupils’ performance in the Stockholm concert hall, and her grandmother paid for the ballet lessons for Vera Alexandrova and later for Otto Thoresen, the male soloist at the Opera.

Otto Thoresen believed in his pupil and had her as his partner in Michel Fokin’s ballet Le spectre de la rose at a performance in Oslo in December 1938. A number of appearances in various charitable contexts followed, as well as a dawning interest in the press. Elsa Marianne von Rosen often composed her own dances but wanted to learn classical technique so she took private lessons for Valborg Franchi, the leader of the ballet school at Kungliga Teatern (now Kungliga Operan). On 4 March1941, Elsa Marianne von Rosen made her professional debut in the Stockholm concert hall that her grandmother had hired. Her debut was acclaimed in the press and Elsa Marianne von Rosen was described as ”gifted in dance” and ”skilful far above the average”.

A period of engagements in revues and soirées followed, and in February 1943 a second evening of dance was arranged at the concert hall, for which most of the dances had been composed by the ballet director at Kungliga Teatern, Georg Gé. One month later, Elsa Marianne von Rosen travelled to Copenhagen for lessons at Birger Bartholin’s classical ballet academy. She also had lessons for Harald Lander, the ballet master at Det Kongelige Teater in Copenhagen. Back in Stockholm, she had various appearances, and in the autumn of 1943, Elsa Marianne von Rosen had an engagement at Oscarsteatern. In the summer of 1945, she was offered the opportunity of playing Ulla Winblad in the Bellmansspel in Copenhagen, and also of being a guest pupil at Det Kongelige Teater for two years. There she learned the Danish Bournonville school of dance, a ballet tradition from the 1800s when August Bournonville was ballet master. Elsa Marianne von Rosen lived during that time in the parental home of the artist Allan Fridericia – she had met him during her stay in Copenhagen. The two now wanted to get married, but they met great opposition from Elsa Marianne von Rosen’s family. Allan Fridericia was Jewish, a foreigner and a sympathiser with left-wing politics. The marriage had to be postponed.

Elsa Marianne von Rosen and Allan Fridericia were married on 1 August 1950 in the city hall in Copenhagen. The following year they undertook another tour with Fröken Julie, and in the autumn of 1951, Elsa Marianne von Rosen was appointed as prima ballerina at Kungliga Teatern, the first not to have been trained at the theatre’s school of ballet. She settled down in Stockholm, while her husband stayed in Copenhagen. Birgit Cullberg was employed as choreographer at Kungliga Teatern, where she created another ballet for Elsa Marianne von Rosen, Medea, in which her dramatic role interpretation came into its own.

Elsa Marianne von Rosen made an impression as a prima ballerina in many ballets. In 1953, she was allotted the role she had always dreamt of, the Queen of the swans in Swan Lake, in a production by Mary Skeaping, the new ballet director. In 1955, she danced the title role in Sleeping Beauty and received brilliant reviews. One critic stated that the role was ”a natural and complete victory for Elsa Marianne von Rosen”. Her interpretation of the glove seller in Gaîté Parisienne, in which — as so often — she danced with Björn Holmgren, was ”brilliant”. In Ivo Cramér’s ballet Le Fils prodigue in 1957 she created the Queen of Arabia, and she danced yet another dream role in Giselle in which she once again surprised the audience with her empathic interpretation.

Elsa Marianne von Rosen left Kungliga Teatern in 1959 and moved to her husband in Copenhagen. In 1960, she became the leader of Den Skandinaviske Ballet, a company that resulted from a cooperation between the Swedish national Riksteatern and Andelsteatern, where Allan Fridericia was the director. Dancers were sought all over the Nordic countries and the premiere took place in Växjö on 2 February 1960. The critics acclaimed this Swedish-Danish cooperation as ”brilliant” and ”a winner”. The tour around Sweden and Denmark was concluded in Osby in October after 110 performances. After that, Elsa Marianne von Rosen created the ballet Helios after the discovery of the bronze-age Egtved girl, with scenography by Allan Fridericia, a ballet that was also filmed for TV. The Skandinaviska Baletten had several productions of Bournonville’s ballets, in which Elsa Marianne von Rosen’s deep knowledge and skills in the Bournonville school came into their own. She also created many new dance works, like Jenny von Westphalen about Karl Marx’ unhappy wife; Jungfrukällan and Tatjana and several more. In 1962, Elsa Marianne von Rosen was awarded the Carina Ari medal, an honourable decoration for her contributions to the art of dance in Sweden.

From 1970 onwards, Elsa Marianne von Rosen was the director of ballet at Stora Teatern in Gothenburg. There too she introduced the Bournonville school and set up Bournonville’s Napoli in January 1971. Many of the dancers found it difficult with all the mime scenes, for which acting talents were demanded. Bournonville put as much emphasis on the acting and facial expressions as he did on the dance itself. The production received much acclaim however, and returned later. Swan Lake and Pictures at an exhibition were also great successes during her time at Stora teatern. In 1976, Elsa Marianne von Rosen left Gothenburg for family reasons; she wanted to be closer to her family in Copenhagen.

In 1980, Elsa Marianne von Rosen took up the post of ballet director at Malmö Stadsteater. Her first major creation for Malmö Stadsteater was Johannesnatten with music by Gunnar de Frumerie, and its premiere was at New Year 1981. It was a great success. The following year, the premiere of Bournonville’s Napoli took place in Malmö. This production rendered her the Kvällsposten Thalia Prize. During 1982, she was also the guest choreographer at the Marinsky Theatre in Saint Petersburg. Back in Malmö, Elsa Marianne von Rosen succeeded in engaging Mary Skeaping to direct Sleeping Beauty in 1982, which became a great artistic success. Other memorable ballets from 1984 and 1985 in Malmö were Faust and Romeo and Juliet. About the latter, the major Swedish daily newspaper Svenska Dagbladet critic wrote that it was ”the most beautiful ballet that had ever been performed on a Swedish ballet stage”.

In 1984, Elsa Marianne von Rosen was honoured with the medal Litteris et Artibus. At that point she took the initiative to having a book written about the Malmö ballet, which was published in 1985. Conflicts with the corps du ballet, who wanted more guest choreographers led to Elsa Marianne von Rosen leaving Malmö. However, she continued to teach at her own school of ballet. In 1990, she and her husband produced yet another Bournonville ballet, Trymskvidan, in Copenhagen. The year after, Allan Fridericia died. Thereafter, when she was 70 years old, Elsa Marianne von Rosen danced as a guest in Dödens triumf at Det Kongelige Teater for several seasons. Three years later, she once again choreographed Les sylphides, this time in Gothenburg. Her last appearence was in the movie Ballerina in 2012. 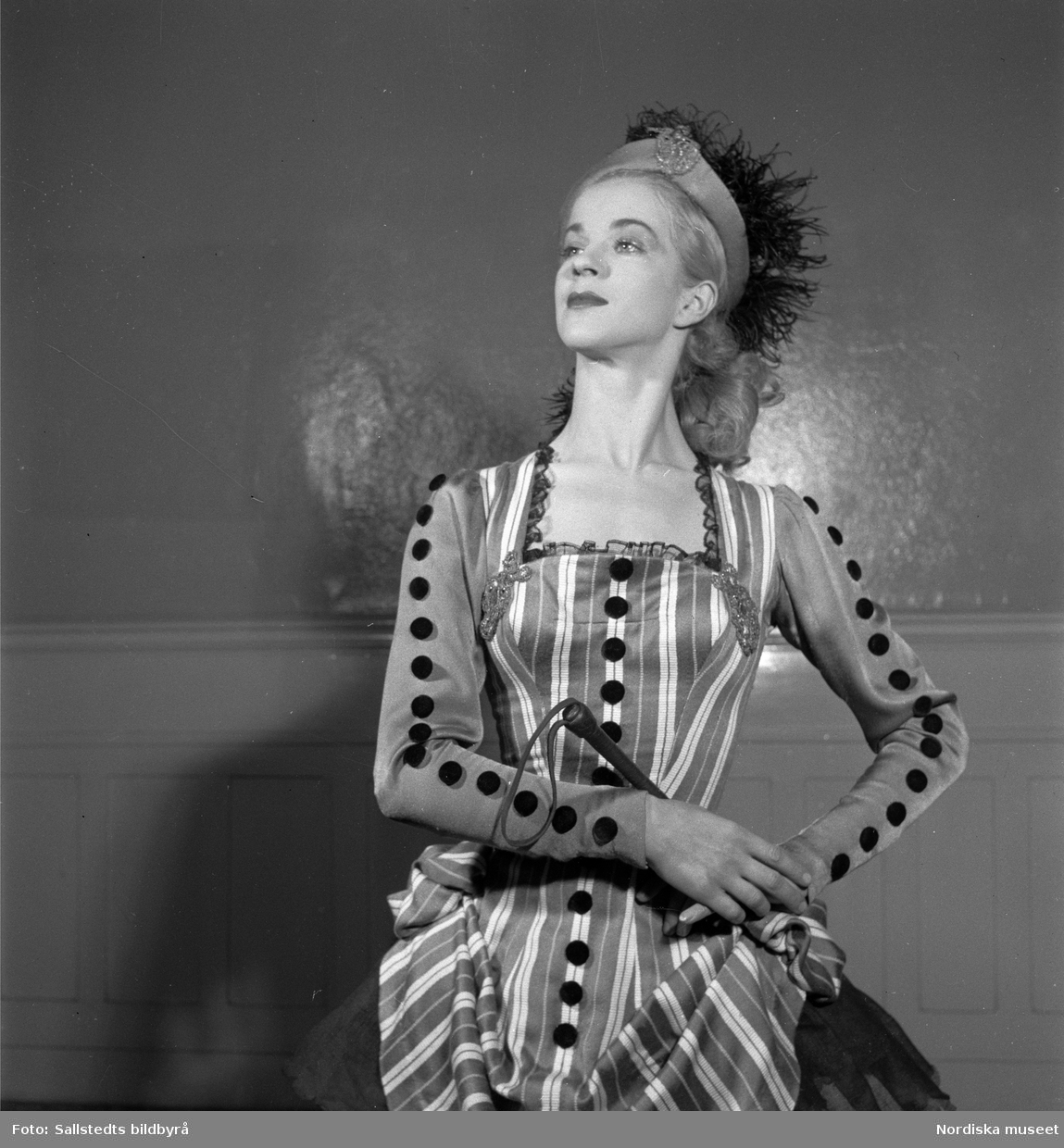