Else Kleen was a journalist who, along with Elin Wägner, is viewed as “one of the soldiers of the suffrage movement”. Her articles and reports on mental health care, the so-called “skyddshemmen” (rehabilitation centres) and correctional treatment, gave rise to public debates and improvements in conditions for those in treatment. She was also a much-feared fashion critic.

Else Kleen grew up in an artistic and intellectual home in what was then the newly-built Saltsjöbaden outside of Stockholm. She had many ties to the Norwegian and Swedish cultural trends of the day. Her mother, Andrea Gram, was of ancient Norwegian bureaucratic lineage and was a promising artist who had trained as a painter in Germany. There she had met Emil Kleen, who had initially belonged to the August Strindberg social circle in Uppsala before he began his academic career path as a medical doctor and general practitioner.

Else Kleen, the eldest of five siblings, first followed in her mother’s footsteps by taking painting lessons from Rikard Bergh, and Antonio de la Gandara in Paris. While in Paris she met the architect Torben Grut who, on his return to Sweden, would become famous for designing the royal summer residence Solliden on Öland and the Stockholm Stadium. Else Kleen married Grut in 1902 but the relationship did not last long. By 1906 Else Kleen was preparing to divorce Grut and started earning her own income by writing fashion articles for Dagens Nyheter for which she also supplied her own illustrations.

Else Kleen’s synonym Gwen quickly gained notoriety. She and Elin Wägner covered the activities of the women’s and the suffrage movements in Dagens Nyheter as well as in the journals Rösträtt för kvinnor and Idun. During this period she also wrote two books, which came to be released in several editions: Gwens bok för hemmet, 1907, which was a handbook with a scientific approach to housework, and Kvinnor och kläder. En krönika om adertonhundratalet, 1910, which shows how women’s clothing reflected the changing epochs through time.

In the autumn of 1910 Else Kleen switched to Stockholms Dagblad, where she wrote daily reports from the large international suffrage congress in Stockholm that was held in the spring of 1911. At this point she was remarried to Henrik Koppel, who had been the financial director at Dagens Nyheter for some time. Koppel also ran the publishing company Ljus, which published many works by radical authors. Through contact with Marika Stiernstedt’s social circle Else Kleen got to know the forensic psychiatrist Olof Kinberg at Långbro mental hospital, which in turn led her to focus increasingly on social issues, particularly the institutional care system. In 1913 she wrote several major articles on the need for counsellors who could manage the interests of mentally ill people. She also began a collection in Stockholms Dagblad which gathered 6,000 kroner from the readers and helped to establish the first permanent post of hospital counsellor in Sweden.

In 1914 Else Kleen and Henrik Koppel went their separate ways and Else Kleen began to work at Stockholms-Tidningen, where she would remain until the early 1960s. There she introduced her new synonym, Fru Hein, which she used for what was then known as the “women’s pages”, dealing mostly with matters of the home and fashion. She used the by now well-established synonym Gwen for investigative journalism on social matters. After a short marriage to Göran von Horn, an official serving with the Ministry for Foreign Affairs, and a book on France during the First World War, in 1920 she met Gustav Möller, soon to become Minister for Social Affairs in Per Albin Hansson’s “people’s home” government. They each went through lengthy divorces but eventually, in 1926, Kleen and Möller married after many secret meetings. One of these had been a holiday in Piksborg, Småland which would become decisive in Else Kleen’s journalistic career and its focus on institutional care. The summer guesthouse they stayed at was next door to a rehabilitation centre for unruly young men, where criminal, psychologically ill and mentally disabled young boys were lumped together in an attempt to instil good behaviour and discipline. In 1934 Else Kleen had enough collected material for a first series of articles on the brutal rehabilitation system. Following many scandals surrounding the government advisor, who had involved herself in the social policies of the country, a state enquiry was commissioned and in 1936 a proposal for improvements in personnel training and career preparation for the boys was accepted. Else Kleen published a book that year herself called Skyddshemmen, based on her collected material.

As a result of coming into contact with a prisoner serving a life sentence, who had written a novel about life in the cement cells on Långholmen, Else Kleen continued her research into institutional care. She persuaded Bonniers to publish the book as a testament to the brutal punishments administered, and supplied her own foreword. The prison staff reacted negatively, however, and in 1940 Else Kleen was charged with slander according to the freedom of the press regulations of the time. Her punishment was two months’ incarceration at Långholmen. Upon her release the public opinion had turned, however, and she became celebrated for her activism. In 1945 a proposal to reform institutional care was adopted. The proposal included several of Else Kleen’s suggestions regarding training and preparation for life after prison, topics she had treated in her book Fången, människan, straffet, 1944.

Else Kleen had the support of another two strong women during the eventful era of the Second World War. These were Ada Nilsson, a female doctor whom Else had come to know in her youth, and the Soviet ambassador Aleksandra Kollontai, who had met Else Kleen’s fifth husband, Gustav Möller, during her travels in the North prior to the Russian revolution in 1917. During Kollontai’s fifteen years serving as the ambassador to Sweden, 1930-1945, Kleen socialised with her frequently. As Kollontai’s friend, and like Ada Nilsson and the other women involved in the journal Tidevarvet, Else Kleen was secretly tapped during the war years.

Else Kleen continued to write for Stockholms-Tidningen until the early 1960s, but didn’t engage in any further social campaigns. The last years of her life she spent with Gustav Möller at the Nockeby home, which was a communal living environment of the sort that Else Kleen had written favourably about.

Else Kleen died in 1968 and is buried at Bromma cemetery. 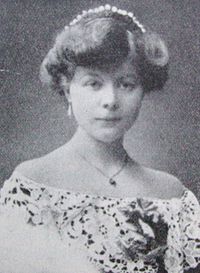