Elvira Harms was an entrepreneur within the fields of teaching, design, and pattern construction. She was the founder of Stockholms Tillskärarakademi (tailoring academy).

Elvira Harms was born in Värnamo in 1876. She grew up within a textile design environment. Her father, Edvard Winter, was a tailor who hailed from Germany. Her mother, Matilda Winter née Kihlström, had worked in the confectionery industry. Soon after her birth she and her family moved to Oslo, Norway, where her father established a dress-making shop. Elvira Harms attended eight years of school and gained entry into the Oslo conservatory of music (now Norges musikkhøgskole) and dreamt of becoming a singer. However, these plans changed following her father’s sudden death when she was 18 years old. For a short time she, along with her mother, then ran a perfume shop. Elvira Harms then made her way to Berlin, the cultural metropolis of the era, seeking work as a nanny. She remained in Berlin for a couple of years and began to train as a tailor whilst also working at a well-reputed dress-maker’s shop.

Towards the end of the 1890s Elvira Harms settled in Stockholm where she worked for a company that produced sewing accessories. It was not long before she met Ernst Harms, controller of stores at Grand Hôtel. The couple married in 1902 and went on to have three daughters. Elvira Harms continued to work at the sewing-accessory shop whilst her children were young and she also ran her own sewing studio for the neighbouring women. She then began to give sewing lessons to the young chambermaids who worked for diplomats’ wives. There was a lot of interest in her lessons and then the idea of setting up a school arose.

In 1913 Elvira Harms opened a private tailoring school, named Stockholms Tillskärarakademi. She appears to have put her plans into action following a meeting she had had with Emilia Broomé, politician and feminist, who was a pioneer of vocational training in Sweden. She encouraged Elvira Harms to undertake a more organised form of teaching. The school was intended “partly for those seeking complete vocational training, and partly for those who want to learn how to sew clothes for themselves.”

Although sewing schools already existed there were none that focused on tailoring. The courses offered at Stockholms Tillskärarakademi were unusually short in duration, lasting less than a month, so Elvira Harms was able to attract an entirely new type of customer. Initially Stockholms Tillskärarakademi only offered courses in creating ladies’ clothes but from 1918 onwards men’s clothes courses were also on offer and the school began to accept male students. Female and male students were, however, taught separately right up to 1959. Concurrent with her teaching duties Elvira Harms was also the only woman to complete the first master tailor’s course offered in Sweden.

In 1922 the expanding academy moved to larger and lighter premises at Drottninggatan 71A, where it remained until 1973. In addition to vocational training and hobby-courses, a pattern department was also set up. A further innovation was a department for mannequins. Elvira Harms was often called upon as a fashion expert and writer for journals including Idun and Husmodern. For a time she also served as fashion writer for the publishing house Bonniers Förlag. She had a particular talent for making an impact in the press, both as a writer and by advertising the annual exhibition of student work from Stockholms Tillskärarakademi.

Quality was important to Elvira Harms and so she campaigned for tailoring to become a professional qualification. She wanted journeyman’s papers to become mandatory for apprentice tailors. She often wrote polemical pieces which garnered both allies and enemies. In an article she wrote for Idun in 1925 Elvira Harms expressed her opinion on making seamstresses a professional corps, a step she recommended for young women seeking a way into the labour market: “We have a lack of properly qualified home-based seamstresses, thus there is always a demand to be filled”.

Elvira Harms managed her finances so well that she was able to have two houses built on the most beautiful plots of land on Stora Essingen. She was also actively involved in social issues. She was a pacifist and during the First World War she ran sewing workshops for those in need. These workshops not only provided training but also some food. She also ran courses in mending and upcycling older garments. When she turned 70 Elvira Harms was awarded the large gold Pro Patria medal in recognition of her services to society. The following year she retired as principal of Stockholms Tillskärarakademi. The school was later taken on by her daughters and in 1972 it was taken over by the vocational school Påhlmans Handelsinstitut.

Elvira Harms died in 1951 whilst planning her 75th birthday. The journal Hertha commemorated her with a kind portrayal which described her as “bold and strident, she loved her work and dealt with obstacles with a disarming sense of humour”. 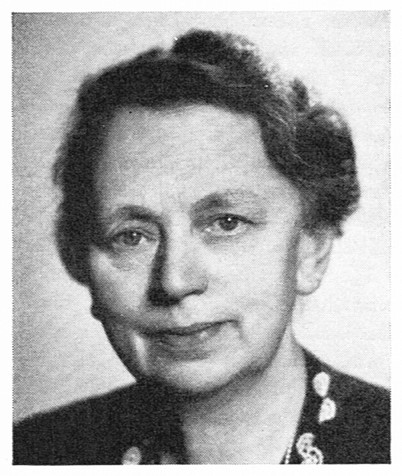