Emanuella Carlbeck was the first person in Sweden to set up a school for developmentally-challenged children.

Emanuella Carlbeck was born at Nårunga parsonage in Älvsborg county in 1829. Her father Johan Carlbeck was the local parson at that time. Like many other priests in the Västgöta region her father was a follower of Emanuel Swedenborg, and he questioned the state church and emphasised individual responsibility and taking a personal stance in matters of faith. Emanuella Carlbeck’s mother was Gustava Syk, who was the daughter of a restaurateur in Karlstad.

Emanuella Carlbeck was 37 years old when she began her enterprise. She had spent the first 30 years of her life being what was then known as a ‘stay-at-home’ daughter, and the seven years after her parents’ death she spent living with relatives. It was after her sister, Ephraima, gave birth to a boy who was developmentally challenged that Emanuella Carlbeck’s interest in disabled children emerged. At that time children with impaired faculties – usually referred to as ‘idiots’ – were perceived as being completely incapable of being educated. The same perspective was applied to those who were deaf and blind. Once sign language had been developed for the deaf and a form of language provided for the blind it then became possible to set up schools for these children. Emanuella Carlbeck therefore thought it was quite natural to approach deaf- and blind-teachers in Gothenburg in order to find out whether it would be possible to set up a school for people suffering from intellectual impairments. Thus, in 1867, Emanuella Carlbeck opened a school at Nya Varvet in Gothenburg which catered for four children. Just a few months later the school, which was funded by the children’s own parents and through private donations, moved to the Skövde area.

Following the publication in the Aftonbladet newspaper of an article by Josefina Wettergrund – better known by her byline Lea – on the school general awareness grew that even people who were intellectually impaired could also be educated. The number of pupils increased and as the school became famous it had to move to yet larger premises in Skövde in 1868. Josefina Wettergrund also began fundraising for the enterprise, and in 1869 the Föreningen för sinnesslöa barns vård (association for the care of intellectually impaired children) was established. The fundraising continued and became a nationwide cause, and this resulted in the opening of a second school in Stockholm.

Emanuella Carlbeck gained much of her knowledge of special-needs pedagogy by reading a lot of the available material on the subject. She also undertook study trips to Denmark and Germany to visit their already extant institutions for intellectually impaired people. From 1872 onwards Emanuella Carlbeck began to attend the so-called ‘abnormal school’ meetings which were periodically held within Scandinavia.

Emanuella Carlbeck received a lot of support for her enterprise from the Västergötland clergy. They also supported her acquisition of the Johannesberg estate near Mariestad in 1875, although the majority of the finances for the purchase came from donated money and funding from the county council. As her surviving papers reveal, Emanuella Carlbeck felt that working on behalf of the ‘cause of idiots’ was a God-given task. She claimed that her contract was not with society but with God. She also viewed herself as a social mother-figure for intellectually impaired children. Johannesberg was a flagship in terms of the care of intellectually impaired children during the first half of the 1900s. The school also attracted major international interest in the methods of care and teaching employed with these children. Every year the school was visited by interested people from other countries. 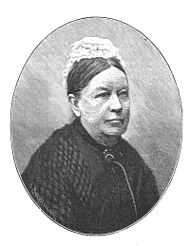