Emilia Broomé was a liberal politician who was a driving force in the campaign for women’s suffrage, the peace movement, and social issues. She was one of the founders of Sveriges Kvinnliga Fredsförening (Swedish women’s peace association) in 1898 and served as the association’s first chair until 1911.

Emilia Broomé was born in Jönköping in 1866. She was the only child of Isak Johan Gustav Lothigius, an appeal judge and assistant judge, and his wife Emilia Augusta Klementina Stridbeck. Her parents were cousins. They had married in 1864 and spent their married lives in Jönköping. Emilia’s mother died from complications of childbirth just two months after Emilia was born which meant that Emilia Broomé was brought up by her father. He was liberal both in terms of his politics and his religion and he brought his daughter up according to his liberal principles. The family home seldom accommodated guests and as such it generally comprised Emilia Broomé, her father, and a housekeeper.

Emilia Broomé attended Jönköping elementary school for girls from 1872-1881. In the autumn term of 1881 she began to train at the Wallin school in Stockholm, from which she graduated in the spring term of 1883. During this period her closest friend was Julia Marcks von Württemberg, but she also socialised with Sigrid Leijonhufvud. Once she had finished at the Wallin school Emilia Broomé continued her studies at Uppsala university during the autumn term of 1883. In December 1884 she sat her medical-philosophy exams there.

During her childhood Emilie Broomé would often spend her summers at Aranäs where she met the man who she went on to marry, Erik Ludvig Broomé. He was a civil engineer and the son of Gustav Broomé, professor of civil-, criminal- and litigation law. Emilia and Erik Ludvig Broomé married in November 1891. They lived in Norrköping where they had a daughter, called Nanny Birgit Emilia. Erik Ludvig Broomé died in 1893.

From 1886-1891 Emilia Broomé worked as a teacher at the Jönköping elementary school for girls. She had given up work once she married but then returned to her profession in 1893 upon being widowed. She worked at the school until 1897 when she moved to Stockholm. During her time in Jönköping she had set up the first holiday camp for school children in the town with the help of Ivan Bratt, a doctor and politician for public health matters. In 1898 Emilia Broomé began to work at the Whitlock co-educational school, and she remained in post until 1904. Following her move to Stockholm her interest in pedagogy waned and was instead replaced by increasing political activism. She was mainly active within the spheres of social reform, the peace movement, and women’s emancipation and legal rights.

Emilia Broomé was one of the founders of Sveriges Kvinnliga Fredsförening, established in 1898, and served as the first chair until 1911. Activism on behalf of the peace movement and women’s suffrage is a constant theme throughout her life. She began her suffragette activism in 1902 when she attended a meeting in support of Karl Lindhagen’s proposal to award women the right to vote. When the Stockholm förening för kvinnans politiska rösträtt (association for women’s suffrage) was set up in 1902 Emilia Broomé became its chair and remained as such until 1906. She was also an active member of Landsföreningen för kvinnans politiska rösträtt (LKPR) (national association for women’s suffrage) and for a while she was a member of that association’s executive committee.

Perhaps Emilia Broomé’s greatest contribution to society was her role within the Centralförbund för Socialt Arbete (CSA) (central association for social welfare). She was on the board from 1904 to 1925, served as its chair from 1921-1925, and as its bureau director from 1904-1914. Her work resulted in her becoming the first woman in the law-making group in 1914. She worked particularly hard to see that families with children lived in tolerable conditions and she helped to set up several crèches, school kitchens, and holiday camps for school children. She also influenced the CSA’s efforts to set up lecture series and legal advice offices for those in need and she participated in several enquiries into social issues.

Emilia Broomé’s contributions within the socio-political spheres helped her to get elected onto Stockholm city council in 1911 and in 1924. Her main concerns on the council were to improve the living standards for families with children and for single women. Her political convictions are clearly revealed here as she fought for equal opportunities to earn an income and to have tolerable living conditions. In 1914 she became a representative of the Statens arbetslöshetskommission (state unemployment commission), where she remained until 1922. Her work for the state became increasingly demanding as time went on. She presented a proposal for courses for the unemployed, particularly the young, and for how the state and local authorities could work together to solve these issues. She was also the first female commissioner of the Lagberedning (proposed legislation) from 1914 to 1918 and contributed to the development of the new marriage law enacted in 1920 by which married women became legally independent. She particularly enjoyed working with the Lagberedning and she participated in several different state enquiries. As a member of the 1921 wages commission she argued for the principle of equal professional competencies and equal salaries for men and women. This led to the ‘behörighetslag’ (competency law) of 1923 which made several state professions accessible to women. In 1921 she became a member of the board of the Rasbiologiska institute (institute of racial biology).

Emilia Broomé’s political home lay within liberalism and she was extremely active within the liberal party. Her contributions resulted in her becoming the first female member of the party leadership. She had a massive influence on the development of the party’s election campaign for peace and educational issues. She participated in various debates and gave speeches, although she declined the offer of standing as a liberal candidate in the election, despite repeat offers. In 1914 the Förening frisinnade kvinnor (association of liberal women) was established with improving women’s knowledge of political matters their main goal. Women’s suffrage was a top priority. The association was set up by Ada Nilsson and Julia von Sneidern, both doctors, while Emilie Broomé was one of many who campaigned on the matter. In 1917 she became the chair of the association, replacing Ada Nilsson who had held the post since its inception. Although the association was to support the Frisinnad landsförening (national liberal association) Emilia Broomé believed that this had a detrimental impact on their work, particularly with regard to issues of temperance and defence policies. In 1923 she resigned from the association and channelled her political interests into the liberal party which she had been a founder member of.

Her work for female emancipation and women’s rights made Emilia Broomé a role-model, source of inspiration, and mentor for many women. She was also a member of many of the contemporary circles working to promote women’s issues. Anna Whitlock was one of her personal friends, along with Anna Bugge Wicksell and Kerstin Hesselgren, for whom she also served as a mentor. Emilia Broomé’s work was acclaimed by her colleagues, such as justice Birger Ekeberg of the Lagberedning.

The final years of Emilie Broomé’s life were marked by declining health and from the early 1920s she was forced to give up many of her activities. She died in her home in Stockholm on 2 June 1925. She is buried at the Norra cemetery in Solna. 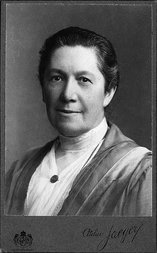