Matilda Jungstedt was an opera and concert singer who was the leading mezzosoprano of her times in Sweden during her twenty-five active years.

Matilda Jungstedt was born in 1864 in Norrköping. She was the seventh and youngest child in an artistically gifted family. Her brother Axel became a well-known portrait and landscape painter. Her father Johan Nikolaus Jungstedt from Stockholm was a customs inspector. Her mother, Mathilda Sundius from Gothenburg, arranged for her to attend a girls’ school and then from the age of 20 to study voice at the music academy (Kungliga Musikkonservatoriet, now Kungliga Musikhögskolan) in Stockholm. Her teacher for four years was the tenor Julius Günther, who had already for several decades taught strictly according to his teacher Manuel García’s doctrines and influenced the style of singing of several generations of opera singers.

After having excelled in a minor role in Boito’s opera Mephistopheles in 1888, Matilda Jungstedt realised that what she had learnt from Günther did not suffice, wherefore she applied to the voice pedagogue and Wagnerian Fritz Arlberg, who taught her to sing legato. She then turned to Signe Hebbe, to learn to act and make herself into a presence. Her teachings were so well adapted by Matilda Jungstedt that she was even able to play purely speaking parts in ordinary plays.

On the occasion of King Oscar II’s sixtieth birthday in 1889, Matilda Jungstedt sang her first great role, that of the Mountain Queen in Ivar Hallström’s national romantic opera Den bergtagna. Before Kungliga Teatern (now Kungliga Operan) could appoint her, she had to make three obligatory debuts. Since her gifts were considered to be suited to the jaunty and comical, she was allotted three boys’ roles: the young Benjamin in Méhul’s Joseph en Égypte, the ridiculous gallant Fredrik in Thomas’s Mignon and the impudent scamp Niklaus in Offenbach’s Les aventures d’Hoffman. In 1889, she was appointed as a soloist and of the ten roles she sang during the 1889/1990 season, Cherubino in Le nozze di Figaro and Nancy in Flotow’s Martha were her best. However, she still considered herself not to be fully trained, so she decided to study further in Paris.

The opera singer and theatre director Emil Alexander Linden, who had been a soloist for three years at Kungliga Teatern, had at the same time decided to continue his voice training with the Spanish baritone Mariano Padilla y Ram in Paris. His singing teacher was married to Mathilda Jungsted’s teacher in Paris, the mezzosoprano Désirée Artôt. Both Swedish pupils met regularly and that led to their marrying in the spring of 1891. After returning home, they sought a common place of work. The opera director Conrad Nordquist at the Stockholm opera was indifferent but the actor August Lindberg welcomed them warmly to his newly-founded opera and operetta company that had rented the Stora Teatern in Gothenburg. In the autumn of 1891, Matilda Jungstedt performed her first Carmen after having sung Azucena in Il trovatore and Leonora in Donizetti’s La Favorite.

Matilda Jungstedt gave her Carmen interpretation a personal though ambivalent image that perhaps mirrored something of herself and that was understood by one critic as ”rather too cold and too little seductive” while his colleague described it as ”demoniacally lovely and with southern heat”. A couple of excerpts remain on record: a duet and a solo. The interesting thing is that instead of the Habanera or the Séguedilla, she chose the ”heavy nordic” Air de cartes.

For four evenings in Stockholm starting in 1892, Matilda Jungstedt sang her Carmen at Kungliga Teatern, the working climate at which turned out to be worse than ever. Nordquist had recently been forced to resign, and his successor, the administrator and court official Axel Burén, still did not dare to sign a contract with her. However, the following autumn, Matilda Jungstedt was back at the Kungliga Teatern as a soloist after having given several concerts and participated in the Swedish opera tour led by her husband.

During Matilda Jungstedt’s longest period, encompassing thirteen seasons beginning in the autumn of 1893, she bore her only child, the artist-to-be Kurt Jungstedt in 1894. The same year, she was awarded Litteris et Artibus medal by King Oscar II after a performance of Orpheus. In 1896, she freshened up her skills with Désirée Artôt in Paris and in 1900 she dissolved her marriage. In 1905, she married Fritz Emanuel Reutersvärd, a landscape painter and director.

As Matilda Jungstedt-Linden, she created four roles in Swedish operas: Rebecka in Andreas Hallén’s Häxfällan , Hervor in Wilhelm Stenhammar’s Tirfing , Margit in Stenhammar’s Gillet på Solhaug and the title role in Wilhelm Peterson-Berger’s Ran. Apart from participating in three speaking plays at Dramatiska teatern, she did not hesitate to accept the Wagner roles of Ortrud in Lohengrin, Magdalena in Die Meistersinger von Nürnberg, Fricka in Das Rheingold and Fricka in Die Walküre at their respective Swedish premieres. Brünnhilde in Die Walküre loomed as the most audacious goal, to try her sustainability in the soprano role with her Arlberg-trained voice. That was achieved in 1904. However, her way of performing Orpheus in 1894 was still the role achievement that laid the foundation for her final elevation to icon status with a shimmer of the legendary around her. It was praised as one of ”the performances most cast in one piece that had ever been given on a Swedish opera stage”, which led to the return of this forgotten Gluck opera to the stage, after many years of neglect. Luckily, three small taste samples have been left by her on gramophone records as gifts: two short arias from the Hades-wandering in the second act, and the inimitable “Che faro senza Euridice” from the third act.

After the spring term of 1906, she resigned in protest because of not having been allotted several more roles than those guaranteed or for having been offered no new and interesting assignments. In the autumn of the same year, she travelled to Germany to try to create an international career for herself. She was engaged to sing Carmen three times at Komische Oper in Berlin. Her achievement met with a friendly but not exactly warm reception. She arrived back in Stockholm after only her second Carmen with a serious throat infection and she spent the time until the summer of 1907 in Stockholm so as to be in form for the three-week long guest appearance as Orpheus in the autumn at Nationaltheatret in Kristiania (now Oslo).

In 1907, she had negotiated with Albert Ranft to play the title role in Franz von Suppé’s operette Boccaccio at Oscarsteatern. After the premiere, she sang the role eighteen times in a row until she reported being indisposed. Since Kungliga Teatern had been handed over to a three-year contract with Albert Ranft since 1908, he brought his foremost artists with him from Oscarsteatern, among them Matilda Jungstedt, who was now to be heard in some of her old roles but also in the new character role as the countess in Tchaikowsky’s Queen of Spades and as old Madelon in André Chénier by Giordano. On her fiftieth birthday in 1914, she terminated her career by surprise by singing her final Carmen among a mountain of flowers on the stage. The year after, in 1915, she was elected a member of the Royal Swedish Academy of Music.

Matilda Jungstedt-Reutersvärd spent her last years in Villa Solhaug in Stocksund where she died in 1923 after a stroke a few days earlier. She lies buried in the Northern Cemetery in Solna. 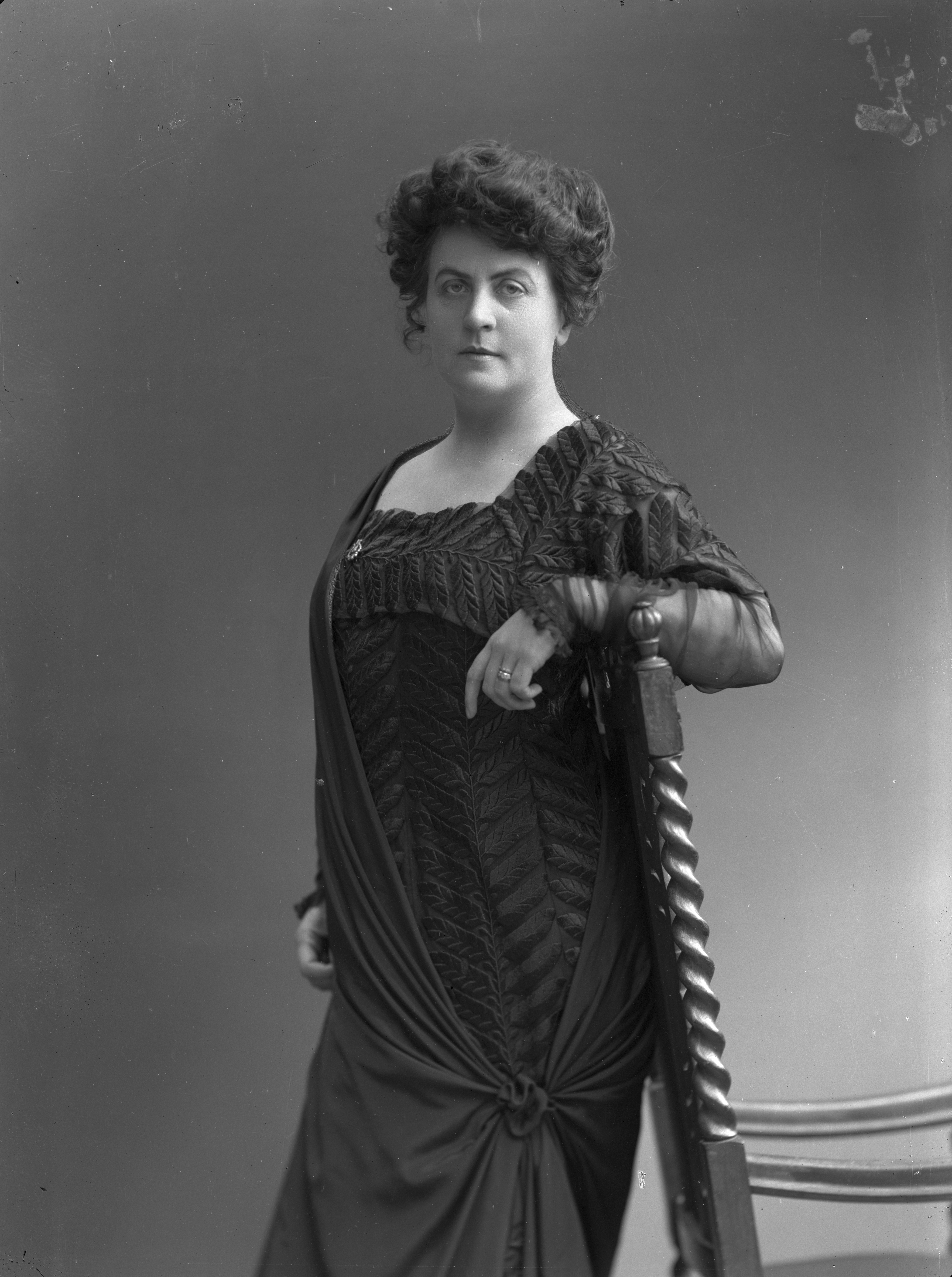