Emilia Fröding was a poet and a writer. She played an important role in her son Gustaf Fröding’s poetry.

Emilia Fröding was born in Lund in 1827. Her father, Carl Adolph Agardh, was the bishop in Karlstad, as well as a professor of botany and economics and a member of two of the Swedish Royal Academies. Her mother, Margaret Lindschough, had only been 16 years old when she got married. She, like her husband, belonged to a respected and wealthy family, and has been described as a down-to-earth person whose life was taken up by managing the household and raising the family’s five children.

Emilia Fröding’s childhood was focused on education. An interest in literature was prevalent within the family home and so, even as a child, she began to use the poetic form to record her life and her reflections on the social injustices she witnessed. Emilia Fröding’s written work expressed her strong interest in women’s emancipation. This was a time when married women were still legally minors. Her poem entitled “Till Sveriges unga kvinnor” describes the social conditions that she and other women, lived under, and the legal, material and psychological status they held, given that they were excluded from all political influence. It is noteworthy that when it came to education Emilia Fröding’s paternal grandparents treated their three daughters equally to their sons, allowing them to be schooled together by tutors. Emilia Fröding’s father was one of the early champions of women’s emancipation of his day.

Emilia Fröding’s early output, still written under the name Emilia Agardh, oozed with vitality. In many of her poems she describes the joy she gained from nature, and how in love she was with Ferdinand Fröding. He was the eldest son of iron-works owner Jan Fröding, who was one of the wealthiest men in Värmland and the owner of the manor farm Alster. Ferdinand was said to be a musically gifted man who had taken singing lessons in Paris and studied art.

The two married in 1852, and moved into a wing of Alster manor. Their first child, Cecilia, was born three years later, followed by two more daughters, Anna and Mathilda. The young couple led a vibrant social life, singing, playing instruments and composing music. Emilia Fröding wrote poems that her husband set to music.

On the death of Ferdinand Fröding’s father in 1858 the couple moved into the main building at Alster manor. Two years later their son Gustaf, their fourth child, was born. At this time Ferdinand Fröding began to face problems with his relatives, and found himself outmanoeuvred by them. The couple, forced out of Alster manor in a way that Emilia Fröding found highly dubious, was forced to change their lifestyle. Her poem “En blick in i framtiden” deals with these events. In it she expresses sadness at having to withdraw from their formerly elevated social and financial status.

Emilia Fröding suffered a deep depression three months after the birth of Gustaf. In the autumn of 1860 she was placed into a rest home in Denmark. She was released in the spring of 1861 and described as cured. The family reunited at the manr farm Byn and Ferdinand and Emilia Fröding attempted to repair their relationship, enjoying a brief respite from their woes. Another child, a daughter name Hedda, was born in 1862. However, in 1865 Ferdinand Fröding became ill, with the result that the family fell on hard times financially and they were forced to move to Lund. Two years later they nevertheless returned to Värmland and settled in Kristinehamn. Once again the family suffered a trial and great sorrow when their 12-year old daughter Anna died following an infection. The loss and sadness that Emilia Fröding experienced following Anna’s death found expression in several of her poems.

A number of Emilia Fröding’s poems also expressed her views on the social standing of women. When she sought to publish her work she was prevented from doing so by her brother, Jakob Agardh. He became very agitated and asked her to “for God’s sake stop prostituting herself and her nearest and dearest”. Emilia Fröding’s contemporaries were not ready for her to express her feelings of how women were subject to an unfair system and forced to live within a legally and intellectually restricted framework. Regardless, she maintained her active interest in women’s emancipation and wrote a letter to her brother, wherein which she wrote: “the way that women’s lives are impacted by their social status and their childhoods could not be more harmful, however the time will come when woman’s place and destiny will be different”.

Despite the opposition she faced, Emilia Fröding was able to publish some of her poetry in the 1870s using the pseudonym of Anna Karlsdotter. Her work appeared in various publications, including Tidens Tecken, Wermlands allehanda, and Förr och nu – illustrerad läsning för hemmet.

Emilia Fröding ensured that her own daughters were schooled. Her youngest daughter, Hedda, became the first Swedish woman to gain a regular qualification from a business school by studying in Gothenburg and graduating in 1884 with excellent marks. Gustaf attended university in Uppsala, where he gained his Bachelor’s degree in Latin and then went on to study politics, successfully completing the course in the spring of 1881. That same year Emilia Fröding was widowed. She then spent a few years enjoying the company of her children albeit she began to worry extensively about their futures. Emilia Fröding dedicated her entire life to her family. She displayed a sense of propriety and psychological strength with regard to supporting members of her family when they fell into difficulties.

When her son Gustaf failed his final attempt to pass his academic degree at Uppsala in 1885 the wider family expressed their contempt and sought to send him into servitude. Emilia Fröding interposed, stating that “Gustaf will end up a remarkable man”. It was at this point that Emilia Fröding would become very significant for the life and works of her son. She gave him support when many tohers turned their backs on him. She engaged with him with the deepest empathy and encouraged him to discover his creative power.

Gustaf and Emilia Fröding began to challenge each other to produce poetry at Slorudsborg in Värmland where they lived with Mathilda, Gustaf’s sister. Together they composed on loose leaves of paper, taking it in turns to read out what they had written. During these sessions, Emilia Fröding imparted a love for the truth and a sense of being open to her son Gustaf, approaches which stemmed from her own thoughts and world-view. What mattered most was not rhyming and metre, but life’s great questions, such as the mystery of good and evil. These were questions which later formed the core of Gustaf’s own poetry.

Emilia Fröding’s bardic school was just one of the preparatory steps for her son’s future existence as a poet. She allowed him to realise that it was through his poems that he would find a way forward for himself. She later clarified this challenge in her poem called “Ordets makt”.

Emilia Fröding documented her life through poetry and was fundamental to Gustaf’s own poetic development. She, however, never lived to see his great success and his eventual recognition as one of the greatest and best-loved poets in Sweden. It was after his mother’s death that Gustaf Fröding threw himself fully into his poetry. In a letter to his sister Cecilia he described how rhymes and metre suddenly came to him: “like a cascade, this I have inherited from her!”.

Emilia Fröding died in 1887. She is buried at Eksjö cemetery. 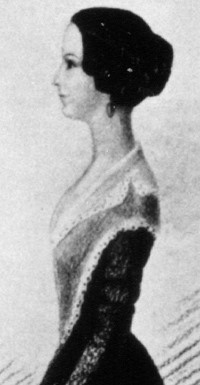