Emilie Högqvist was one of the most popular actors during the romantic era. Her brief and adventurous life has been romanticised in twentieth-century historiography.

Emilie Högqvist was born in Stockholm in 1812. She was born into a poor family tainted by alcoholism and tuberculosis. Her father, Anders Högqvist, was a butler and her mother, Anna Beata Hedwall, was a chambermaid for Count Carl de Geer. From time to time her parents lived apart and in 1832 her father opted to return to his home tracts of Gästrikland. This made the separation permanent albeit the couple never legally got divorced. Emilie Högqvist appears to have already been left to fend for herself as a young child and she never benefited from regular school-attendance.

Emilie Högqvist attended Operans Balettelevskola (the Opera theatre ballet school) between the years of 1821–1826. Her older sister Johanna had previously been a pupil at the school. In addition to the daily training pupils at the school could attend rehearsals at the theatre and sometimes spent performance time in the wings. Occasionally they appeared on stage as extras. Whilst attending the Opera school Emilie Högqvist also worked as an actor at the Anders Selinder children’s theatre, also known as the Oxtorget theatre, at which similar productions to those mounted at Kungliga Teatern were performed but much more simplified in form.

Once Emilie Högqvist had completed her training in the autumn of 1826 she became employed in Anders Petter Berggren’s newly-established theatre company with which she toured the Swedish countryside for two years. During the first year she mainly performed minor roles with few or no spoken lines, but gradually she was given larger roles. She was also able to use her dance training in the “dance-divertissement” which often followed the main performance. Her financial circumstances most likely did not massively improve. In addition to her acting work she also sometimes offered dance lessons by the hour.

Emilie Högqvist returned to Stockholm in 1828 and then found employment as an actor-student at Kungliga Teatern. This meant that she received lessons in singing, music, and recitation but was also called on to perform minor roles. That same year she made her debut as Lotta in Brodertvisten by August von Kotzebue. This performance was mentioned in the Heimdall journal albeit the reviewer felt it was too soon to make a pronouncement regarding her future. Emilie Högqvist performed eight roles in total during 1829. In 1831 her contractual obligation was altered to that of an actress for which she was given an annual salary of 200 ‘riksdaler banco’. Although she received some attention for her acting during her initial period at Kungliga Teatern, she gained far more for her appearance. Despite not achieving a public breakthrough, thanks to her dogged work ethic and a lot of self-directed studying she eventually became popular and was frequently called on to perform within a varied repertoire of productions. She gained her first major success through a 1834 comedy by Eugène Scribe called Qväkaren och dansösen. She had furniture and decorations brought in from her own home and placed on stage for the production which impressed the public. At this time stages tended to be minimally decorated. In this regard Emilie Högqvist contributed to the development of stage scenery at Kungliga Teatern in Stockholm.

During the summer of 1834 Emilie Högqvist went on her first study tour abroad, travelling to London and Paris. Throughout the rest of her life she regularly made foreign trips. Many of the actors and singers she saw on these travels were some of the most talented and well-known actors in Europe. While she was in Paris Emilie Högqvist studied the famous actress Mademoiselle Mars at the Théâtre-Français and made this actress her role-model. Emilie Högqvist also found new plays on her trips which she then had translated and put on at Kungliga Teatern, such as Alfred de Musset’s 1845 En fantasi which actually had its first premiere in Stockholm before the play was performed in Paris.

Emilie Högqvist’s career was revitalised when Kungliga Teatern re-opened following a forced closure during the September 1834 due to the cholera epidemic. It was apparent that all her studies had delivered positive results. Now it was no longer just her appearance or beautiful costumes that gained attention when she was on stage. She was praised for her acting and presented as “one of the most prominent embellishments on stage, in both meanings of the word”. However, she was not totally able to free herself of the low expectations of her abilities. Emilie Högqvist’s weak voice was considered her main obstacle as an actor. Following a lot of effort she managed to give her voice a penetrating and yet slightly muted tone which tended to be considered suitable for comedy.

Emilie Högqvist also trained outside the acting sphere. She learned to write properly and spell correctly, she studied the English, French, German, and Italian languages, she learned etiquette as well as proper behaviour. She thus managed to completely hide her poor background. She recreated herself as a lady who could attend any salon at all despite the fact that many high-society doors were closed to her because she was a courtesan and had given birth to illegitimate children.

Between the years of 1828 and 1845 Emilie Högqvist performed a total of 124 roles at Kungliga Teatern. Her repertoire spanned a range of genres. She appeared in farces and vaudevilles with their accompanying song- and dance-elements including Man kan hvad man vill by Comberousse and Ancelot, French boulevard comedies such as Alexandre Dumas’ Högländaren vid hovet, melodramas by the likes of Kotzebue, plays which today would be called ‘Gothic plays’ such as Stamfrun by Grillparzer, poetic tragedies the likes of Shakespeare’s Hamlet and Romeo and Juliet in blank verse, as well as cross-dressing roles. Emilie Högqvist appeared in several ‘tableaux vivants’ and a couple of times she performed in Mozart’s The Magic Flute in the role of Papagena. Her most successful appearances tended to be in contemporary comedies such as Eugèn Scribe’s Ett glas vatten. She also performed in what was contemporarily known as ‘advanced drama’, namely tragedies. Her greatest success in this genre was the part of Johanna in Friedrich Schiller’s 1836 play Orleanska jungfrun. The January 1837 production was described in the journal Freja as a well-deserved public success which was a moment of “artistic triumph” for Emilie Högqvist. The period during which Emilie Högqvist enjoyed her greatest successes was from 1836 until the early 1840s.

Emilie Högqvist learned to intentionally emphasise her natural beauty, her innocent personality, and to use satirical humour. Her acting was perceived as imbued with an inner and dreamy empathy, viewed at that time as something new. Sensitivity, truth, illusion, and an understanding of her roles were the artistic values used in reference to her and she was particularly careful to control her movements on stage and to give full expression to a silent performance.

Emilie Högqvist enjoyed playing cross-dressing roles in which she bore men’s clothing or played the part of a young man. She brought back Bayard’s and Dumanoir’s short comedy, Richelieus första vapenbragd, from her trip to Paris in the summer of 1839 and it is said that she herself translated it into Swedish. Her appearance in the 1842 production of the play became one of her most popular performances as a young man. These roles allowed her to emphasise her beautiful figure, her humour and vitality whilst also taking the lead in love scenes – which at that time was reserved for the male lead – and tweak the audiences’ imaginations through her slightly transgender sensuality.

Emilie Högqvist’s private life was the subject of contemporary gossip and she was referred to as a courtesan. During her early years as an actor Emilie Högqvist gained both her income and social capital through her affairs with married influential men. In 1833 she had a daughter as a result of a relationship with Bloomfield, the British secretary of legation, but the relationship ended already the following year. She was then courted by the Crown Prince Oscar, the future King Oscar I. This relationship endured, to varying degrees of intensity, for a period of eight to ten years and produced two sons who, following Emilie Högqvist’s death, were brought up by foster parents in Hamburg. She was a much-liked woman who was admired for her empathetic personality and for her great philanthropic generosity, although she was also despised by many due to her personal life and her materialism. During her relationship with the aforenoted Bloomfield she lived at the so-called Masreliez apartment at Salviigränd 1 which can still be seen today. Once she began her relationship with Crown Prince Oscar, in 1836, she then moved into a much discussed tasteful apartment in the Palin building at Gustaf Adolfs torg, directly opposite the royal palace. There she would hold much vaunted literary and musical salons. She spent her summers at her summer house on the Framnäs promontory in Djurgården.

During the first half of the 1840s Emilie Högqvist’s tuberculosis worsened. On 7 December 1845 she delivered her last performance on the stage as Aventurine in Polkan. She then became bed-ridden for six months albeit she subsequently regained enough strength to head off in May in search of a cure. She visited several German and Swiss health spas and then travelled on to Italy. Emilie Högqvist died in Turin in December 1846, aged only 34 years old. She is buried at the Protestant cemetery in that Italian city. Given that all three of her children were registered as fatherless they could not inherit from their mother. Her sole legitimate heir was her brother, himself a former actor, named Jean Högqvist.

In 1847 extracts of Emilie Högqvist’s travel diary that she had kept during her big trip to Italy in 1842–1843 were published. During the second half of the nineteenth century Emilie Högqvist was portrayed in a semi-biographical, semi-fictitious form by the likes of August Blanche, Patric Sturzen-Becker, and Johan Jolin. These works presented her as an angelic and good but fallen woman who deeply regretted her reckless lifestyle. In 1915 Ellen Key published Emilie Högqvist’s letter to her father Emil Key, who had been her final lover. During the first half of the twentieth century several popular biographies were written about Emilie Högqvist while the mythologizing about her life reached its peak in 1939 through the lavish film production Filmen om Emelie Högqvist directed by Gustaf Molander in which Signe Hasso played a visually identical version of Emilie Högqvist. 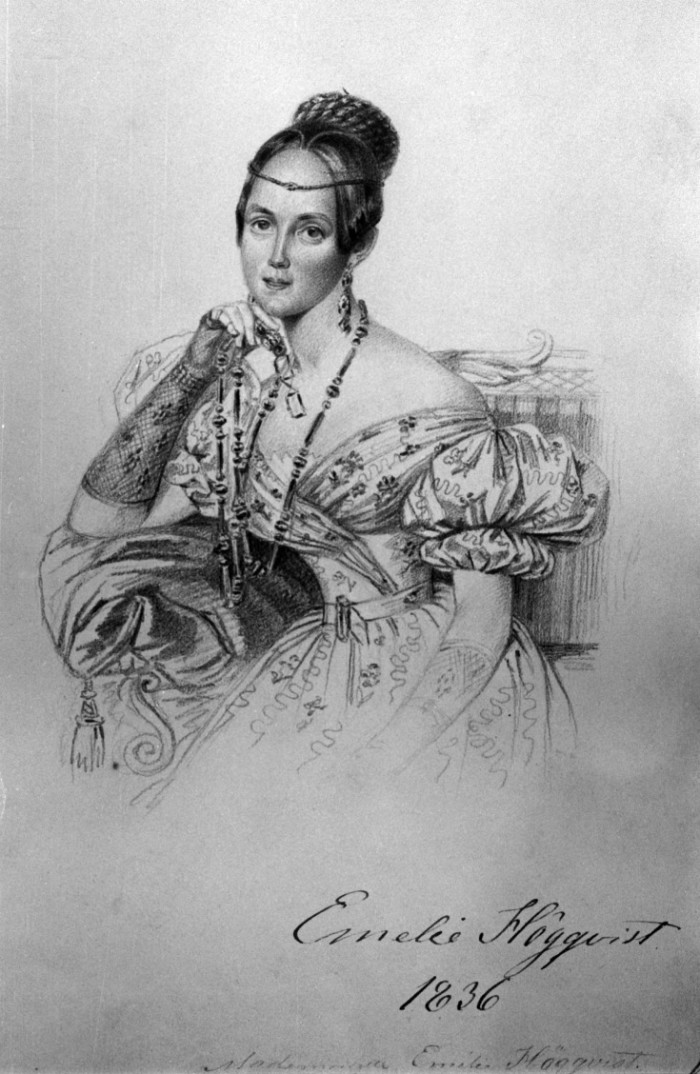