Pauline Brunius was an actor, head of a theatre, and a scriptwriter who was active within the world of theatre and film. She ran the private Oscar theatre, along with John W Brunius and Gösta Ekman and later she was the first woman to become head of the Dramaten theatre.

Pauline Brunius was born in 1881 in the Storkyrkan congregation of Stockholm. She was the daughter of chief constable of police Sven Lindstedt and his wife Maria Charlotta Larsson. It was through her father’s complimentary tickets for second row seats at the Royal Opera and her mother’s interest in music that Pauline Brunius developed her own fascination for the world of drama. She started off as a ballet student at the Opera from 1891–1902, but then made her way to the theatre instead and, from 1899–1902, took private lessons from the actor Lotten Dorsch.

In 1902 she made her stage debut at the Olympia theatre in Stockholm. After having started in a minor part she delivered an “accomplished” performance as Lotte in the operetta Primadonnan. Thereafter she enjoyed a lengthy stage career as an actor at the Östermalm theatre, the Blanche theatre, the Dramatiska theatre, the Svenska theatre and the Vasa theatre. She also took on directing roles at these theatres. From 1926 to 1932 she ran the Oscar theatre, along with Gösta Ekman the elder and John W Brunius, and also worked there as an actor and director.

Pauline Brunius married John W Brunius in 1909. They had a son together named Palle, who later became both an actor and a radio worker, and a daughter called Anne-Marie, who also became an actor. The couple divorced in 1935.

Pauline Brunius was also active with the film world. She appeared in films such as The Markurells of Wadköping in 1931, and Karl Fredrik reigns in 1934. The type of films which she herself directed were of the light-hearted genre, such as De läckra skaldjuren in 1920, and Falska Greta in 1934. She also wrote the scripts for several of her films, such as Ombytta roller in 1920, Lev livet leende in 1921, and Herr Vinners stenåldersdröm in 1924. Olof and Frida Winnerstrand played the lead roles in these films which were shown as trailers before the main feature film at the cinema.

Pauline Brunius had great depth as an actor, performing roles in plays by Molière, Shakespeare, and Hjalmar Bergman. She was adept at playing the role of queen and made a lasting impression when she played comedic parts, for example that of Katharina in The Taming of the Shrew in 1926. Predictably enough Pauline Brunius played the wife of the major at Ekeby in a dramatization of Selma Lagerlöf’s The Saga of Gösta Berling.

Despite Pauline Brunius’ extensive theatrical experience it still came as somewhat of a surprise when she was appointed head of the Dramaten theatre in 1938. She was the first woman to be appointed to the post, where she remained throughout the Second World War right up until 1948, at which point she resigned due to illness. This was a politically sensitive time and Pauline Brunius was criticised for putting on the anti-semitic play Den lilla hovkonserten in 1940 and for undertaking a guest performance – acclaimed in Germany – of Strindberg’s Gustav Vasa at the Schiller theatre in Berlin in 1941. However she was lauded for setting up the new Lilla scenen (small stage) and for her solid support for the touring Riksteatern, established in 1933. Further, Vilhelm Moberg’s play Rid i natt which had anti-Nazi aspects was performed in 1942.

Pauline Brunius died in Stockholm in 1945. She is buried at Galärvarvskyrkogården. 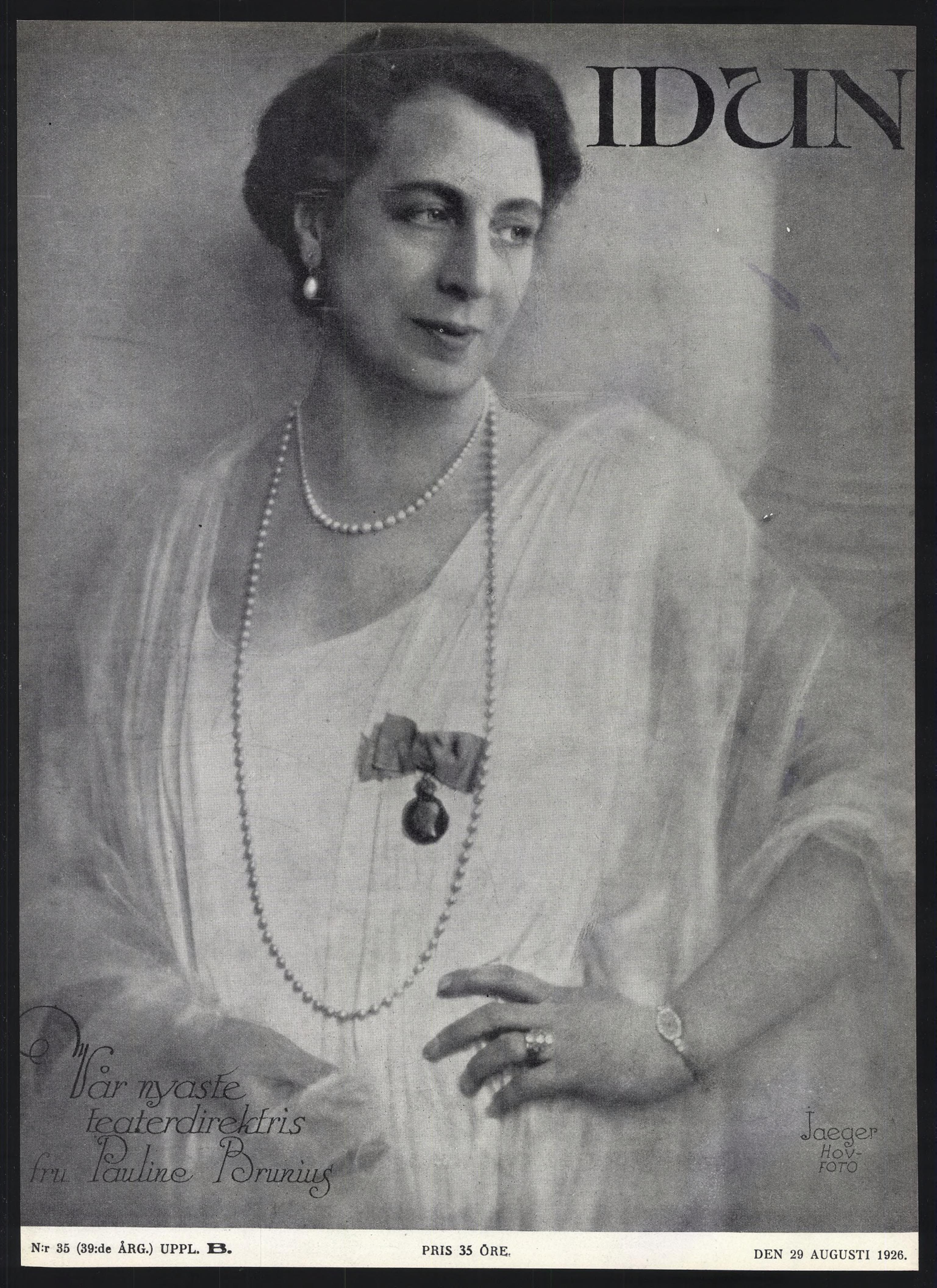