Knitter, inventor of the Lovikka mitten

Erika Aittamaa was born in Junosuando village in Pajala parish in 1866. Her mother tongue was Meänkieli. There is little information on her early years other than that she had five siblings. She later described herself and her family as being poor and it is indeed likely that she grew up in impoverished conditions. She married August Aittamaa and had seven children with him, although only three of them survived into adulthood. Three of them died as children, and one of them as a teenager. Erika Aittamaa was interviewed by a journalist in 1936, when she turned 70, to whom she revealed how difficult it had been to make an adequate living and that one of the ways she had earned extra money was to take commissions for mittens from those who were better-off in the town. The commissioners would bring her wool, which Erika Maittamaa turned into yarn and knitted in return for payment.

Erika Aittamaa was rumoured to be very skilful and in 1892 she was commissioned to make a pair of workman’s mittens. The man who intended to use them was a forestry worker and needed extra thick, warm, and durable mittens. Erika Aittamaa spun the wool into a thick yarn and made two pairs of mittens which she was happy with. She believed they would even last for several winters. However, the man who commissioned them was very unhappy with the result. He found the mittens far too rigid and uncomfortable and felt that she had ruined the wool. This led to new attempts to produce durable and functional workman’s mittens that were suited to forestry work but still remained soft and comfortable. Having knitted a new pair Erika Maittamaa tried to wash them several times in order to then use a carding comb to rough up the outer edge. Eventually she produced a product that was acceptable to all parties and this type of forestry mitten became highly desirable. Orders came in from various villages in Tornedalen and from local Sami populations. The mittens were particularly popular amongst shepherds who transported ore from Kiruna to Haparanda, via Lovikka, which was the village where Erika Aittamaa lived with her family.

Initially the mittens were simply made in one uniform natural colour, that of the original wool, but it was not long before Erika Aittamaa began to embellish the wristlet with brightly coloured embroidery. She believed this was particularly popular with her Sami customer. She also added a bobble at the bottom edge, which allowed the mittens to be hung up and dried out when necessary. This was extent of her additions. The Lovikka mittens were knitted in unwashed wool which was very thick and porous. The weave was loose, and used a pattern for a thumbed mitten which had a folded-down wristlet. The mittens were then washed in order to shrink them and make them tight-fitting, and then the outer edges were roughed up with carding combs. The final stage involved embroidering the wristlet in bright colours. This embroidery helped to pull the edges tight and improved the neat fit around the wrist.

The Lovikka mittens quickly became known in ever-increasing circles and demand for them grew. The Aittamaa family finances greatly benefited from the profits made from mitten production. Erika Aittamaa continued knitting mittens all year round and trained local women in the village to knit them and then employed them in order to meet the demand. She apparently set very high standards as she was determined that each mitten should be knitted and embroidered identically. She thus became a mitten producer who was able to deliver in accordance with demand.

In the 1930s one of the local village teachers helped Erika Aittamaa to take out a patent for the Lovikka mitten. She was successfully awarded the patent but it cost 30 kroner to obtain the patent letter and Erika Aittamaa did not have that much money. Even though the local villagers collected money on her behalf she was too proud to accept their donations. The patent letter had to be returned and thus she never gained her patent. She expressed the same pride in the interview she gave on her 70th birthday when she said: “God pointed me in the right direction and I helped myself so that we could bring up our children without relying on help from others.”

Erika Aittamaa was widowed in 1942. Following her death, in 1952, the local villagers continued to knit the mittens and in 1961 the housewives’ association registered the Lovikka mittens as a trademark. This trademark represents hand-knitted mittens made according to Erika Aittamaa’s pattern. They then became associated with winter sports, namely skiing and sledging, instead of the traditional forestry worker and Sami connections. The Lovikka mitten remains (in 2017) a well-known product and in order to commemorate Erika Aittamaa’s invention a giant mitten has been erected in front of Lovikka school. The mittens were also represented on Swedish stamps in 1998. 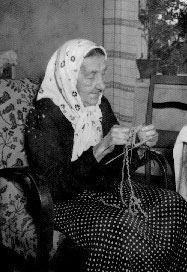