Esther Gehlin was a very productive artist, particularly within the sphere of painting in which she mainly created still lifes, portraits, and landscape paintings. During the 1940s she became a pioneer in textile arts through her appliqués.

Esther Gehlin was born in 1892. She grew up in Copenhagen in a middle-class family of Jewish descent, which had been living in Denmark since the 18th century. Her father, Michael Emil Martin Henriques, was a textile manufacturer who set up Malmö Mekaniska Tricotfabriks AB (MMT) in 1892. He became a part-owner of Henriques & Løvengreens Trikotagefabrikker A/S in 1897 when a factory was established in Fredriksberg in Copenhagen. The great demand for tricot products led to the Henriques family becoming very wealthy. Several of the Henriques family members had artistic careers, including Esther Gehlin’s uncle, the composer Fini Henriques, and the artist Marie Henriques.

Esther Gehlin enrolled on her first artistic training course when she was 16, at Det Tekniske Selskabs Skole in Copenhagen. From 1911 to 1915 she studied at Kunstakademiet in Copenhagen, and, during her first year as a student, participated in an exhibition held at Kleis’ Kunsthandel, also in Copenhagen, which was organised by Foreningen Ung Kunst. During her studies and shortly thereafter she participated in Kunstnerernes efteraarsudstilling in Copenhagen, and in 1917 she held her own solo exhibition. While she was a student she undertook several trips to various places including Paris, Dresden, and Berlin.

On 1 June 1917 Esther Gehlin married the Swedish artist Hugo Gehlin. He had been living in Copenhagen since 1915 in order to study and work there. After the First World War the couple travelled to Italy on a yearlong study and work trip. They spent time in Assisi and Ravenna, amongst other places. In 1921 Esther Gehlin and her husband held their first joint exhibition at Gummeson art gallery in Stockholm. A series of exhibitions followed at various museums, art galleries and art sellers’. In January 1939 Esther Gehlin held a retrospective exhibition at Konstnärshuset in Stockholm, displaying about 100 pieces of her work dating from 1911 onwards. Another retrospective exhibition was held in 1942 at Vikingsberg art museum in Helsingborg.

In 1922 Esther Gehlin and her husband settled in Helsingborg, initially at the Raus plantation south of the city, and then, from 1925 onwards, in a villa near the heights of S:t Clementsgatan in central Helsingborg. Hugo Gehlin took a job as a drawing instructor in order to make ends meet. Before settling in Helsingborg the couple had spent a period of time in Lidingö, where Hugo had been a teacher, followed by a stint at Nääs handicrafts training programme. However, both Esther and Hugo Gehlin longed to be active as artists and this was made possible through financial support from the Henriques family, which lasted until the early 1940s.

The Gehlins became established within the artistic and cultural circle of Helsingborg. During their time at Raus plantation they socialised with Birger Sjöberg and the locally famous music director Hjalmar Johansson, amongst others. Their long term home at S:t Clementsgatan became a meeting point for Helsingborg’s rather small circle of artists, journalists, authors, and actors. During the war years Esther Gehlin’s relatives also stayed with them when the situation in occupied Denmark had become untenable and dangerous for those of Jewish descent.

The couple had their studios in their villa. Hugo Gehlin worked with a variety of different materials whilst Esther Gehlin spent several decades solely painting. She worked in both water colours and oils, and produced portraits, still lifes, and landscape paintings. Her motifs tended to be objects and phenomena which could be found close to home, which is why Esther Gehlin’s art reveals other sides of Helsingborg than the usual depictions of the town. The physical location of her home, within part of Helsingborg’s dramatic topography, was an excellent starting point. She had a view across the port silos, as well as gardens and fire gables which appeared when the trees were bare, and these motifs recur in several of her paintings. The family also had a small summer house near Skäret on the north side of Kullaberg and the surrounding landscape inspired many of her works, as did the surroundings of her parents’ summer house Nirvana at Mørdrup, south of Elsinore. Esther Gehlin also painted portraits, often of family members or people within their social network in Helsingborg, such as their neighbour Ebba Laurin and the actor Lena Cederström. Helsingborg Gummifabrik (rubber factory) commissioned Esther Gehlin to design toys out of rubber, but the production was hit by rubber shortages during the war.

Esther Gehlin generally received favourable reviews, with her still lifes particularly attracting acclaim. Reviews of her work include expressions like “refined painter”, and she has been termed a “spontaneous colourist”. At the end of the 1930s Esther Gehlin began to work with textile appliqués, using biblical stories as her motifs, such as Dansen kring guldkalven, 1946, Moseslegenden, 1947, and Joseflegenden, 1948. She displayed her appliqués at an exhibition organised in the spring of 1946 by Svenska Slöjdföreningen in Malmö for which Gotthard Johansson gave her favourable reviews. Her Hamburgs brand, 1944, depicted the dramatic bombings of Hamburg during the summer of 1943 in which it is believed that more than 40,000 people died. Her last textile appliqué was entitled Caritas. Folke Bernadotte in memoriam, dated 1948-1949, in which she interpreted the murder of Folke Bernadotte and the refugee situation in Palestine. In this piece she revealed her interest in and artistic interpretation of current cataclysmic events which had not previously featured in her paintings.

Esther Gehlin’s only public artwork consists of two appliqués created for the Gustav Adolf parish home, an altar cloth and a wall hanging for a smaller wedding room. The building, which was opened in 1942, had been designed by the architect Arvid Fuhre, who was a friend the Gehlins’. Hugo Gehlin also contributed artistic elements in the building. The altar cloth has been in the Gustav Adolf church in Helsingborg since 2016.

An inventory of works that Esther Gehlin herself compiled towards the end of her life, which is stored in the archives of Helsingborg museum, lists 274 pieces, the majority of them oil paintings, and 14 appliqués. Esther Gehlin’s work can be seen at Nationalmuseum, Modern museet, Malmö Konstmuseum and museums in Helsingborg.

Towards the end of the 1940s Esther Gehlin began to suffer from several illnesses and she died in October 1949. She is buried at Raus cemetery in Helsingborg. Esther Gehlin would have turned 60 in 1952. That year a memorial exhibition was held at Vikingsberg art museum in Helsingborg. 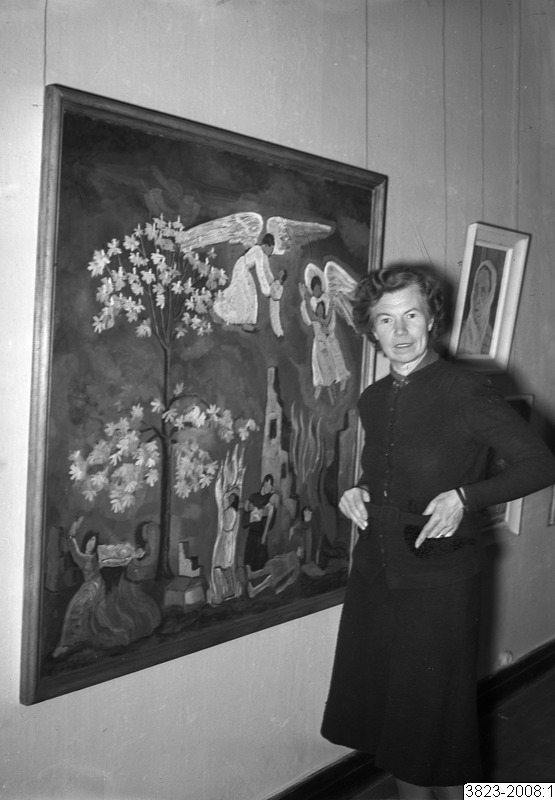