Eva Andén was a lawyer, solicitor and the first female member of Sveriges advokatsamfund (the Swedish Bar Association). Throughout her life she worked to improve the legal provisions for women, children and the poor.

Eva Andén was born and brought up in Uppsala. Her father was a grocer and her mother was a housewife. Eva Andén was scholastically gifted and was given the opportunity to gain an education. She graduated from high school in Uppsala in 1906 and continued her studies at Uppsala University, where she read history, the history of literature and political economics. In the autumn term of 1907 she began to study law. Eva Andén was the sole woman among her fellow students. One of her teachers, however, was the female legal pioneer and reader in civil law Elsa Eschelsson. During her time studying law Eva Andén was active in Kvinnliga Studentföreningen (the female student association) at Uppsala. There she fought for, amongst other things, Elsa Eschelsson’s right to become a professor of civil law, something which never came to pass. In 1912 Eva Andén sat her Bachelor of Law exam.

Eva Andén had already become deeply engaged in women’s issues as a student. As a newly qualified lawyer she spent 1912—1913 travelling around Sweden running courses in legal knowledge which were organized for rural women by Landsföreningen för kvinnans politiska rösträtt (LKPR: the national association for women’s suffrage). Eva Andén also gave popular science lectures in different contexts across the nation on the subject of marriage-, childcare-, and poor relief laws. Eva Andén was a frequent contributor to women’s journals such as Tidervaret, Rösträtt för kvinnor, Hertha, and Morgonbris in which she would write about legal issues such as abortion, prostitution, marriage and inheritance. The articles were frequently aimed at informing women of their rights within marriage and of important reforms and developments in marriage- and inheritance-laws. Eva Andén used to herself say that her motto was “Fri käft” (“Free mouth”) meaning that she was free to say and think what she wanted to in all situations. Upon completing her studies at Uppsala Eva Andén began to work as a lawyer. This was no simple matter at the time as women did not, for example, have the right to sit in court or to be employed as a judge. However, the regional governor of Falun, Ernst Laurentius Alinder, allowed Eva Andén to serve as notary at the sentencing-office in Falun during the years 1913-14, causing a lot of consternation not only in the legal world but also among the general public.

Following her time in Falun Eva Andén wanted to continue practising law and moved to Stockholm. As the 1809 constitution excluded women from a range of professions within state service, such as judges and university teachers, Eva Andén instead focused on establishing a career as a solicitor. In contrast to many other legal lines in the early 1900s there were no regulatory charters in the Swedish Bar Association which prevented women from seeking admission to it, and the role of solicitor became a safe position for many female lawyers who wanted to put their legal knowledge into practise. Eva Andén approached the secretary of the Association, Johan Tjerneld, seeking to find a lawyer’s agency which would allow her to practise. She got a one-year post at Tjerneld’s own agency in Stockholm which he ran together with the solicitor Ivar Morssing. The work that Eva Andén was able to carry out through the agency included serving as a counsel for the Stockholm magistrates’ court.

In the autumn of 1915 Eva Andén set up her own business as a solicitor through taking over the agency Kvinnliga Juridiska Byrån on Wallingatan in Stockholm. The agency had been established in 1904 by Anna Pettersson, who despite having received no formal legal training still had several years’ experience of practising law. On 14 March 1918 Eva Andén became the first female member of the Swedish Bar Association. After being admitted as a member the name of her agency was changed to Eva Andén’s Advokatbyrå. In 1919 Mathilda Staël von Holstein became her business partner. She subsequently became Sweden’s second female solicitor. In 1923 Eva Andén set up another solicitor’s agency in an office on Norrlandsgatan in Stockholm.

As a solicitor Eva Andén was most active within the sphere of family law, which at that time was undergoing several important changes and reforms. Eva Andén played a major role in the development of family law in the 1900s as a member of the committee which served as the Bar Association’s consultation body for family law legislation. In March 1917 Eva Andén was invited into the second chamber of parliament to present her views on a proposed law on the legal provisions for illegitimate children. At the same time several other laws were introduced which improved children’s rights in various ways, including the 1917 adoption law. During the 1910s and 1920s several new inheritance- and testamentary-laws were also introduced in which the provision of inheritance rights for illegitimate children were improved. Eva Andén also undertook work to modernize marriage law with better provisions for married women. A law of this type was introduced in 1921 when the new marriage code came into effect.

Eva Andén was often employed as a legal representative in cases involving issues of family law, such as divorces, inheritance and guardianship disputes. Many of her clients were women, including the famous such as Barbro Alving, Selma Lagerlöf (Eva Andén handled the Mårbacka foundation) and Astrid Lindgren. Eva Andén helped Astrid Lindgren (then Ericsson) in connection with a much-discussed trial in Vimmerby in the second half of the 1920s. The case concerned the divorce of Reinhold Blomberg and his wife Olivia. Blomberg and Astrid Lindgren had an affair at a time when Blomberg, although separated from his wife, was still officially married. By the time of the trial Astrid was pregnant. Had it become known that Blomberg had been unfaithful during his marriage, he would suffer less favourable terms in the imminent divorce. Therefore, in 1926 Eva Andén helped the young and unmarried Astrid Lindgren to travel to Rigshospitalet in Copenhagen to give birth in secret. This was the only hospital in Scandinavia where women were not required to provide either their own or the father’s name at the birth. It was precisely this type of case, with women falling into difficulties of various kinds, which frequently cropped up at Eva Andén’s solicitor’s agency. Whenever possible, her aim as a solicitor was to have warring parties come to an agreement in order to avoid a trial. It was not uncommon for her to refuse payment when her clients were short of money. Eva Andén never retired but continued to work right up until her death. Her solicitor’s agency continued to be in operation until 1995.

Eva Andén had a large circle of private friends which included Aleksandra Kollontaj, Karolina Widerström and Ellen Fries. She never married but for long periods of time shared her home with her colleague Lisa Ekedahl. Eva Andén was active in several women’s organizations throughout her life. She was also admitted to Samfundet de Nio (the Nine Society) in 1940 and was the society’s chairperson from 1950-62.

Eva Andén died in 1970 and is buried at the Old Cemetery in Uppsala. 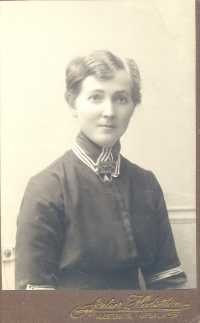