Eva Fryxell was a literary critic, an author, and an artist. She was also an active member of the women’s movement.

Eva Fryxell was born in Stockholm on 15 January 1829. Her parents were Julia Lagergren and Anders Fryxell. Her father was a priest who was also an author, the founder of a school, and a historian. Her father played an important role in Eva Fryxell’s future career. When she was seven years old she began to attend Wallinska skolan, the school her father had set up. However, she only attended that school briefly as the family moved to Värmland in 1836 following Anders Fryxell’s appointment as priest in Sunne. After the move Eva Fryxell and her younger sisters were home-schooled. This schooling included playing an active role in family finances. At the age of 14 Eva Fryxell became responsible for managing the household bills, albeit under her father’s watchful eyes. Eventually she was even given her own petty cash to use for purchasing clothes and such like.

During this period her mother fell ill and was no longer able to play an equal role in bringing up the children. Eva Fryxell, then 19 years old, became responsible for running the parsonage, which involved major agricultural activities as well as a sizeable household comprising 22 individuals. Finances were tight but she ran things to the best of her ability. During the evenings the family would gather at the parsonage to read, keeping themselves well-updated on the latest literature and world events through the daily press. Eva Fryxell’s literary interests emerged at an early age and only increased over the years.

When Anders Fryxell gained a sabbatical from his church duties in order to dedicate himself to writing it was Eva Fryxell who became his assistant. He headed off on several research trips to Denmark, Germany, Poland, and Austria and Eva Fryxell, who threw herself into his work, served as his permanent sounding board. Following her mother’s death in 1868 the family again spent a lot of time in Stockholm. After the death of Anders Fryxell in 1881 Eva Fryxell published aspects of his work including: Bidrag till Sveriges historia efter 1772 and Min historias historia. En autobiografisk uppsats, in 1884. Eva Fryxell penned the foreword to each book.

After her father’s passing Eva Fryxell now had time to work on her own writing. However, no one knew that since 1862 she had been writing critical articles published in Tidskrift för hemmet under the pseudonym of Edmund Gammal. Neither the journal editors nor Eva Fryxell’s closest friends knew who was behind the pseudonym and she maintained her anonymity for a long time. Her first article in Tidskrift för hemmet is entitled “Bref till Lea” and in it Eva Fryxell played the part of an older gentleman. She used powerful masculine language which she would not have been able to get published as a woman at that time. Her alternative persona of Edmund Gammal was influenced by logic and reason and in this her role model was, doubtless, her father, Anders Fryxell.

In 1880 Eva Fryxell published Kvinnofrågan: jämförelser mellan de tre stora kulturfolkens nutidsåsikter rörande könens psykiska och sociala ställning using the same pseudonym. Here she compared the perspective on women expressed in academic and literary texts in Germany, France and in Great Britain. Eva Fryxell never accepted the theories of male predecessors without closely examining their attitudes towards women. This book, along with Omstörtning eller utveckling, 1886, are seen as her most important works. Omstörtning eller utveckling was published under the pseudonym of F. A. Ek and served as Eva Fryxell’s contribution to the morality debate in which she championed man’s free will. Eva Fryxell also used two other pseudonyms in addition to Edmund Gammal and F. A. Ek, namely those of Per Trygg and Teodor Frid.

In 1893 a difference of opinion arose between Eva Fryxell and Ellen Key. This time Eva Fryxell engaged using her real name and criticised Ellen Key for having exploited Anne Charlotte Leffler and her efforts in order to promote her own ideas. Ellen Key responded with an input that was three times as long and resulted in another two articles. The dispute began with a discussion of literature and female writers but ended up dealing with wider issues of human perspectives and the relationship between the sexes. A few years later a protest, signed by 284 women, was published which criticised Ellen Key for having claimed to represent all of Sweden’s women in a speech. Eva Fryxell, Lydia Wahlström, Anna Hierta-Retzius and many prominent women from the women’s movement were amongst the petition signatories.

As a well-to-do woman Eva Fryxell did not have to work for her living. She was thus able to dedicate much of her time to writing and to various associations. Amongst other things she served as secretary of Föreningen för Stockholms läsesalong (Stockholm reading room association) and she was active in Adresskontoren för arbeterskor which organised jobs for unemployed women. Eva Fryxell was also active in the temperance movement, becoming an early member of Blå Bandet (blue ribbon) and, as soon as Vita Bandet (white ribbon) was set up in Stockholm, she signed up at the organisation’s Östermalm-based section, within which she was one of the most active members. Even after she turned 70 years old Eva Fryxell regularly attended meetings and participated in discussions. She was described as both the oldest and liveliest of members. Her desk-based engagement remained strong and she wrote several articles for the daily press and journals on the temperance movement and related issues.

In addition to her writing output Eva Fryxell was also an amateur artist. One of her oil paintings from 1852, depicting the salon at Sunne parsonage, is included in the Mårbacka collection. In earlier times Eva Fryxell was described as both youthful and enthusiastic. When she turned 75 years old she was properly fêted at Hotel Phoenix in Stockholm. All the guests were women and several of them gave speeches. One of the event organisers was Anna Hierta-Retzius, who also gave a heartfelt speech in honour of her friend which was subsequently published in its entirety in the Dagny magazine. Eva Fryxell’s decision not to marry was noted, as was her rejection of several male suitors: “However the women’s movement probably benefited as a result and so we should not complain today. By making that decision you instead had time to act for the benefit of the many instead of the one.”

The speech also recounted her many achievements, both as an author and as an active member of associations. Indeed, her sister Mathilda Fryxell, who was similarly active within the temperance movement, was also highlighted. All the major newspapers reported on Eva Fryxell’s birthday. Indeed, five years later on her 80th birthday, she appeared on the cover of Idun magazine both in person and through her words.

Eva Fryxell spent her final winters at her home on Drottninggatan in Stockholm which had an office with bookladen bookshelves adorning its walls. She spent her summers at a cottage in Sandhamn where she could enjoy nature and gardening. She acknowledged that she had the best of both worlds.

Eva Fryxell died in Stockholm on 31 March 1920. She is buried at Sunne cemetery. 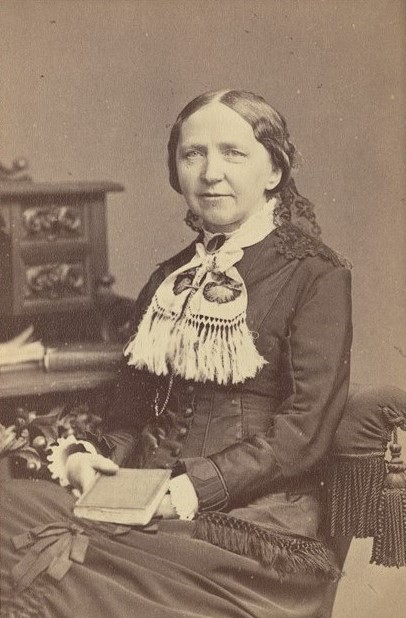