Eva Nordenson was an art-historian who worked both as a museum curator and as a museum director.

Eva Wilhelmina Nordenson was born in Uppsala on 7 December 1925. She was the daughter of Carl Cederblad, researcher and public educator, and his wife Emy Cederblad née Sandell, a physiotherapist. Public education was held up as an ideal in Eva Nordenson’s family, which also had a certain artistic heritage. She was the great-grandchild of Olof Hermelin the landscape painter. Indeed, famous Uppsala sculptor Bror Hjort also produced several portraits of her, adding to her interest in art.

After graduating from the humanist programme at Uppsala högre allmänna läroverk in 1945 Eva Nordenson then registered at Uppsala university to begin her undergraduate studies. In 1962 she gained her licentiate degree in art history at Stockholm university, having written a thesis entitled En studie av Rörstrandsfabrikens fajansmönster åren 1726–1750.

In 1949 Eva Nordenson married Ulf Nordenson. The couple then moved to Kalmar, where their eldest daughter Magdalena was born. From 1950–1952 Eva Nordenson was temporarily employed at Kalmar museum of art. In 1953 the family moved to Stockholm and then later on to Lidingö where another two children were born into the family, namely their sons Jacob and Per. Ulf and Eva Nordenson divorced in 1965.

Eva Nordenson’s professional career was primarily influenced by the art history studies she undertook with Gregor Paulsson at Uppsala. He considered art to be part of culture and society and focused on the contemporary era. He was also a cultural radical who harboured innovative ideas regarding the role of museums. After the Second World War ended he took his students on trips across war-ravaged Europe. A trip to Italy in 1947 gave most of the travellers their first, never-to-be forgotten exposure to great art. Gregor Paulsson’s wife, Ester Paulsson, and her sister Elin Wägner were also on this trip to Italy. Like many of Gregor Paulsson’s students – including Bengt Dahlbäck, Pontus Grate, and Per Bjurström – Eva Nordenson ended up working at Stockholm National museum. She was there from 1953 until 1977, initially as a curator of the applied arts section.

During the war years the Stockholm National museum collections had been evacuated, primarily to Skansenberget. This led to a major operation in the early 1950s to return the items to the museum building. Eva Nordenson’s task was to pack the applied art items and inventory them and photograph them. A clearly delineated employee hierarchy was in force at Stockholm National museum during the 1950s. Eva Nordenson’s mentor was initially an older female colleague named Gertrud Serner whose various duties included mobile exhibits. She took Eva Nordenson on to produce text for the catalogue to accompany the 1954 mobile exhibit entitled Svensk Jugend.

During the 1960s Eva Nordenson shared her post as curator of Konsthantverksavdelningen (applied arts section) with a newly-appointed female academic, Ann-Sofi Topelius. The head of that section was Dag Widman. During the ensuing decade Eva Nordenson worked on several of the museum’s much-noted international exhibitions, especially Konstskatter från Dresden in 1969 which coincided with the end of the Prague Spring and led to Stockholm National museum being able to borrow a large amount of artwork. Bengt Dahlbäck was behind this initiative and acted as main commissioner of the exhibition whilst Eva Nordenson and her colleague Per Bjurström travelled to Dresden in order to select the items that were to be displayed. Eva Nordenson often recounted her memories of this eventful trip to the still heavily war-damaged city. The exhibition generated a lot of attention in Stockholm. Per Bjurström was responsible for the exhibition catalogue whilst Eva Nordenson was responsible for the displays.

Eva Nordenson was also involved in exhibitions such as Dansk guldålder in 1964, Höjdpunkter i norsk konst in 1968, and Finskt in 1971. However she was primarily engaged in pioneering efforts within museum education. From 1969 she was head of museum education and she created an entirely new enterprise which placed great importance on spoken communication and other teaching aides to be used to attract the attention of the public.

Eva Nordenson left Stockholm National museum in 1977 to take up the post of director at Kulturhistoriska Museet in Lund, where she remained until 1982. From 1983 right up to her retirement in 1991 Eva Nordenson was the director of the outdoor museum Skansen in Stockholm. During her time a new clothing warehouse and a series of culturally protected buildings were opened, including a re-created town area, encompassing a carpenter’s workshop as well as a mechanical workshop.

In 1991 Eva Nordenson was appointed chair of Gustavianska parken committee. In collaboration with Sture Koinberg, a landscape architect, she put forward a proposal for developing the landscape surrounding Brunnsviken to provide a ‘green lung’ in Stockholm. The proposal, which it was hoped would influence the views of politicians and planners, was presented at Konstakademien (academy of art) and contributed to the parliament’s decision in 1994 to protect Djurgården, Haga Brunnsviken and Ulriksdal and recognise them as the first national city park in Sweden.

In 1995 Eva Nordenson received an honorary doctorate from Uppsala university and in 2003 she was given the Royal Patriotic Society’s annual Gösta Berg medal. Eva Nordenson’s book Mitt förtjusta öga. : J.C. Linnerhielms voyages pittoresques i Sverige 1787–1807 was published in 2008.

Eva Nordenson died on 11 June 2014 and is buried at Lidingö cemetery. 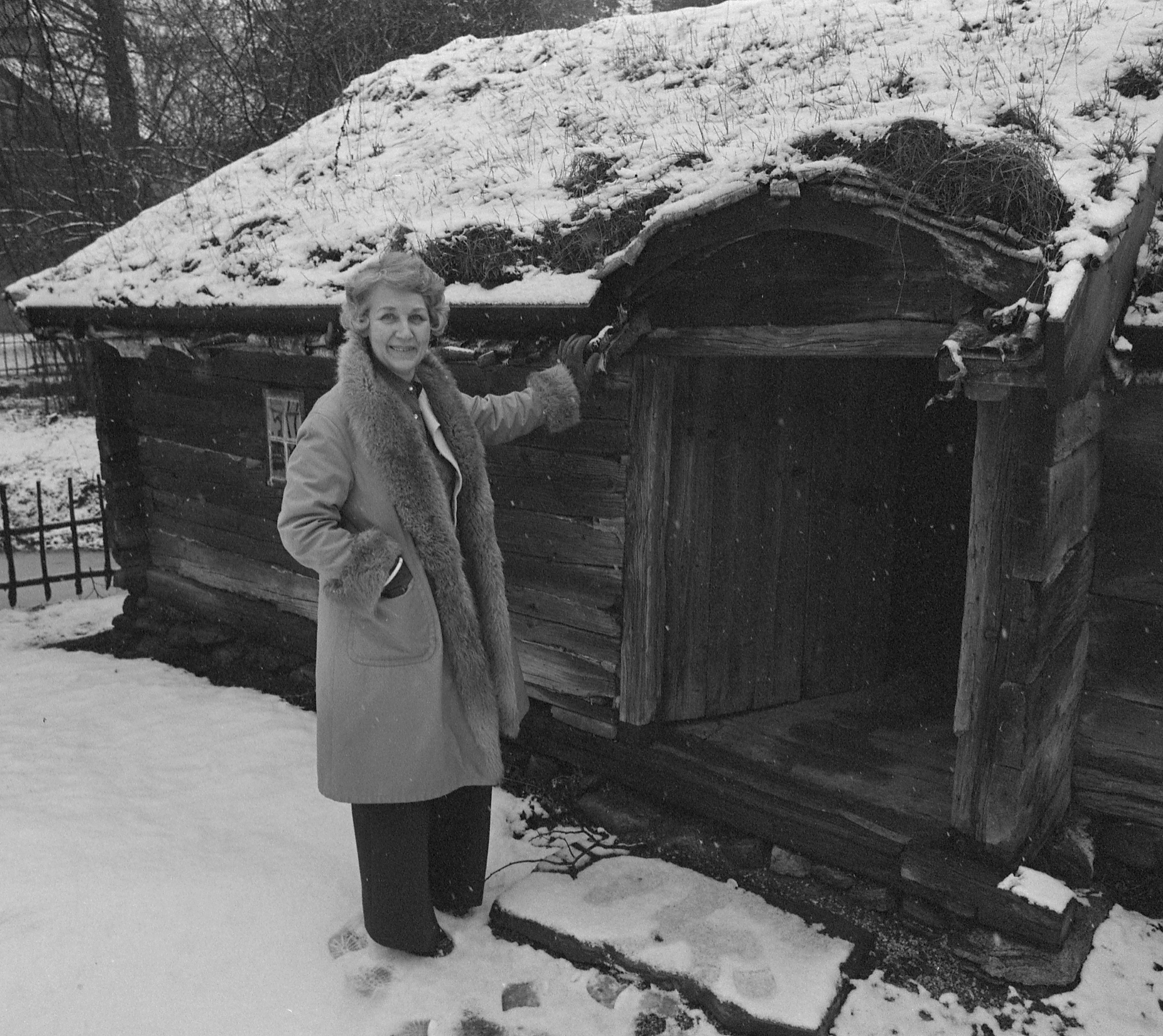