Anna Fredrika Ehrenborg was an author and a preacher, who spread Emanuel Swedenborg’s teachings in particular. She was a strong-willed and distinctive individual who moved within the cultural circles of mid-1800s Sweden. Her voluminous publications centred on child-rearing matters and religious tracts.

Fredrika Ehrenborg was born in Karlstad in 1794. Her father, a merchant called Nils Carlqvist, died young leaving her mother in a precarious financial position struggling to provide for the family. Thus Fredrika Ehrenborg ended up living with a foster family. Her surroundings there were meagre and harsh, as is apparent in her autobiography that she published in the final year of her life. It was through her foster family that Fredrika Ehrenborg met Casper Ehrenborg, a young lawyer, and in 1811 the two of them married. Casper Ehrenborg’s genteel background awakened feelings of inferiority in Fredrika Ehrenborg. She believed she lacked education, although she gained opportunities to developer her abilities during her happy marriage. She gave birth to eight children during her twelve-year long marriage, four of which survived into adulthood, including the author and translator Betty Ehrenborg-Posse.

Casper Ehrenborg was promoted to county secretary and vice-governor of Skaraborg county. The family residences were initially Råbäck on the side of Kinnekulle, and then at Kråk manor beside lake Vättern. Now and again Casper Ehrenborg had to travel to Stockholm for work and it was during one of those journeys that he died, just after having been appointed parliamentary ombudsman. Losing her husband in 1823 decisively impacted on Fredrika Ehrenborg’s future. She took an interest in the works of Swedenborg which formed part of her husband’s library in evidence of his spiritual interests. She energetically threw herself into Swedenborgianism which had already found a home amongst some of the clergy in Skara diocese. Swedenborg’s version of Christianity led to an inner awakening for Fredrika Ehrenborg. The Swedenborgian emphasis on the connection between heaven and earth suited her the mourning experience she was undergoing.

The widowed Fredrika Ehrenborg and her four children moved in a Skaraborg social circle comprising land-owners and followers of Swedenborg. Her familiars included the Gyllenhaals, Schönherrs, and Odhners. She focused primarily on rearing her family. Her novel 1845 Skildringar ur det husliga lifvet includes a chapter on the girls’ school run by the dean’s wife which taught a course on rearing country girls.

The Råbäck property was sold in 1830 and the family then moved to Kråk. There Fredrika Ehrenborg took the young romanticist Ernst Kjellander, who would later die young, under her wing. Her daughters Anne-Beate and Ulla went on to marry men who worked in the civil service. When her son, Richard, enrolled at Uppsala she and her daughter Betty accompanied him to the university town, where they lived from 1842-1846. Richard later became a factory owner at Bohr estate and a parliamentary representative, whilst Betty became a well-known religious preacher, hymn-writer, and founder of Sunday schools.

Fredrika Ehrenborg landed – like some alien bird – on the scene of the Uppsala romanticist salon involving Malla Silfverstolpe and her circle just as it began to decline. Fredrika Ehrenborg apparently played a significant role in persuading the top-end of society to establish the Fruntimmersförening för barnavård (women’s association for childcare) in 1845. The ideas behind the association were taken from Fredrika Bremer’s 1843 appeal in Aftonbladet. Fredrika Ehrenborg’s strong social interests were sometimes seen as demanding and moralising. Her friendship with the Hamilton family at Hönsäter near Kinnekulle came to serve as an important point of contact between Västergötland and Uppsala.

She released a follow-up to the 1845 publication the next year, but it does not sit well amongst the ordinary branch of novels which were being developed by the triad of Fredrika Bremer, Sophie von Knorring, and Emilie Flygare-Carlén. Fredrika Ehrenborg did not understand the opportunities fiction offered, and instead she ruined her writing through an over-reliance on didactics. She was advised to start writing for children instead. She tried to find an appropriate manner of expression in her collection entitled Läsning för barn, from 1846-1849, which took the form of children’s morality tales.

In 1846 Fredrika Ehrenborg moved in with her daughter and son-in-law in Lund. This led to an important change in her life. The ecclesiastical atmosphere of the town suited her spiritual search better than that of cooler Uppsala. In Lund she became influenced by Reuterdahl, Thomander, Fjellstedt, and Wieselgren. Her son-in-law, Professor E.G. Bring, who was a follower of Schartau, was inclined towards the high church Lutheranism. Her daughter, Betty, tended toward the revivalism of Rosenius. Fredrika Ehrenborg, however, remained true to Swedenborg. As a Swedenborgian preacher she found a colleague in Achatius Kahl, a clergyman from Lund.

Fredrika Ehrenborg travelled to London in the autumn of 1852 in order to deepen her knowledge of Swedenborgianism – which had found wider reception outside Sweden. This was a year after Fredrika Bremer’s well-known visit to England. During the year she spent in London Fredrika Ehrenborg also investigated mesmerism by visiting clairvoyant mediums. Although this form of spiritualism was en vogue it was also controversial and not always looked upon favourably by the New Churchers. She published her impressions from her English travels in Några bref från England 1852-1853. She attempted to convey the spiritual discussions of English and American followers of Swedenborg in the journal Något nytt. Läsning om och för en ny tid, from 1856 and 1859. During the period of 1855-1856 Fredrika Ehrenborg travelled to France, Germany, and Switzerland, and recounted these journeys in 24 printed travelogues. She returned to England in 1857, which was the jubilee year of the New Church.

During her final years Fredrika Ehrenborg abandoned her interest in spiritualism and returned to pure Swedenborgianism. She had tried to disseminate these teachings in several publications but, given that they were often printed at her own expense, they were not as widely spread as they would have been by an official publishing house and bookshops. Everything she wrote was published anonymously, or under the pseudonym of ‘En onämnd’ (unnamed author). She did this in deference to her family who belonged to the high church and who viewed her as a heretic. Further, she was also anti-military which did not fit with the military upper-class circles within which she sometimes socialised.

Fredrika Ehrenborg’s publications were comprehensive. She anonymously published nutritional writings on how to make coffee from rye, barley or wheat, or how to make wine from Swedish berries. She also wrote sermons for children. Quantitatively speaking it was her various publications on and about Swedenborgianism which formed the majority. Her two-part Skildringar ur det huslifa lifvet, from 1845-1846, come closest to being fiction. Her 1873 Lefnadsteckning, from the final year of her life, as well as her surviving diaries and letters, currently form the most accessible material which can help our understanding of this characterful woman today.

Fredrika Ehrenborg died in Linköping in 1873. 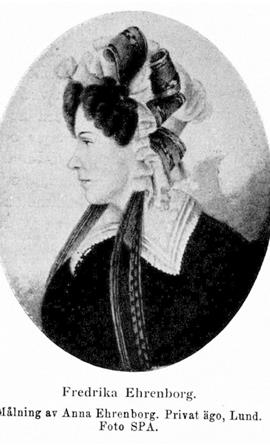